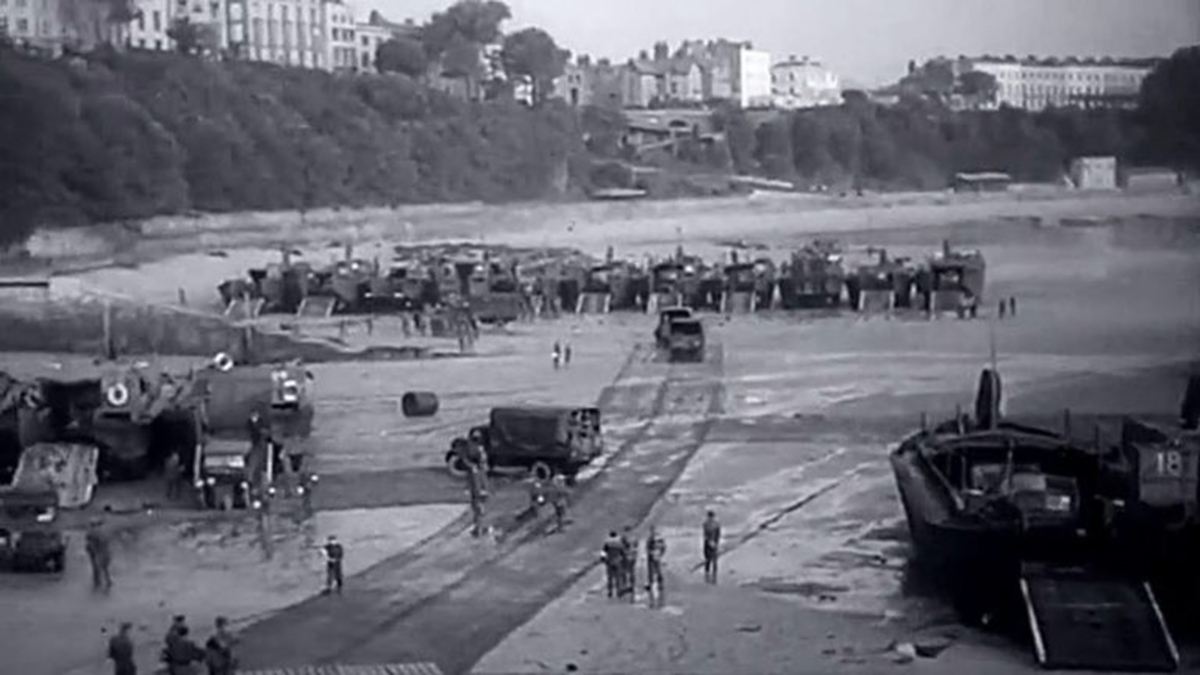 LIKE the rest of the world, Pembrokeshire holds some incredible stories and history from the days of World War 2.

Many of these stories are personal and cherished by families who had brave relatives fight for the freedom of the world. They’re honoured on plaques and memorials, and in family photo albums, in quiet dignity.

Some of these stories are bigger than personal pride and tragedy, however, including the largest blaze since the Great Fire of London, sinking German U-boats, and preparing for the D-day landing with Winston Churchill drinking tea at local pubs.

The brave men and women who gave their lives will never be forgotten and these stories will live on forever.

In 1940 three Luftwaffe planes bombed Pembroke Dock and sparked what is believed to have been at the time the UK’s largest fire since the Great Fire of London.

On Monday, August 19th, the German planes crept along the Pembrokeshire coast, taking aim at tanks holding millions of gallons of vital fuel after 3pm.

Ted Owens, then 16 at the time, was a messenger boy for Pembroke Dock Fire Brigade.

He recalled the moment the bombs hit: “I actually seen the bombs dropping and hit the tanks. The next thing, we have seen these four black things coming down – huge explosions.”

One of the 12-tonne tanks caught alight and the blaze spread, despite the efforts of fire chief Arthur Morris and his team of part-time firefighters, with hurried appeals sent out to brigades across the country.

More than 22 brigades and 650 men from across the UK were needed to quell it, with five from Cardiff losing their lives.

“You could see this pall of black smoke going up and into the air,” Mr Owens said, adding it was believed the cloud was visible from Swansea.

“This is in the days of the auxiliary firefighters, basically men off the street who were trained locally,” he said.

“If you look at their kit, it was nothing short of a boiler suit, a pair of Wellie boots and the tin hats that soldiers wore in the war. The lucky ones had an oilskin as well.”

In total, the blaze caused 1,100 injuries with dozens of firefighters hurt and overcome with exhaustion.

The five killed – Frederick George Davies, Clifford Miles, Ivor John Kilby, Trevor Charles Morgan and John Frederick Thomas – are remembered on a memorial at the site of the inferno.

Of the 18 tanks at the Llanreath Oil Tank Depot, 11 were destroyed and 33 million gallons of oil lost before the fire was eventually extinguished in September, 1940.

In his book “Pembrokeshire Under Fire” local journalist Bill Richards of the West Wales Guardian described how the home of a Dr and Mrs Harvey was wrecked in the bombing. Dr Harvey was seriously injured and his wife died. Thankfully, their child survived relatively unscathed.

Richards wrote: “The baby escaped unscathed due to the presence of mind of Mrs Harvey who, although partly buried by the debris, and on the point of collapse, threw the child clear of the fire into the passage. There it was found uninjured hanging by its clothing on a clothes peg on the wall.”

The Battle of the Atlantic

Pembroke Dock also played an important role in the war when it came to battling the German submarines known as U-boats.

This became known as the Battle of the Atlantic. At its core was the Allied naval blockade of Germany, announced the day after the declaration of war, and Germany’s subsequent counter-blockade. The campaign peaked from mid-1940 through to the end of 1943.

German submarines were the Allies’ principal threat at sea, and Winston Churchill once wrote: “The only thing that really frightened me during the war was the U-boat peril.”

Skirmishes in the Atlantic continued until the war ended in 1945, but the Allies sank particularly large numbers of U-boats in May 1943, effectively winning the Battle of the Atlantic.

Pembroke Dock was the base for the Sunderland flying boats, and at one time 99 of the planes were stationed at its RAF station.

Nearby Milford Haven was a major convoy assembly port as well as the base for naval escort vessels.

Thousands of American soldiers were also stationed in Pembrokeshire during the run-up to D-Day.

Jantzen was part of the extensive preparation and planning for Overlord. It took place in Carmarthen Bay between 22 July and 5 August 1943. It was the first exercise undertaken to practice landing on an enemy beach and unloading supplies.

Ships were loaded with thousands of tonnes of supplies and military equipment and set sail from Tenby, Swansea and Port Talbot destined for the south-east Pembrokeshire coast. The beaches were chosen for their similarity to those in Normandy.

As on D-Day itself, the beaches were sub-divided into sectors. Over the 13-day exercise, 16,230 tonnes of supplies were brought ashore. That may seem a lot, but it was significantly less than the 23,400 tonnes target.

During the exercise security in the area was strictly implemented. Entry into the designated area that included Tenby and Saundersfoot was denied to all non residents unless they had a special pass.

Tenby was placed under a curfew and the carrying of cameras, telescopes or binoculars was forbidden. All civilians had to carry their identity cards at all times. The curfew from dusk to dawn was in operation from July 12th to August 9th. Mail, telegraph and telephone lines were subject to censorship during this period.

The evaluation of the exercise concluded that the exercise failed to fulfill its objectives. Equipment failures were common with one barge leaking significant amounts of petrol on Saundersfoot beach. The Alligators used to unload the beached vessels all eventually failed and perhaps most significantly the amount of stores unloaded fell well short of the target set.

According to local folklore, Prime Minister Winston Churchill was one of the interested spectators who witnessed Exercise Jantzen and he drank tea at local establishments.

Bentley Howell recalled one such tale to the BBC: “In august 1943, I was a mere 8 months old, so I remember nothing of WW2. However, my half brother who was about 40 years older was at the time the licensee of the Wiseman’s Bridge Inn, Permbrokeshire. In his old age, he used to tell me of his wartime memories and particularly about the day that Winston Churchill called in for a pot of tea.

“The publican, John Henry Mathias, or ‘Jack the Bridge’ as he was affectionately known, was appointed a Coastguard because of his local knowledge, and although the whole area had been sealed off for security reasons and a 10pm curfew imposed, Jack was exempt from this and wandered at will. Officially, the troops were not allowed to drink, but for 1s 6d they had all they could eat – home killed ham, eggs, fried bread and apple tart. Jack entertained them with tales of a ghostly monk who roamed the tunnels between Saundersfoot and Wiseman’s Bridge.

“One day, several large staff cars swept down the narrow lane to the pub. It was about 3pm, but in those days the pub was open all hours. A blonde woman in ATS uniform carried out ‘a plain Welsh tea’ to the party of about 15 high ranking officers – later it was learned that she was Sarah Churchill; Winston Churchill surveyed the troops on the beaches together with Admiral Viscount Mountbatten.

“It was rumoured that Eisenhower was also present.

“For several years after the War, the letter signed by Churchill, thanking the licensee for his hospitality hung on the wall in the pub premises.”

In 1944, the leader of the 110th Regiment wrote to the mayor of Haverfordwest to apologise for his troops’ “unceremonious departure” and thanked people for their hospitality.

The 110th Regiment suffered major losses during the attack, with only 532 of its 5,000 soldiers fit for duty at the end of the war after they had advanced through France and Belgium.

“We’d wait for them in Milton and as they’d go through they’d throw gum and Lucky Strike cigarettes to us.”

Air Commodore Adrian Williams, the Air Officer for Wales, added: “I think it’s really important to remember the service and sacrifice of people from the Second World War.

“There’s a lot of connections between Pembrokeshire and the RAF. We remember the US serviceman who came through Pembrokeshire in 1943-1944 which was a critical time in the nation’s history as they played an important contribution in D-Day.”

95-year-old Gordon Prime from Jameston, who served with US servicemen during the war, recalled during a memorial: “I feel very emotional, the American lads I met during the war were so generous, kind and so friendly. I used to love being with them.

“All the Canadians wanted to do was fight, but the Americans were lovely lads. I’m thinking about them all today.

“They made a terrible sacrifice, those lads. We are here today and thank God to those that we are.”

Apprenticeship Ambassador is passionate about the Welsh language

A fateful day: Death on a cliff top