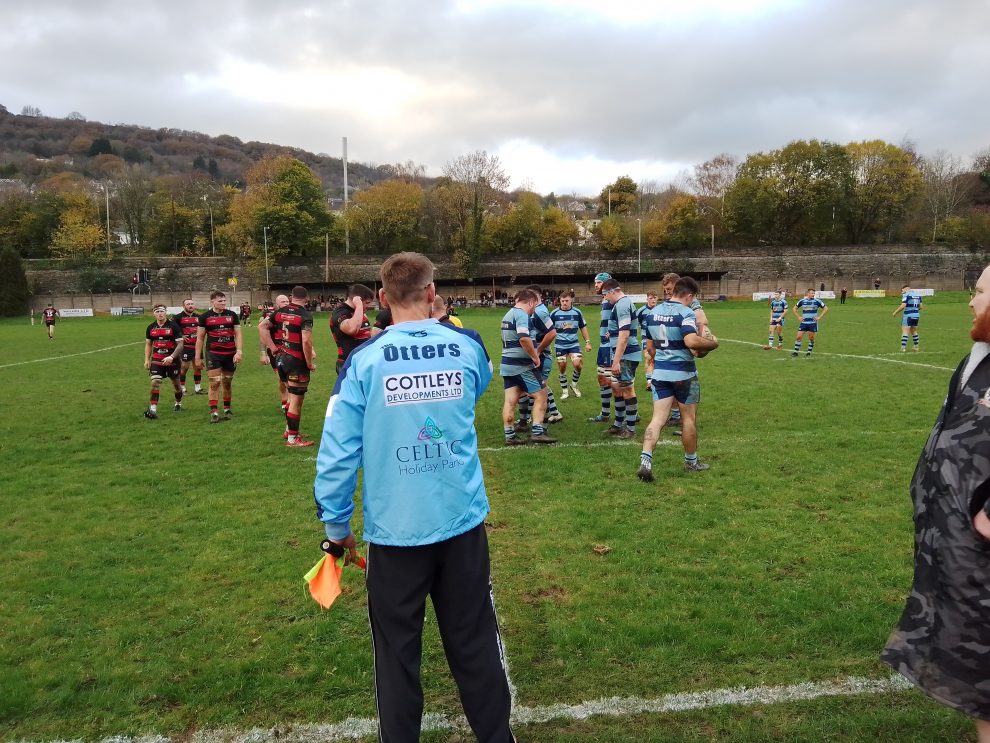 Narberth made the journey to Ystalyfera on a beautiful autumn day hoping the sunshine would set up an entertaining encounter.

The Otters have had a very successful first part of the season and a win would have made it 6 wins and 2 losses which would mean a top 4 slot for the Otters in the league.

Ystalyfera, by contrast, have had a very difficult time of late winning only 2 of their games. However the Narberth faithful knows only too well that a wounded Ystalyfera is a dangerous Ystalyfera.

The game began in a particularly physical manner with big collisions causing errors and turnovers galore. Neither team could gain any real advantage with both teams threatening but not quite crossing the whitewash.

Narberth eventually did break the resolute ‘Fera defence with Josh Davies crossing from close range after some powerful carries from Narberth debutant Caleb Salmon. Lewis Gibby and Ianto Griffiths also came to close to scoring with well-judged linebreaks as the Otters started to gain momentum.

However, ‘Fera fought back and a defensive lapse led to an easy ‘Fera try which was duly converted. This sparked the Otters to continue with their hard carries, again Salmon paving the way for numerous Narberth attacks, only for the last pass to go astray or for Narberth to squander the opportunity by turning the ball over.

Narberth managed to gain some useful territory and some good interplay down the left touchline saw Josh Davies sprint clear to score in the corner.

However, Narberth just could not break free and numerous errors were causing some unease among the away team’s coaching staff.

A stern half-time team talk ensued with Narberth supporters not entirely sure how they were behind on the scoreline after dominating lineout, scrums and posession.

The Otter’s attack never really functioned as the team seemed somewhat lacklustre in their endeavour and urgency.

An early “Fera try at the start of the second half galvanised the Narberth side who fought back upfield with Ilan Phillips and Jordan Roberts finding gaps in the defensive line to set Josh Evans in for his try.

With 15minutes to go the game swayed back and forth with Narberth seemingly losing the bounce of the ball at every turn and many lineout decisions not going their way. Narberth’s defence was resolute for long periods of the second half with Ystalyfera applying the pressure.

The last 5 minutes became a whirlwind as time and time again Narberth were denied a scoring opportunity either by some excellent ‘Fera’ defence or a strange refereeing decision.

Narberth chose not to shoot at goal when awarded a penalty with George McDonald taking a quick tap and running amongst the ‘Fera’
forwards- the very next phase saw Ystalyfera steal the ball but no ‘advantage’ was awarded to the Otters.

With little time remaining Ilan Phillips, Jordan Roberts and Josh Davies linked beautifully to bring play form within their own 22 all the way to the opposition tryline only for ‘Fera to make a try-saving tackle and steal possession.

With the game almost over Josh Davies went on a mazy run beating defenders and linked with McDonald to race clear- only for the referee to call them back for a knock-on which confused the Narberth players and supporters alike. This was essentially the last play of the game and no-one could argue that Ystalyfera were fully deserving of their win as they were undoubtedly the better side on the day.