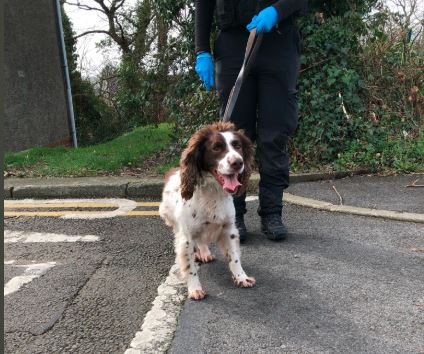 POLICE carried out seven drugs warrants in Carmarthenshire as part of a day of action targeting criminals intent on causing harm in their communities.

Dyfed-Powys Police officers in Llanelli, Ammanford and Carmarthen were among those tackling the use and supply of illegal substances across the county on Wednesday, March 17, while colleagues focussed on traffic offences, gathering information around dog thefts, and the use of the rail network for drug supply.

“The operation used an overt policing presence within towns and on roads across the county to provide reassurance through engagement, and a covert presence for enforcement.

“Not only did we see direct results throughout the day, but officers also gathered intelligence and information that will assist in planning future operations.

“I would like to thank all officers involved for their dedication, professionalism and the part they played in securing some very positive results.”

Seven warrants were carried out under the Misuse of Crime Act, with four people arrested.

The first took place at an address near Carmarthen town centre, where approximately £2,000 was seized under the Proceeds of Crime Act. A 34-year-old man was arrested on suspicion of possession with intent to supply class B drugs. He has been released under investigation pending further enquiries.

Llanelli response teams targeted two houses in the Hendy area simultaneously, where suspected controlled drugs were seized from both properties, along with a quantity of cash. Officers are progressing enquiries.

A fourth warrant was carried out at an address in the Tyisha area of Llanelli, where three people were arrested on suspicion of possession with intent to supply and released under investigation.

A further three warrants were executed at addresses in Ammanford and Llandeilo.

Two people were referred for consideration for a diversionary scheme for cannabis possession, and enquiries are ongoing trace the occupant of an address in Llandeilo, where a cannabis hydroponic set-up and quantities of class A, B and C drugs were found.

Insp Ross said: “Follow-up patrols were carried out in the streets where these warrants took place, and we hope this offers reassurance to the community that we take the use and supply of illegal drugs very seriously, and will act on any information we receive about this activity.”

Llanelli Neighbourhood Policing Team (NPT) carried out joint patrols with representatives from DDAS – Dyfed Drug and Alcohol Service – which resulted in two referrals to the service, while a Safer Street initiative was launched in Ger y Llan.

Llanelli Rural NPT, along with Carmarthenshire Roads Policing Unit, Carmarthenshire Rural Crime Team, Natural Resources Wales, RSPCA and VOSA carried out an enforcement and intelligence gathering operation in support of Operation Rhinestone – the force’s operation into dog thefts – on the A484 near Trostre.

Insp Ross said: “Around 150 vehicles were stopped over the course of the day. Two vehicles were seized for having no insurance, several traffic offences were identified, and several prohibition notices were issued by VOSA.

“We would like to thank all our partners for their support during the day.”

A number of vehicles were offered advice and guidance on the need to register as a waste carrier.

One person was believed to be carrying waste without being registered to do so. NRW also visited a waste site with assistance by police. Both are being investigated further by NRW.

Jonathan Jones, Environment Team Leader, Natural Resources Wales, said: “We continue to work with our partner agencies at multi-agency days of action such as these and thank Dyfed-Powys Police for their on-going support.

“NRW’s role at this day of action was to carry out checks and offer advice around preventing and detecting environmental crime.

“I would remind those who carry or need to dispose of waste as part of their business to ensure that the person carrying the waste is registered and that the waste is taken to an appropriately authorised site.

“Failure to do so could result in the owner of the waste being prosecuted, as well as the illegal waste carrier.

“Information on who needs to register and how is available on the waste permitting section of our website, or by calling 03000 653000.”