Home » Mumbles pier – Its history, the present, and future hopes 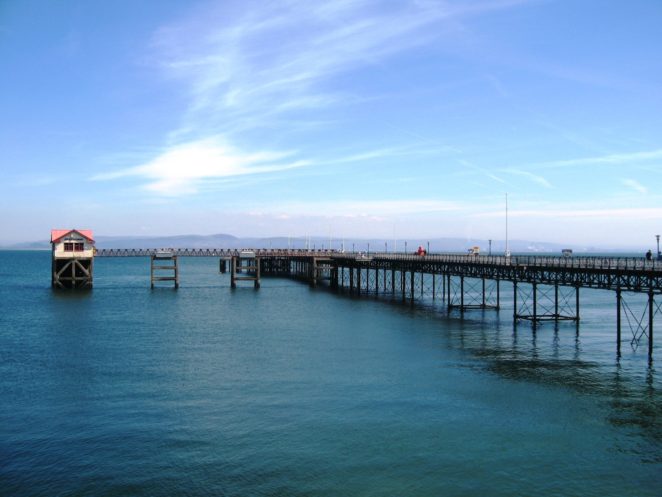 AS ONE of the most beautiful parts of South Wales, it’s likely that you’ve been for a day out in Mumbles to take in the relaxing atmosphere, wonderful sights, and friendly residents.

And, if you have been to Mumbles, a stop at Mumbles Pier is almost considered a necessity. Now under private ownership, one of the few piers left in the UK which can boast that, its history goes back to 1898.

Nearly 850 feet in length, enough to park 26 double decker buses in a row, it was built by the
Widness Foundry Company at a cost of £16,000.

A large crowd from the surrounding area gathered to watch the official opening, with the 3rd Glamorgan Volunteer band playing a selection of tunes on the band-stand. Local schoolchildren were given a half-day holiday in celebration of these major events.

The Lady Margaret, the first steam boat to land passengers on the pier, arrived at 2pm and brought with it around 700 visitors from Bristol, Clevedon, Cardiff and Penarth.

The steam boat, which was to run regular trips to Mumbles Pier throughout that season, departed at 4:30pm.

Following this, the festivities continued at the new Mermaid Hotel, in which 80 gentlemen were entertained by Sir John Jones Jenkins MP, the Chairman of the Mumbles Railway & Pier Company.

Jenkins said that as well as being a tourist attraction to bring more footfall to the area, he saw a large commercial opportunity.

Its geographical location, with a bay on the one side laid out for commercial purposes, with a large industry capacity, complimented by its natural beauty, stood out to him.

He referenced the fact that as development continued in Cardiff, thanks in part due to the growing coal trade, they were making very large docks to accommodate the largest ships of the era.

Newport, as well as Liverpool, were doing similar, with ships of up to 1000ft long docking there.

Swansea, meanwhile, had nowhere near this capacity, and he wanted to accommodate larger ships in the area – up to 720 feet.

Following a long speech, he raised a toast to the “success of the Mumbles Railway & Pier Company”.

Despite these ambitions, the pier’s history is mostly recreational, as Swansea Docks did not appreciate the competition, and the industrial boom of the area did not come to fruition.

The 1904 Centenary souvenir book of the Mumbles Railway, recorded that ‘The Pier has become, without doubt, the most popular resort in the locality’ and The White Funnel paddle steamers of P and A Campbell, such as the ‘Brighton’ would call to take trippers across to Ilfracombe and other ports along the River Severn and Bristol Channel.

The end of the Pier became home to Bandstand Concerts and on the landward side was a Pavilion, both of which attracted large crowds. The ‘Mumbles Press’ on 13 June 1911, featured events celebrating the Coronation of George V, as well as other attractions.

People arrived in great numbers on the Mumbles Train, which on the fine day of August Bank Holiday Monday 1913, carried 48,000 passengers.

The large double‑decked first and second-class carriages and additional, uncovered single‑decked third‑class coaches, which became known as cattle trucks, could carry over 1000 passengers at a time.

The six‑mile journey took an hour at an average speed of 7‑8 mph. and the passengers sitting outside on the top, would be surrounded by smoke and cinders and covered in smuts, thrown up by the steam engine.

As it travelled along, children would turn cartwheels or somersaults alongside the track, calling ‘a ha’penny or a penny‑O’, hoping to be thrown some coins in reward.

In 1940 the pier was sectioned by the military in case of use for enemy landings. Large parts of the deck were removed to this end and with nationwide rationing of steel and timber the pier was left to decay for years until the structure was returned to AMECO 1948.

At that time the company’s Managing Director, Mr Stan Bollom set about and ambitious restoration of the structure as well as the construction of a new landing stage for up to 3 ferries at any one time.

Opening in 1950 and with a new amusement arcade and café built at the entrance the pier proved to be popular with visitors of all ages.

Unfortunately the ferry services were unviable and ceased in 1965 but the fishermen made good use of the landing stage.

The following years proved to be successful with the pier hosting many different events.

However like so many piers escalating maintenance costs took its toll and the pier was closed on 1 October 1987 for a £40,00 refit, when the steel lattice work beneath the centre bay and the steel around the entrance was replaced.

In 2012 the RNLI began work on a new boathouse to house a new Tamar class vessel with much greater capabilities than the older boat. The refurbished head of the pier along with a new boathouse and fishing platforms opened in 2014.

In 2017 a new restaurant, chip shop and gift shop was opened in The Pier Hotel building, as well as a gallery and over the years the Anglers Shop has been extended.

Like most businesses, Mumbles Pier has been shut for the majority of the pandemic, but the family-owned operation is well placed to make a big comeback as restrictions are once again lifted during the vaccination roll-out.

In January, the exciting news of two new pavilion buildings on the Grade II listed pier which will become retail, bathroom and cafe units.

In addition to this, the former offshore lifeboat house, at the end of the pier, will be converted into a brand new restaurant.

New access and gates will also be added during the work, to modernise the facilities further, whilst maintaining its historic elements.

The planning documents cited benefits such as “creating additional jobs on site once the development is operational and construction-related jobs will be created during the construction period.”

A spokesperson for the pier said following the news: “We’re delighted to have reached this important approval stage. It has taken a bit of time but we wanted to replicate period features and a Victorian theme.

“Work is currently on hold, for obvious reasons, but we’re hoping to resume as and when it’s safe to do so.”

Dr Martin O’Neill, the chairman of Mumbles Community Council, said: “I welcome the maintenance and the restoration of an historic and valuable site to Mumbles, but at the same time it is very important we monitor the situation and make sure the area is not overdeveloped.”

Councillor Myles Langstone added: “As far as I’m concerned, developments are welcomed as long as they are in-keeping with the character of the community.

“The pier is one of the most iconic points in Mumbles that comes to a lot of people’s minds when thinking of Mumbles. Protecting that and enhancing it is key.”

As if these new developments weren’t enough, the pier boasts a fantastic reputation for its customer service, with glowing reviews all over the internet about the quality of the attraction for a family day out.

Shelley Vaughan praised the pier saying: “What a wonderful place this is, we go here quite regularly to take the dog for a stroll. The lovely café where you can take your dogs in which is a godsend. Beautiful views – what more can I say.”

Ken Thomas agreed: “Fantastic evening down at the Pier. Sat down to eat in Copperfish. Party of 7. Great service and food. Could be the jewel in the Mumbles crown with a few minor additions.”

And Zeta Madden is just one fan of all the development at the pier: “I’m loving the changes being made to the pier recently! Lovely place to while away a few hours! Food is lovely and I would recommend the salmon salad! Also pleased that dogs are welcome!”

Despite the Covid hurdle, which all businesses are facing, the near future is very bright for this pier with a long past, and its place as a must-see attraction for Mumbles is sure to be secured for a very long time to come.