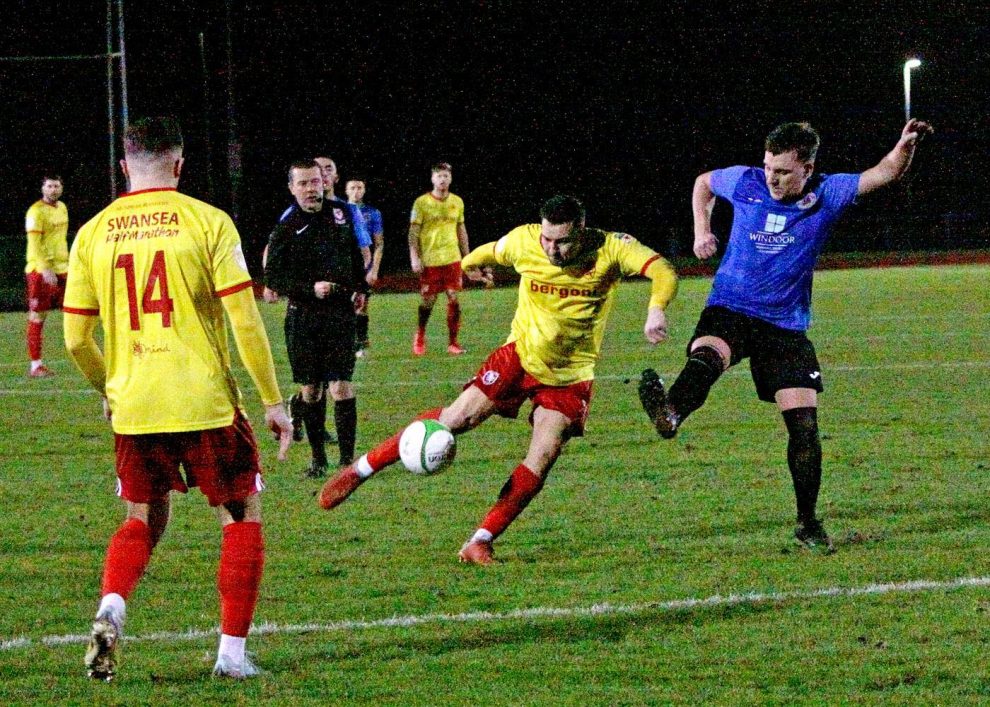 MUMBLES Rangers struggled to find their rhythm in the first half of this Ardal Southern South West league home fixture against Cefn Cribwr FC.

It was the away team who started brightly and they were on the front foot. They had a good pace and intensity to their game. Rangers struggled to get a foothold in the game.

It wasn’t really a surprise to anyone when Cefn Cribwr took a deserved lead in the 16th minute of this game when Jamie Isidore-Marlowe slotted the ball into the Rangers net with the aid of the goal frame which deceived the efforts of goalkeeper Sam Goodwin to keep the ball out as the ball bounced over the goal line.

Cefn Cribwr had their tails up and pushed forward at every opportunity and were unlucky not to double their lead. It took a point blank save from Rangers stopper Sam Goodwin to keep the score at 0-1.

Rangers were very much on the back foot and forced into a rear guard action on several occasions to keep out the visitors.

As the first half was drawing to a close Rangers finally managed to put together several passes from a Declan Banfield throw in before striker James Loveridge’s lofted effort on goal was cleared for a corner.

Rangers centre back Liam Brown headed the ball from the resultant corner from close range but couldn’t find the finish he needed as the ball went straight into the arms of the goalkeeper. This was Rangers best passage of play in the first half.

The half time whistle blew with Rangers supporters left discombobulated as to their team’s performance in the first half.

Rangers came out in the second half determined to up their game and become more competitive in winning the ball.

Rangers full back Declan Banfield epitomised the renewed spirit and in harness with winger Taylor Smith were starting to cause the visitors a few problems down the right flank. Rangers were starting to win the 50-50 tackles in midfield as well and create some good passing moves.

Rangers endeavours paid off in the 53rd minute when Rangers captain Chrissy Allen scored to level the game up at 1-1.

It was Rangers turn to press their opponents and it took some good defending to stop the Rangers attacks.

Cefn Cribwr however were always a threat on the counter attack and Rangers were left to make some last ditch stops to end the threats posed on their goal.

The game turned eventually into a stalemate with neither side able to get the upper hand.

The final whistle blew and a point a piece was probably about right as it was certainly a game of two halves.

Both Managers would look back at key moments where their respective teams could have won it.