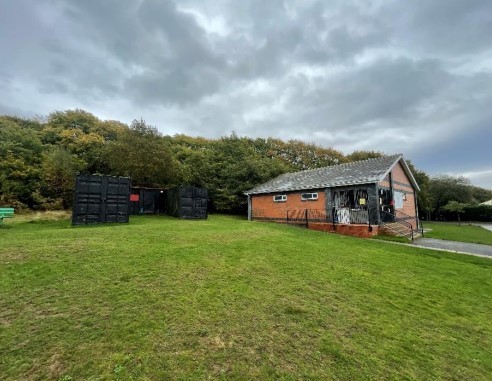 A FOOTBALL club with 26 teams with ambitions to rise higher wants to build a two-storey clubhouse with space for community groups to use.

Pontarddulais AFC’s players use two pitches at Coed Bach Park, Pontarddulais, Swansea, and get changed in a single-storey changing room building which the club said was no longer suitable.
The new clubhouse would include two large changing rooms, a coffee area and, upstairs, a room which could be used by other groups. There would also be toilets, and ground floor and first floor balconies.

Swansea Council’s planning department is considering the club’s application, which was submitted following dialogue with and advice from planning officers.
Speaking about the proposals, the club’s junior chairman Geraint Thomas said: “We are the biggest club in the town, but we don’t have our own clubhouse.”

He said the club had to use the town’s rugby and cricket club facilities to host presentation events.
“A clubhouse has been much-needed for years – we are growing all the time,” said Mr Thomas. “Obviously we want to go higher up the leagues.”
He said the club had been going for 50 years and had 26 teams – with one in the West Wales Premier League – and that it had invested in pitch drainage, among other things.

It is believed the project could potentially exceed £1 million. Grant funding would be sought if planning consent was secured.
The clubhouse would provide refreshments to supporters and players post-match on weekends, according to the plans, rather than them having to go to the cricket club, and the existing changing room building would be kept.
A planning statement submitted with the application said Coed Bach Park had two parking areas, and that the football club had an arrangement with another group in the town to use a temporary showground parking area with 52 spaces, accessed from Pentre Road, when larger than normal attendances were expected.