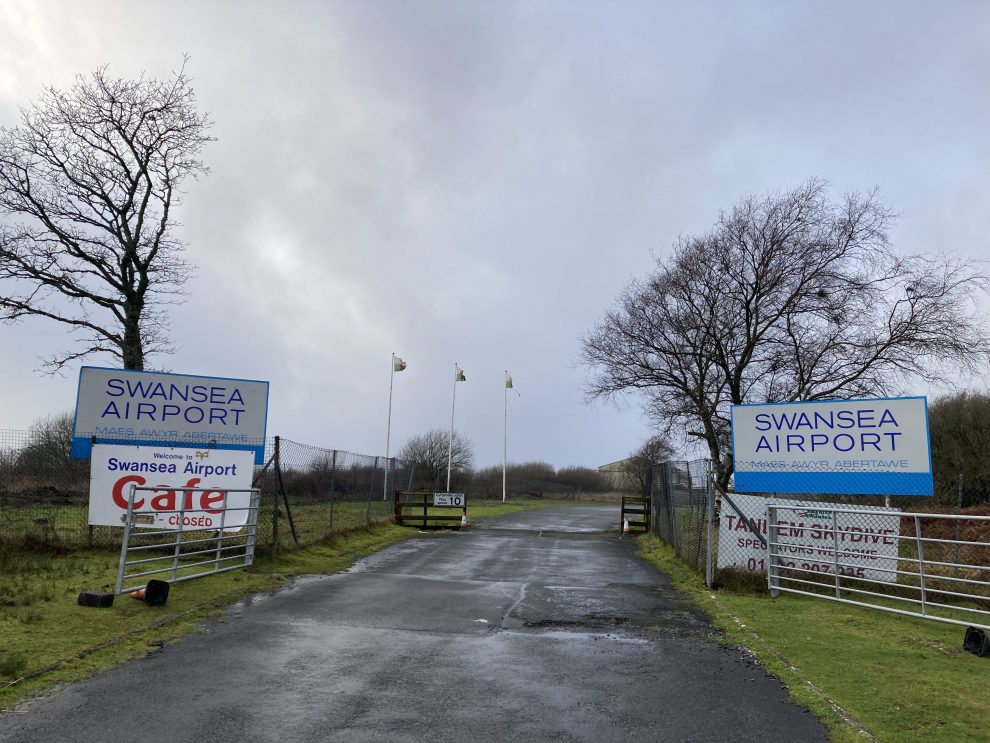 SENIOR officials at Swansea Council will discuss a potential new lease with the operator of Swansea Airport, which said this week on social media that passenger services between the city and Exeter would start at the end of March.

There has been opposition to a renewal of Swansea Airport Ltd’s lease, and this was voiced at a meeting on January 19 where the council’s cabinet decided behind closed doors to negotiate a new one with the company.

Some of the discussions surrounding the airport were held in open session, and the council went on to confirm the decision just a few hours later.

The facility at Fairwood Common, Gower, is owned by the council, but it doesn’t want to run it on cost and environmental grounds. The airport was leased out in 1991, with Swansea Airport Ltd taking it over around 10 years later. The lease expired in 2016 but the existing arrangements have continued.

There have been many complaints about the airport, a report before cabinet said, and two groups have come forward with proposals to run it. But the council said Swansea Airport Ltd had significant legal rights to have sought a renewal.

Officers will now start negotiating a potential new lease with the operator with the aim of creating a more successful airport which better meets the needs of users.

Speaking after the meeting, Cllr David Hopkins, cabinet member for corporate service and performance, said: “The facility still requires ongoing investment by the tenant in order to attract or retain new operators and customers, and we will expect investment to continue.”

During the open session, three members of the public and a councillor asked questions about the airport, with three of them raising concerns.

First to speak was Bob Oliver, chairman of a group called Swansea Airport Stakeholders’ Alliance, which wants to take over the running of the airport and which, he said, had consulted widely over the last 18 months.

He said stakeholders saw the “enormous potential” of the 450-acre site. He claimed that the current commercial model of operation was “widely felt to have failed” following “decades of mismanagement and neglect”, causing a loss to a public asset and reputational damage to Swansea.

Mr Oliver said the alliance’s proposed not-for-profit enterprise would lead to environmental and economic benefits as well as a modest and sustainable aviation facility.

“This opportunity will be lost if the council accept this report,” he said.

Mr Oliver questioned whether sufficient progress had been made by the current operator in terms of lease conditions relating to how often it was open, the absence of any food or drink facilities, and the state of one of the hangars, among other things. He also asked why the report hadn’t mentioned that the council had, he claimed, served a statutory pre-forfeiture notice on the tenant in respect of breaches.

Mark Anderson, a Swansea resident and employee of regulator, the Civil Aviation Authority (CAA), referred to a section of the cabinet report which said the airport “has always been subject of complaints and expressions of dissatisfaction” in connection with its management.

Mr Anderson, who was speaking as a resident and not in relation to his CAA role, said the report did not put forward an explanation for this. He also said it did not recognise what in his view were issues with the airport’s operation and maintenance.

A third member of the public, airport user Alan Bailey, asked the council to ensure it was kept open seven days a week, as per the lease, rather than five.

The council had sought internal and external legal advice prior to the cabinet meeting – and Mayals councillor Chris Evans asked if this had included a visit to the airport and an inventory of its assets.

Cllr Evans said he had been to the Fairwood facility on January 18 and that “it’s in a very, very sorry state”.

Cabinet members were reminded that the current operator, Swansea Airport Ltd, had legal rights to a renewal of the lease, and that the council had to be mindful of the landlord-tenant relationship.

Cllr David Hopkins said the authority had “very limited grounds” on which to oppose the lease renewal. He said it could not comment on any specific lease breaches, and that operational matters were essentially a matter for the tenant and the CAA. But he said there were still breaches, that there had been historic failings, and that the council had become involved to improve the situation.

Cllr Hopkins said he, council leader Rob Stewart and another cabinet member had visited the airport, and that the impression he got was of an improving picture. Cllr Hopkins said the council would, if it renewed the lease, ensure its position was protected, but that “onerous” lease terms would not be introduced unless specifically negotiated.

The cabinet report did recommend though that alternative lease terms were proposed and that the operator continued to invest in the airport.

Cllr Stewart said the two sets of legal advice it had received were “very clear”.

He said: “If we were to set aside that advice we would have to have very significant reasons for doing so, which do not exist.”

The Swansea Labour leader also called on a “very small number of people” to desist from “personal attacks on the integrity and ability” of council officers.

“I think the responsibility for all of us is to see a successful airport operating in the area beneficial for everyone, which is I think what everyone wants,” he said.

The CAA suspended the airport’s licence in 2019, but has since reinstated it.

Roy Thomas, the director of Swansea Airport Ltd, welcomed cabinet’s decision. “It’s good news,” he said. “Tremendous work has been done in the last three years. Hopefully we’ve got a new way forward.” He added it was “fingers crossed” for the Swansea to Exeter flights referred to on Swansea Airport Ltd’s Facebook page.