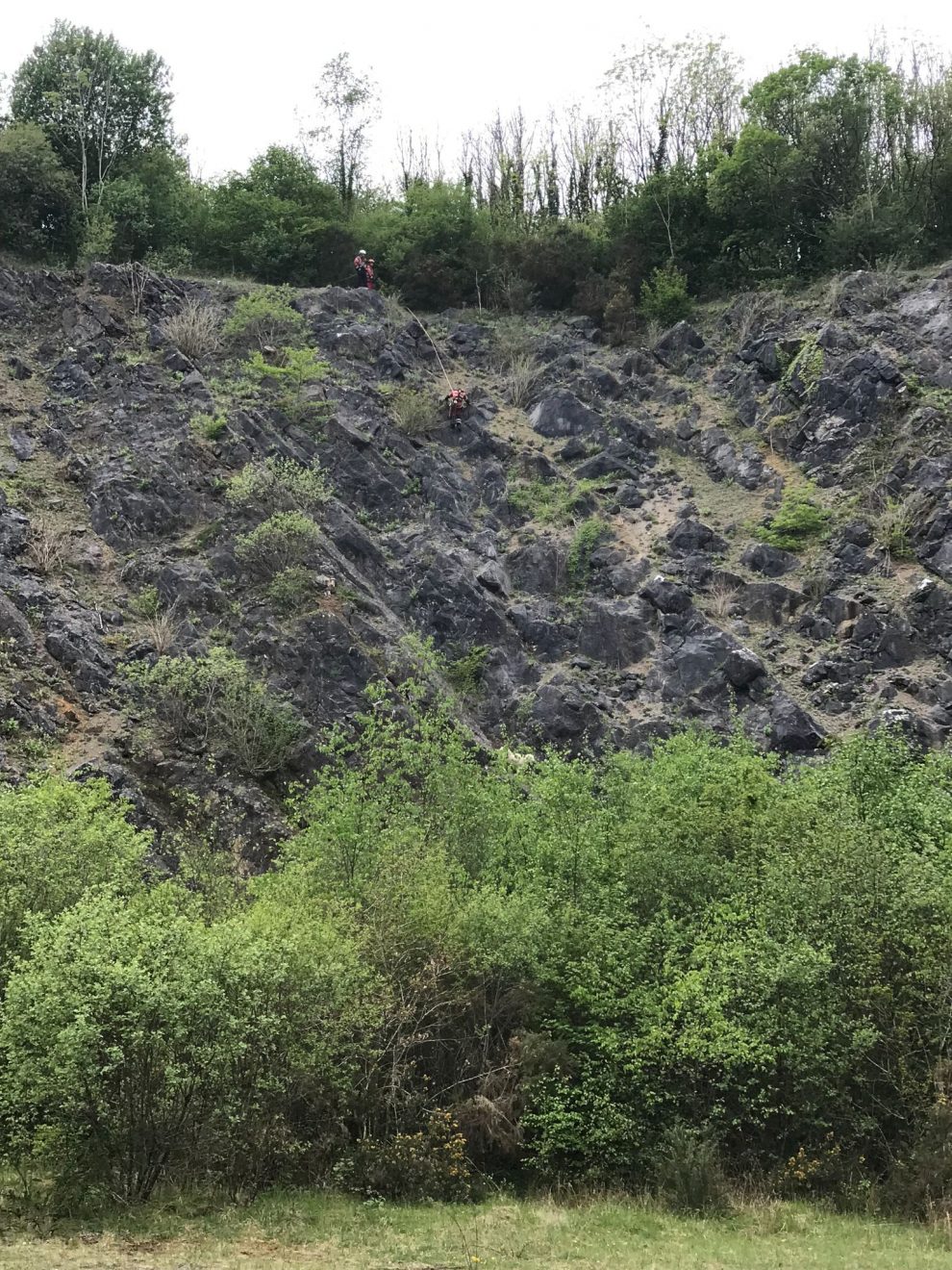 THE RSPCA is urging well-meaning members of the public to avoid putting themselves in danger by rescuing animals after a woman got into difficulty while attempting to reach a sheep.

The woman and her partner had gone to a disused limestone quarry at Ilston on the Gower Peninsula after seeing a Facebook post about the ewe, which had become stranded there on a narrow ledge.

She’d climbed about 12 feet (3.6 metres) up the pit to try and reach the animal but then panicked when she realised how high she was, and attempts by her partner to persuade her down were unsuccessful.

The pair were found on 9 May by RSPCA Animal Rescue Officer (ARO) Andrew Harris who, by coincidence, had gone to the quarry to look for the sheep after the charity had been alerted to her plight.

Along with her partner, he eventually managed to coax the woman down, before calling the Mid and West Wales Fire and Rescue Service for assistance with the stranded ewe. 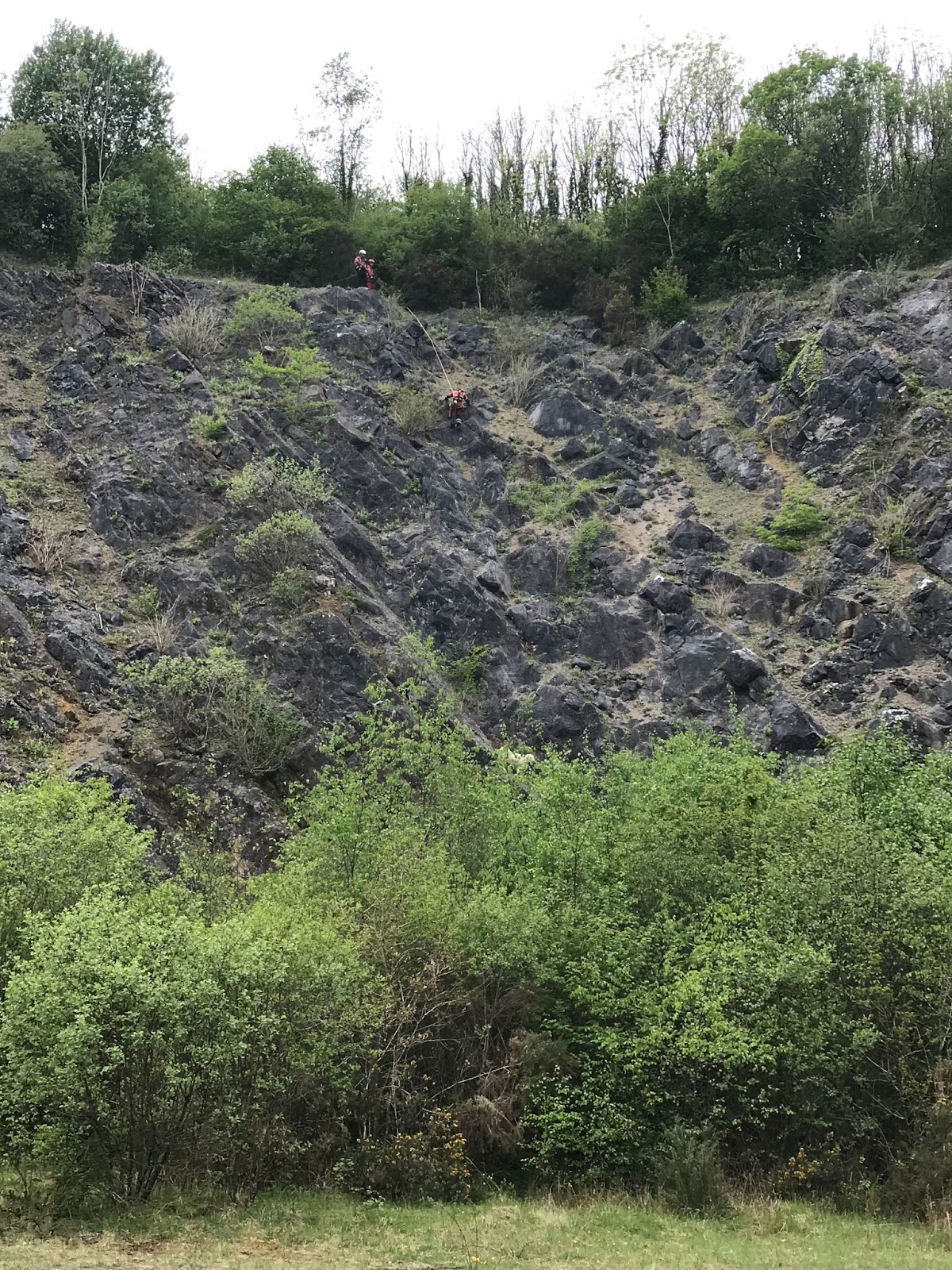 Specially trained officers arrived and abseiled about 50 feet (15 metres) down the quarry to reach the sheep, who was persuaded to leave the ledge before running off uninjured to rejoin her flock in nearby woodland.

Andrew said: “Apparently the lady had read about the sheep on social media and had gone to see what she could do; unfortunately she ended up climbing higher than perhaps she had anticipated and then panicked and was too nervous to come back down. However tempting it may seem, we would never encourage a member of the public to put themselves at risk to rescue an animal in a precarious situation like this.

“Wild animals can be unpredictable when they are trapped and stressed and we would urge people to call the RSPCA or the emergency services so that officers with specialist safety equipment and training can respond to free them safely.”

“It must have been an unpleasant experience for her, as well as the ewe, but I’m glad we were able to get both of them down safely.”

Station Manager Anthony Mathias, from Mid and West Wales Fire and Rescue Service, said: “I urge members of the public who come across an animal that is trapped in a dangerous location to call the RSPCA in the first instance. Do not put yourself in danger by attempting to rescue the animal. As a fire and rescue service, we are on hand to support the RSPCA at animal rescue incidents and have specialist teams that can carry out the work safely.

“During this incident, we deployed a level 3 rope rescue team from Pontardawe and a crew from Swansea West Station to gain access to the ewe. They worked professionally, in difficult and challenging terrain, to bring her to safety.”

The sheep is thought to have become stuck on the ledge after climbing down the quarry from fields above. She was ear tagged and enquiries will be made by animal health to see who she belongs to and whether steps can be taken to prevent the incident from happening again.

Whilst looking at how he could gain access to the quarry, Andrew also came across a lamb who had become stuck in a fence, which was also successfully released.