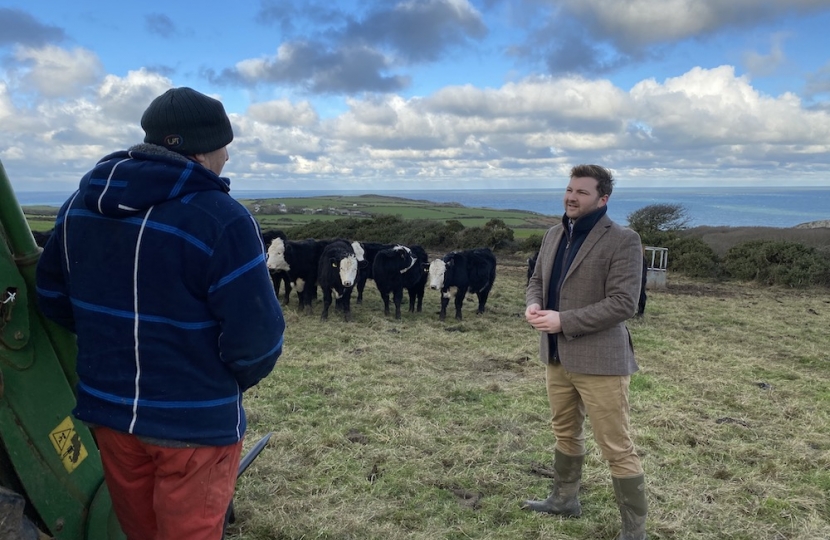 THE WELSH Government is making over £66m available for environmental improvements through farming, only a few days after the Shadow Minister for Rural Affairs called for future certainty for the scheme that will provide the funding.

Samuel Kurtz MS said to the Minister, Lesley Griffiths, on Wednesday that there was “nervousness” within the agricultural industry regarding the future of the Glastir Organic, Commons and Advanced agreements that are due to expire on December 13 this year.

He continued: “These agri-environment schemes play an important role within the Welsh agricultural industry, but farmers are now nervously awaiting an announcement as to whether these contracts will be extended for a further 12 months or more…

With the industry having first been told a decision would be expected in July, and then late summer, can you please provide clarity over the renewal of these schemes, to give Welsh farmers some level of certainty?”

At the time, the Minister failed to provide any re-assurances saying she was “unable to make announcement” until she had “some surety about funding” from the central government.

Despite not knowing whether funding would be available on Wednesday, September 15, when questioned by Senedd Members Lesley Griffiths made an official announcement by press release six days later.
On Tuesday, September 21, Ms Griffiths announced the Glastir Advanced, Commons and Organic contracts will be extended until December 2023.

The Minister also says it is the intention for the Basic Payment Scheme to continue until 2023, subject to the UK Government’s comprehensive spending review.

All existing eligible contract holders will be offered an extension via their RPW online accounts.
The Minister also announced a further £7m to extend the Farming Connect programme through to March 2023.

Lesley Griffiths said: “I am very pleased to make £66.79m available through Glastir Advanced, Commons and Organic contracts until December 2023.

“The programme is crucial in supporting our farmers and this extension will help us further enhance our understanding of the impact of Glastir actions and interventions and contribute to the development of the future Sustainable Farming Scheme.

“I am also pleased a further £7m funding will see Farming Connect through to March 2023.

“This will ensure support for a more professional, profitable and resilient land-based sector, as we deal with multiple challenges and opportunities, including reducing all greenhouse gas emissions to Net Zero by 2050 and the ever-changing trading environment for the industry.

“From visiting farms the length and breadth of Wales, I have seen first-hand the positive impact Farming Connect has on the livelihoods of our farmers and I look forward to seeing more benefits thanks to today’s announcement.

“Significant and important change is coming which will provide a stable and sustainable future for the industry and rural communities in Wales. In the meantime, the Basic Payment Scheme will remain in place up to 2023, subject to UK Government funding, to provide support for farmers as we work together to transition to the Sustainable Farming Scheme.”

The Shadow Rural Affairs Minister, Samuel Kurtz MS, responded: “This certainty will be welcomed by farmers and landowners, but they’ll be left scratching their heads as to why it’s taken this long to be confirmed.

“What the industry wants to see is both the UK and Welsh governments working together to deliver lasting change beyond that 2023 expiration and I look forward to engaging with the Minister, DEFRA, and the Secretary of State for Wales on this issue.

“I have always been of the view that farmers can help deliver positive outcomes for the environment while enhancing our food security. But for that to be achieved, they need help rather than obstacles.

“I’m pleased the Minister listened and acted following my questioning and I hope this is just the beginning for continued engagement and support for the industry. As we tackle climate change, agriculture can be part of the solution, because it certainly isn’t the cause.”

NFU Cymru President John Davies said: “I very much welcome this statement from the Minister. In a period of great uncertainty, it is excellent news that our Minister has used two key interventions to provide stability and continuity to Welsh farming at a time of significant upheaval.”
Mr Davies said “We now look to the UK Government, through the upcoming Comprehensive Spending Review, to provide the funding commitments required to ensure that our Minister can implement her policy intention to maintain the BPS at current funding levels for the next two years.”

Carbon trades are more lovely than a tree