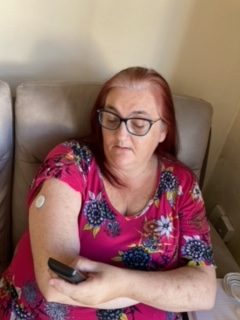 A TINY device described as ‘life-changing’ for people with diabetes has been recommended for routine use in the Welsh NHS. Health Technology Wales (HTW), which issues guidance on the latest medical procedures and treatments, says there is now evidence for the routine adoption of ‘FreeStyle Libre glucose monitoring’, enabling many more diabetes patients to manage their disease much more effectively and conveniently.

Diabetes is one of the biggest and increasing health challenges faced by the NHS. In Wales it’s estimated there are more than 200,000 people with a disease that can have a major impact on quality of life and can lead to serious complications, including sight-loss, stroke and amputation. In Wales, where the disease is particularly prevalent, 10% of NHS spending goes on treating diabetes and its complications.

Diabetes is a condition caused by the failure of the hormone insulin to keep levels of glucose (sugars) in the blood within a safe range, so monitoring these levels is essential in order to guide treatment and lifestyle choices. The ‘FreeStyle Libre Flash Glucose Monitoring’ assessed by HTW relies on a small sensor worn on the arm, under the skin. It monitors blood-sugar levels without the need for multiple, painful finger-prick tests through the day.

Patients get a read-out of their levels by simply passing a scanner over the sensor. The scanner is provided by an app in a mobile phone or similar device.

Even though the FreeStyle Libre is up to twice as expensive as finger-pricking, HTW concluded after a rigorous assessment of the evidence that the system is a cost-effective intervention which should be made available to everyone with diabetes who needs insulin for treatment.

The news has been warmly welcomed by healthcare professionals, charity Diabetes UK Cymru and patients.

Sarah Gibbs from Newport (see picture) has been struggling with diabetes for seven years. She injects herself with insulin several times a day to keep her blood glucose levels from getting out of control. She is one of the minority of Welsh patients who have been able to access FreeStyle Libre on the NHS and she says it has changed her life. ‘Before, I was digging into my finger seven or eight times a day to test my blood. That’s not nice, especially if you’re already feeling unwell. It was time-consuming and also embarrassing as I developed callouses on my fingers.’

Even with eight finger-pricks a day, Sarah says she found it difficult to understand how her blood-sugar levels were fluctuating and as a result they became dangerously high. So her consultant agreed to her using the flash glucose monitoring system (FreeStyle Libre). “It has improved my life so much. It’s so much faster, I can even scan my arm when I’m walking! I can look at my levels over 24 hours and it’s so much easier to understand them. My glucose levels are so under control now. Without it, I’d be lost’.

According to surveys carried out by Diabetes UK Cymru, fewer than half of people with the condition in Wales have used FreeStyle Libre, which became available in 2014. Wales has the lowest uptake of any nation in the UK. This should change following HTW’s guidance which now puts in place a stronger recommendation for its use in the NHS than in any other part of the UK.

Professor Peter Groves, Chair of HTW said: ‘Health Technology Wales has an important role in identifying new medical technologies that will improve the health and lives of people in Wales and at the same time represent good value for money for NHS Wales. The HTW appraisal of FreeStyle Libre has concluded that this technology has the potential to do just that and we hope that our guidance will ensure that patients with diabetes requiring insulin will have the opportunity to reap the benefits from easier access to this technology in the future.’

“ Flash glucose monitoring is an important tool that can help people to improve their quality of life, reduce hospital visits and gives patients more confidence in managing their condition.

We were pleased that Health Technology Wales recognised the impact this review would have on treatments for diabetes in Wales, and the importance of putting patient experiences at the heart of these decisions throughout the review.

The outcome of the review is a step forward in helping people across Wales to access the right technology to help them live better, happier lives with all types of diabetes.”

The National Clinical Lead for Diabetes in Wales, consultant Julia Platts, said the new guidance was a real advance. “It will help to increase the time spent in the glucose target range which will help to reduce some complications of diabetes. It will also help to reduce hypoglycaemia which is both unpleasant and may be very frightening and help to increase peace of mind.’

Robert Lee, who lives in Cardiff, is hoping the new guidance will be followed soon by the NHS. He’s been living with diabetes for 18 years but says his doctors have refused him access to FreeStyle Libre on the NHS on grounds of cost. He’s been paying for it himself, but at around £100 a month, he says he can only afford to use the system now and again.

‘This is a great recommendation but you have to influence the purse-string holders,’ he says. Robert believes this kind of glucose monitoring is particularly beneficial for active people like him, helping him to exercise more easily, drive with confidence and worry less about one of the disease’s most dangerous complications, low blood sugar levels known as hypoglycaemia. . “The experience is horrendous: palpitations; profuse sweating; lack of co-ordination. Hypos are really dangerous if you’re driving. Flash glucose monitoring would be such a massive benefit for people if they could get it on the NHS.’

HTW looked at data from more than a dozen randomised control trials and observational studies to assess the clinical and cost-effectiveness of flash glucose monitoring compared with the self-measuring of blood glucose (finger-pricking). The conclusion was that while more expensive, flash glucose monitoring was more effective. Currently the FreeStyle Libre system is the only one that delivers this kind of monitoring. The Chair of HTW, Professor Peter Groves said:

“The HTW Appraisal of FreeStyle Libre concluded that there was good quality evidence showing that the use of this digital technology in patients requiring insulin to treat diabetes results in better diabetic control. We were convinced that this is likely to lead to important benefits for patients in the short and long term and that the additional costs would be an effective use of NHS resources.”

Health Technology Wales (HTW) makes evidence-based appraisals of the clinical and cost- effectiveness of non-medicine health technologies. Based on the appraisals, HTW issues guidance on how innovations should be adopted by NHS Wales. It is funded by Welsh government and is independent, but works closely with Welsh health services.

Since its establishment in 2017, HTW has collaborated with partners across health, social care and the technology sectors. Its remit covers any health innovation that isn’t a medicine, such as medical devices, surgical procedures, psychological therapies, tele-monitoring or rehabilitation.

Who is responsible for the death of builders?

Covid-19 Warn and Inform Message over Castle Bingo in Neath