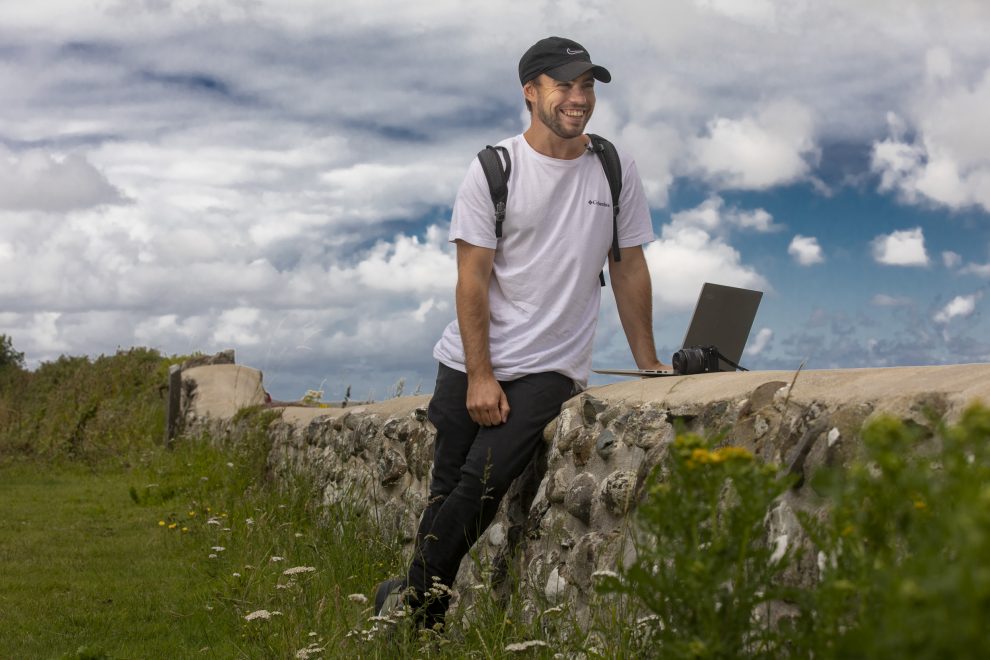 WALES WORLD CUP, exploits caused a meltdown on a Powys travel blogger’s website – with confused Americans asking if Wales is a country.

Kieren Windsor, who launched Wales Guidebook https://walesguidebook.com/ over the summer saw a 581% surge in traffic to his site after Wales kicked off their campaign against the USA.

The 30-year-old has now had to undergo a hasty upgrade to stop his website from crashing after his article, ‘Is Wales a country?’ quickly picked up traction from Yanks who took to Google for research.

Top enquiries have been What language do they speak in Wales? Is Wales England? Is Wales good at soccer? Where is Wales? How is Wales a Country?

And one US TV show went berserk following the country’s failure to beat Wales on Monday https://twitter.com/hashtag/USMNT?src=hashtag_click

It seems internet surfers found a lot of answers on Kieren’s blog, which provides a quirky but comprehensive guide to the Land of His Fathers and aims to turn up the gems hidden among the best-known holiday hotspots.

Kieren has now produced a list of the Top 10 links between the two countries as Wales was also the Land of their Fathers to many of America’s Founding Fathers.

At least five of the signatories of the Declaration of Independence were Welsh or of recent Welsh descent.

On top of that there have been at least eight US Presidents with Welsh ancestry, including Thomas Jefferson, Abraham Lincoln, John Adams and John Quincy Adams.

Meanwhile, the street plan for the city of Philadelphia in Pennsylvania was based on the town of Caerwys in Flintshire – thanks to a doctor called Thomas Wynne who sailed to America with Quaker William Penn.

Coming the other way is American actor Rob McElhenney, star of hit show It’s Always Sunny in Philadelphia, who is now the co-owner, along with Hollywood A-lister Ryan Reynolds, of Wrexham AFC, the third oldest football club in the world.

Kieren, 30, a business and marketing graduate from Newtown in Powys, said: “Typically, the people who read my blog are those from other parts of the UK looking to plan a trip to Wales or Welsh people visiting other parts of their country.

“However, this last week has seen a surge in readers from the United States with almost 75% of those reading my ‘Is Wales a Country’ article being Americans.

“I wrote the article when I launched the website over summer but suddenly it’s the most read article on my site by a mile as people are finding it through Google search.

“Even since the match against America, traffic is continuing to rise. Even the city of Wales, in Alaska, the most westerly city in the USA, population 152, has had a huge spike in interest this week.”

Kieren, whose mission is to promote Wales as a travel destination, started a backpacking travel blog as a hobby but saw it morph into a full time business in the space of five years after learning about the role of influencers during his employment.

He said his write up reached 581% more readers over the last seven days compared to the previous week as Wales competed in the FIFA World Cup for the first time in 64 years.

He added: “The interest in my article has been such that I’ve had to upgrade my site to accommodate the amount of traffic it’s been getting since the start of the World Cup.

“It’s great that people are taking an interest in Wales and are going to the trouble to find out more about it.

“I really hope the interest lasts beyond the World Cup and people start to recognise Wales as a country with its own identity just like the rest of the UK.”

Kieren pointed out that since the 1-1 draw thanks to Wales captain Gareth Bale, many people from around the world have taken to Twitter admitting they’d never heard of Wales.

@AneedMoorehead wrote: “I’ve never even heard of Wales until today. Is it actually a country?!?! #FIFAWorldCup.

@timelordbetta tweeted: “I’m serious, where is Wales and is it a country? I’ve never heard of it.”

According to Google Trends, there was a huge spike in people searching ‘where is Wales’ and ‘is Wales a country’ during the match earlier this week.

The top five countries from which people searched for the answers were Qatar, Lebanon, the USA, the UAE and Canada.

Such confusion even prompted an article in the Washington Post pointing out that Wales is not in England.

Jim Jones, managing director of North Wales Tourism Ltd said: “It’s not surprising that the World Cup has prompted a huge interest in Wales as well as Kieren’s blog.

“Many people in America and around the world have never heard of Wales so taking part for the first time in 64 years will raise our profile a lot more.

“The interest it will generate in our country will help put us on the map internationally.”

He added: “Players and fans do an awful lot for the promotion of our country – the passion of the people in the crowd shows just how proud we are of our nation – we saw that when the Welsh national anthem was played at the stadium in Qatar.

“We need the team to go out and perform the way we know they can and it will generate interest all over the world, not just in the US.

“The Welsh will stand out a mile with their passion and pride and it will do us the world of good.”

The Wales team will next face Iran on, November 25.

Top 10 links between Wales and America

Five of the signatories of the Declaration of Independence were Welsh or of recent Welsh descent.

On top of that there have been at least eight US Presidents with Welsh ancestry, including Thomas Jefferson, Abraham Lincoln, John Adams and John Quincy Adams.

The street plan for the city of Philadelphia in Pennsylvania was based on the town of Caerwys in Flintshire – thanks to a doctor called Thomas Wynne who sailed to America with Quaker William Penn.

Modern Los Angeles owes a considerable amount to Welshman Griffith J Griffith, who was born near Bettws near Bridgend. After discovering the great parks of Europe he decided that his new home of Los Angeles would need a similar park of its own, so donated 3,000 acres of land to the city to be a public park, which to this day bears his name, Griffith Park.

American newspaper tycoon William Randolph Hearst made a splash in 1925 when he decided he wanted to buy St Donat’s Castle in Llantwit Major; he then restored it in gregarious fashion. Lavish parties there hosted Frank Sinatra, Charlie Chaplin and a young John F. Kennedy. Later, it was sold to Atlantic College, who still use it today.

Yale University is named after the hugely wealthy merchant trader. Elihu Yale, whose surname is a corruption of the Welsh word ‘ial’. His family were named after their ancestral home, Plas y Ian, in Bryneglwys, not far from Wrexham where Yale is buried in the graveyard of St Giles’ Church, one of the Seven Wonders of Wales.

Lord Dafydd Wigley, the former Leader of Plaid Cymru, is a third cousin to the legendary mafia man Llewellyn Morris Humphreys, aka Murray the Hump. According to the law-abiding Lord Wigley, Hump, who took over from Al Capone as the head of ‘the firm’, was a “bad man” who might have turned out differently had it not been for a rough childhood.

Amelia Earhart, the first woman to complete a flight across the Atlantic, landed in Pwll, a small coastal village between Llanelli and Burry Port. Her plane was towed into Burry Port Harbour, and nearby on Stepney Road, where the 2o foot Amelia Earhart Obelisk commemorates the journey.

In 2014, Obama came to Wales for the 2014 NATO summit, and stayed in one the Hunters’ Lodges in the Celtic Manor Resort in Newport where he feasted on Elwy lamb from Denbighshire.

American actor Rob McElhenney, star of hit show It’s Always Sunny in Philadelphia, who is now the co-owner, along with Hollywood A-lister Ryan Reynolds, of Wrexham AFC, the third oldest football club in the world.