A MAN of no fixed abode will stand trial this summer for several breaches of quite an unusual community protection order.

34-year-old Matt Christoper, who also calls himself “King Arthwys The First” was given an order covering a large swathe of land within a five mile radius of the Cleddau, after making claims on land and upsetting local residents.

However the court heard that he allegedly did this and was arrested by police.

The defendant said that at his trial he will bring up an old Welsh law called a Tŷ Un Nos. Old Welsh legend has it if you could build a house overnight on common land, with smoke rising from the chimney by daybreak, it was yours to keep.

The defendant also claims that common land which is unused can be claimed, which he did, referring to the disputed land as his ‘royal residence’ of ‘Kingdom Cymru’ and that he was ‘King Arthwys the First’.

The court will look into if pathways which cross certain land were his, and if he gave permissive rights for people to use them. The defendant claims that it was he who made the pathways safe.

He also believes he owns the gates around the ‘common land’ and that police are denying his Freeman of The Land rights.

The next court date is set for May 30, and Christopher was given conditional bail.

Christopher is facing four charges. The alleged breaches of community protection notice were said to have taken place in Freystrop on January 10, 11, 12 and 14. 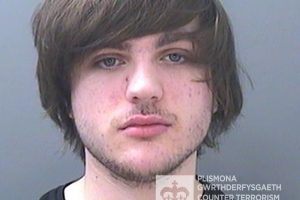