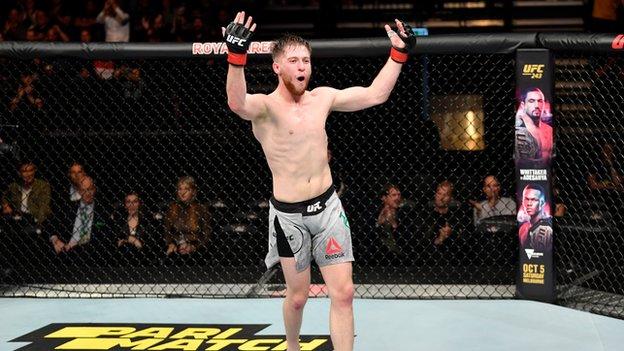 Jack Shore and Cory McKenna will fight in London on March 19th in UFC Fight Night 204.

Shore, born in Abertilly, will face Timur Valiev of Russia – who hasn’t lost a fight since 2016, holding a record of 18-2.

The 26-year-old Welshman competes in the bantamweight division, and is undefeated in 15 professional fights.

His last win came against Liudvik Sholinian in September 2021, where he won by unanimous decision.

He will be looking to extend his prestige record of 15-0 against the #22 ranked UFC bantamweight, who’s last win was against Raoni Barcelos in June 2021.

Before signing with the UFC, Shore was the Cage Warriors bantamweight champion.

Cory McKenna is a welsh fighter currently competing in the UFC straw-weight division.

She faces Elise Reed, who holds a record a 4-1 having lost her last fight in July 2021 via ground & pound.

McKenna herself has a record of 6-1, with a split decision loss in 2018 being her only defeat.

Her last win was back in November 2020 against Kay Hansen via unanimous decision.

“Poppins” fights out of Cwmbran, and is the UK’s youngest ever fighter in the UFC at just 21-years-old.

The bouts will take place in the O2 Arena, London.