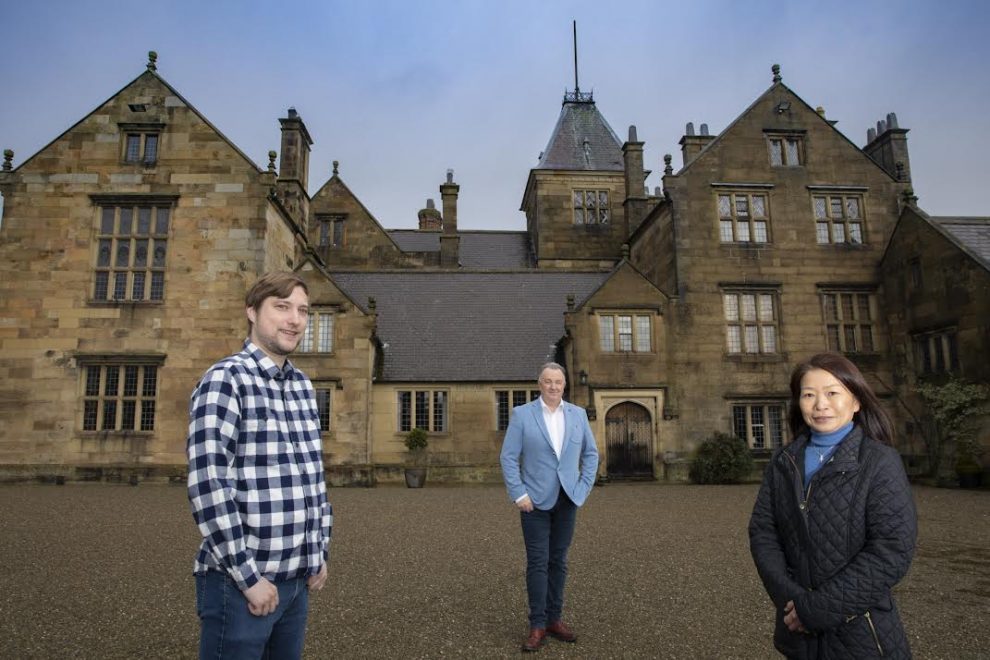 A Japanese-speaking aristocrat is leading a charm offensive to attract tourists from the Land of the Rising Sun to North Wales.

One of the highlights of a bespoke trip for the wealthy Japanese visitors will be a guided tour in their own language by Lord Mostyn of his historic 15th century stately home, Mostyn Hall in Flintshire.

The 6,000-acre estate also includes the seaside resort of Llandudno which also features as part of The Road of Castles in Wonderland tour which was designed by North Wales Tourism specifically with the Japanese market in mind.

Lord Gregory Mostyn, the 7th Baron Mostyn, is already something of a celebrity in Japan.

His family’s close connections with the East Asian country date back to the early 20th century and the fascination of Lady Augusta Mostyn, the daughter in law of the second Baron Mostyn, with all things Japanese.

As she felt she was too old and frail to go herself, Lady Augusta suggested that her son Llewelyn, the third Baron, and his wife and children, should visit Japan and embark on a major tour.

But by the time Gregory Mostyn started dating a Japanese girl while at university this part of the family’s history had been long forgotten.

Coincidentally, however, while the relationship didn’t last, his love affair with Japan grew over the years.

Then in 2015 one of the staff at Mostyn Hall discovered a unique family album of pictures and stories charting the 1908 trip.

It inspired the current Lord Mostyn to recreate the original visit and take new versions of all the pictures taken by his ancestors for his own updated album, even staying at the same hotels a century later.

Since then, he’s appeared several times on Japanese television, including a feature on the popular TVS channel about the incredible story of him following in his ancestors’ footsteps which was watched by 14 million viewers.

It’s part of a major international campaign to attract overseas visitors to the region after the easing of Covid restrictions.

One of the aims of the multilingual drive, funded by the Welsh Government’s tourism arm, Visit Wales, is to ensure that travellers from abroad can enjoy a warm Welsh welcome and information in their own language.

Other countries being targeted include European nations like Germany, Spain and France along with visitors from China and India.

As part of the campaign, North Wales Tourism is going to be building on existing ties with Japan that were forged though the twinning of Conwy and Himeji castles in 2019.

The tour for Japanese visitors will also include the UNESCO World Heritage sites of Pontcysyllte Aqueduct, the Norman castles in Conwy and Caernarfon and the newly-crowned Slate Landscapes of North West Wales.

According to Lord Mostyn, he’s looking forward to welcoming Japanese tourists to Mostyn Hall – along with its Japanese garden – and regaling them with tales in their own language about its enthralling history.

Among the stories that will feature in the guided tour is the narrow escape of Henry Tudor, Earl of Richmond, and one that is commemorated in a giant oil painting at the hall.

King Henry VII was hiding at Mostyn Hall when the soldiers of Richard III came looking for him only for him to escape through the window at the back, enabling him to change the course of history.

The visitors will also have the chance to admire what is believed to be the second oldest continuous collection of family portraits in Wales, second only to the Royal Family, and which goes all the way back to 1617.

Lord Mostyn said:  “I think with the Japanese tourists coming round, it’s pretty unique because it’s one thing to come to a historic house where you’re given a tour by the person who lives there but for them to be conducting the tour in Japanese as well is something else.

“I love Wales and Japan hugely.  It’s just a dream of mine to bring both countries closer together.

“Japan doesn’t have these historic landed estates.  They had aristocracy in the past but in Britain, we’re quite unique because we still have the aristocracy but also the houses, so for someone coming over from Japan is really quite mind-blowing for them.”

“I am delighted that North Wales Tourism have seen the potential to forge these links with Japan, for mutual benefit and to be one of their official ambassadors. It’s a big honour.”

Jim Jones, the chief executive of North Wales Tourism, was hugely grateful to Lord Mostyn for helping to cement the growing links with Japan and also to the Welsh Government for funding this campaign.

He said: “This is a totally unique experience that you cannot get anywhere in the world and I am really excited about rebooting our relationship with Japan.

“I would imagine that the people in Japan, as well as the rest of Asia, are desperate to come over to the UK for a holiday, so we need to capture some of that market.

“We are really looking for wealthy visitors who want to stay over because they spend more money and become totally immersed in the North Wales experience.”

The campaign is also being championed by Emiko Corney, who hails from the Japanese city of Yokohama and now lives in Betws y Coed.

Emiko, who is also a tourism ambassador for North Wales, said: “I feel sure Japanese visitors will come in their droves because they will be enchanted by the region’s history and heritage.

“It’s something I feel passionate about because I want to bring more Japanese people to this beautiful place.

“North Wales has absolutely everything to offer visitors and the connections between Lord Mostyn and Japan are an absolute gift for the tourism industry.”