Madoc: The Welshman who found America 300 years before Columbus 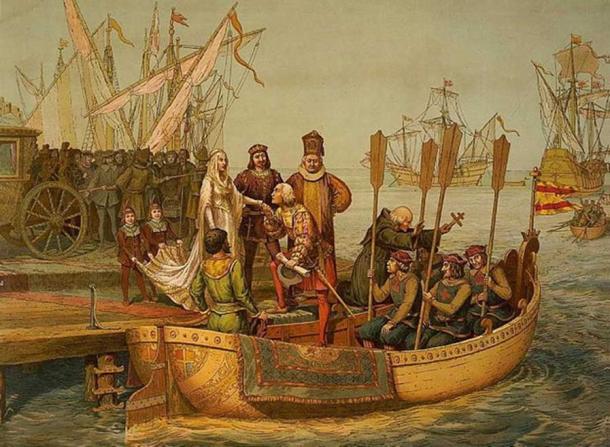 IT’S well known that Christopher Columbus was not the first person to find America, but in some circles he still commonly gets the credit.

However, some people in Wales have a different take on the matter – they will tell you that 300 years earlier a Welshman discovered the continent, and you probably haven’t heard of his name.

The man who is behind this supposed feat was Prince Madoc.

Prince Madoc was the son of Owain Gwynedd, one of the greatest and most important rulers in the country, and while the legend cannot be corroborated there are many who believe it to be true beyond a doubt.

Indeed, Owain Gwynedd certainly existed, his reign being marred by long and hard-fought disputes with Henry II, king of England at the time.

So, how does the tale go?

Way back in 1170 it’s reported that Owain died and, almost immediately, a violent and very bloody dispute arose between his 13 children regarding the succession.

Madoc and his brother Rhirid were so upset and angered by events that they decided they wanted no further part in what was happening. Indeed, they wanted nothing more to do with their family or their homeland. They duly took ship from Rhos on Sea (Llandrillo) and sailed westwards to see what they could find.

What Prince Madoc found, so the legend says, was America.

The first voyage of Madoc, it is said, took eight weeks after which he landed in the bay of Mobile, probably during the summer of 1170.

The old tale tells us that Madoc left some 120 people to establish a base camp in the very beautiful and fertile Mobile Bay. He then returned to Wales to recruit more people for his expedition. The original 120 people were lost without trace. This was just the beginning of one of the most romantic and mysterious adventures of mediaeval times.

The Gwenan Gorn and the San Pedr probably landed in Mobile Bay during the summer of 1170. The Prince Madoc was impressed with, to quote Zella Armstrong, “the present and fruitful land, the inhabitants delighted him and were apparently pleased with the visitors.”

This, as we shall see, would change.

The ancient tale has it that Madoc having found such a paradise decided that he would return to Wales and recruit more individuals to settle the new land which he had found. It is said that on his first return to Wales, Madoc regaled his brother King David and his wife Queen Emma (who was half sister to King Henry II of England) with tales of the exotic lands far to the West.

This is described in the Robert Southey epic poem “Madoc” written hundreds of years later.

Migrants who would have chosen to accompany Madoc into the unknown would have had a compulsive urge to make such a voyage. Their motives whether they were religious, political, the lure of wealth or the wish for adventure are not explained.

The charisma which Madoc exercised must have been exceptional in persuading them to subscribe physically or financially to such a highly dangerous venture.

One of the primary purposes would have been to escape the discontent and chaos which prevailed in the unsettled state of the medieval small kingdoms of Wales. Four of Gwynedds sons who would have been siblings of Madoc and his sister Georil were said to have chosen to sail into the unknown on his second voyage, further illustrating the confusion of their Welsh status.

During the second expedition, Madoc must have assembled people with many skills to sustain the community which he hoped to settle in the Americas. It was impossible to foretell the wild and exciting journey which lay before them.

The Viking style ships left Wales, loaded with supplies, princes, priests and paupers all of whom wanted to live in peace in the magical land which Madoc had told them about.

On arrival initial contact with the Native Americans, from the sparse information provided, seems to have been friendly. This is illustrated from an incident related hundreds of years later.

During the year of 1942 two teenage boys visited to town of Gadsden, Alabama and made the acquaintance of a rather talkative old man by the name of Chief Tappawingow of the Muskogee Nation.

The old man repeated to them a legend handed down for generations that white men sailed the Coosa river (which joins the Alabama river) trading in fur, metals and wood. Although no physical proof currently exists for this story it is one of the many rumours which have circulated about the Welsh migrations amongst the Indian tribes.

The chief mentioned that trading would have been of advantage to both communities.

The ancient legends state that Madoc had left after his first voyage some 120 people to form a base camp.

Having reached for the second time the long coastline with many similar inlets and bays, it was impossible for him to recognise the place which he had left months earlier.

Searching for the abandoned party he sailed further West and then turned the search inland for his comrades. This proved fruitless. Madoc could find no trace of them. They were never heard of again.

Time passed and the adventurers became curious and moved up the Alabama river, where so legend tells us, he stopped at the Desoto Falls on the Coosa River where seemingly, the first of the fortified settlements were established.

Here begins the mystery of the Stone Forts of Alabama, Tennessee and Georgia. Historians and archaeologists have long speculated about their purpose and who built the fortifications.

Researchers have found for example, that the fortification at the Desoto Falls was identical in plan to Dolwyddelan Castle, which was the birthplace of Madoc.

Many scholars who have investigated the stone forts believe that the Native Americans could not have built these strange constructions as they did not have the technology.

The adventurers moved on and appear to have constructed a number of these forts which seem to encircle land they wished to settle.

There are a few other settlements mentioned in old records and tales, of which none have survived. The general opinion of archaeologists and other scholars are that the forts were of prehistoric origin, which in American terms seems to mean pre Columbian, although the builders have never been formally identified.

For a time the adventurers settled in the area of Chattanooga but bad luck seems to have again dogged them. They were routed by the Cherokee and were forced to leave the area, despite their huge efforts to protect themselves and the area of land which they wished to settle.

The next part of the venture is another mystery, only supported by myth and legend, but reflects the tenacity of the Welsh migrants who wandered the land for many years seeking a home.

The vexing question is – Did the Welsh Expedition leave the ancient fortified remains surrounding the Chattanooga area? What little archaeological work has been carried out on the ruins suggests that construction could only have been sustained by a people with a knowledge similar to the military architecture prevalent in Europe in the 1100s.

There has been no conclusion drawn as to who these people were, only the stories handed down for generations by the Native Americans who said a white moon-eyed people built the forts.

The Welsh adventurers who only wished to live in peace seem to have been driven from place to place by the natives who maybe viewed them as a threat.

It is also a possibility that these strangers had inhabited hunting grounds of the Native Americans, or had, with no knowledge of Native American tradition, accidentally desecrated grounds which were sacred to the Indians. All the theories need substantial investigation to prove or disprove the story of the Welsh migration to North America.

What is fact, however, is that there were ancient stone fortifications and it has been generally recognised that these were built before the Native Americans moved to the area. This is where myth and the only factual evidence for its proof converge.

John Dee, one of the principal mystics of the last five or six hundred years, laid claim to the Americas when in the name of Elizabeth I he addressed the English Council at Court. He started his speech: “The Lord Madoc, son of Owain Gwynedd, Prince of North Wales lead a colony and inhabited Terra Florida or thereabouts.”

There is much documentation surviving on this claim, but no actual proof that this adventure ever took place. All that survives is tradition. Some of these stories surfaced in the medieval courts of Europe during the 1200s and have survived to this day. For whatever reason, Queen Elizabeth I never pursued this territorial claim with any enthusiasm, despite the fact that the old enemy, the Spanish, were making inroads into the Americas and claiming extensive lands.

The legend persisted in the Americas of the Welsh speaking Native Americans, and there are several documented examples. John Evans a Welshman employed by the Spanish during the 1790s to investigate this claim, denied the existence of Welsh speaking Indians.

It is strongly hinted that politics could have been the reason for the denial.

So where the truth lies, nobody really knows, but there’s a very strong chance there are deep Welsh routes in the good old US of A.