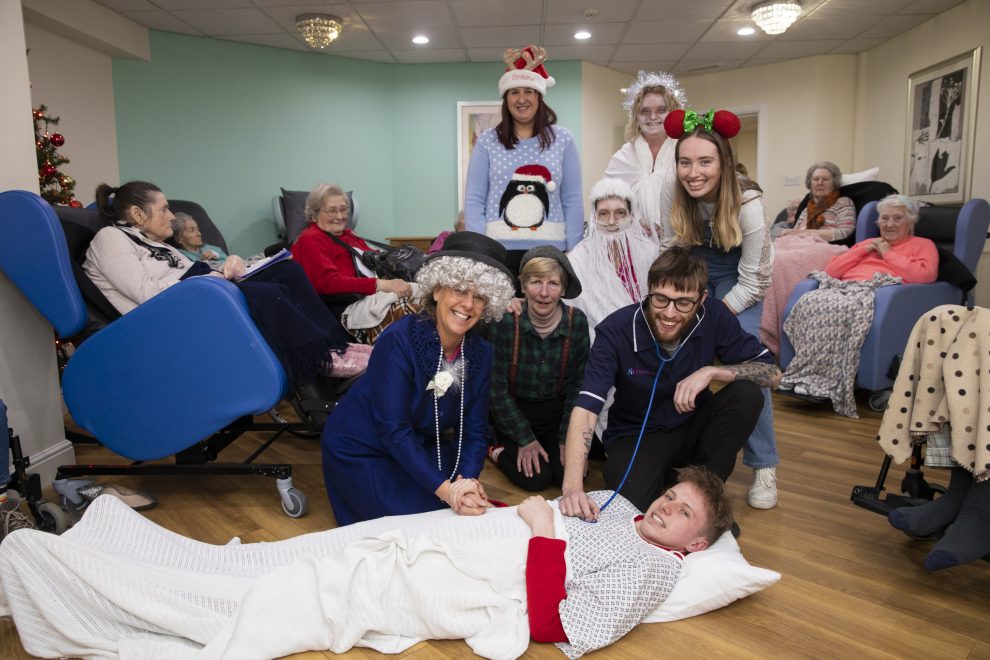 HOLLYWOOD superstar Ryan Reynolds would have been blown away by the acting talent when care home staff wrote and produced a festive pantomime – oh yes he would!

Senior care practitioners Sophie Smith and Laura Shone who work at Pendine Park’s Highfield care home in Wrexham penned a script full of Reynolds-style fun quips and local references, all loosely based on the Charles Dickens classic, A Christmas Carol.

Sophie played a modern day Scrooge, haunted by the ghosts of Christmas past, present and future.

She said: “It was an absolute blast. We loved doing it. It’s so good to get some old fashioned fun back into Christmas after the hardships of the last couple of years.”

She laughed: “Who knows, now he’s taken over Wrexham FC, maybe we can get movie star Ryan Reynolds to star in our next production!

“Our residents would just love that.”

Laura added: “I think he would have been more than impressed with our comic timing and acting prowess.”

She took on the narrating role for the pantomime which kicked off the annual Christmas party afternoon at Highfield.

The eight strong-cast certainly elicited some broad beaming smiles and whoops of delight from Highfield residents.

They got a bumper size thumbs-up for their performances even though they had to deal with a few unexpected hiccups just before curtain-up.

Highfield manager Tracey Smith and her deputy Terri Broderick praised the group for sticking to the traditional theatre motto “the show must go on” even when two cast members had to drop out at the eleventh hour.

Tracey said: “They had to pull out at the last minute but the whole troop were brilliant and carried on regardless. They drafted in a new recruit, Vicky, to take over one of the parts while another cast member, Chris Lewis, doubled up and played two roles.”

Pendine enrichment activities co-ordinator Chris said: “It was just one of those things. I was allergic to one role so I thought well why not take on the other smaller part as well. Fortunately it was just a few extra lines and I was able to take it on board.

“The main thing is we put on a good show and there were lots of laughs which is so nice to see, given the difficult times everyone endured during Covid lockdowns.

“We haven’t had much chance to put on a family-style panto like this for a couple of years so it’s brilliant to have the normality of those good times back again and create some new and happy memories for staff and residents alike.”

Sophie and Laura wrote the script between them, taking a whole day to inject some typical Wrexham humour into the classic Dickens tale plus some quick-witted one-liners of they type which Ryan Reynolds is known for in his blockbuster movies.

The panto followed the famous story of a curmudgeonly character who doesn’t like Christmas but is introduced to the joys of the season by a trio of wise spirits.

All the costumes were made by the staff, some last minute and made using an array of cardboard, sticky tape and crafts kits from the popular Pendine arts club.

Laura said: “We put our heads together and came up with some quirky ideas. We took our inspiration from the famous Dickens story but added some Wrexham references which we knew our residents would be familiar with. Plus there were a few festive jokes and plot twists thrown in too, which everyone enjoyed.”

The cast consisted of eight volunteers who rehearsed in their own time and in break times at work whenever they had a spare moment.

Manager Tracey said: “They were brilliant really. They only came up with the idea about four weeks ago. They came to me completely off their own bat to ask if they could do it, and when I said yes they got stuck in and put it all together in about two weeks.

“They showed me the script beforehand but it wasn’t until the day of the performance that I saw the show in its entirety.

“The residents were so excited and the show was really lively and entertaining. They did a fantastic job. Full marks to the whole lot of them.”

In addition to Sophie, Laura and Chris, the other cast members were Sharon Williams, Ann Evans, Vicky Williams, Callum Davies and Dean Hughes.

Tracey said the pantomime was just one of a number of amusing events which staff have organised to bring some festive cheer to residents in the run up to Christmas.

Highfield’s popular Christmas party was held on the same day as the panto, while other fun dates on the calendar have included a Carols by Candlelight concert, a Christmas chocolate tasting day, a church service, and a party to celebrate New Year.