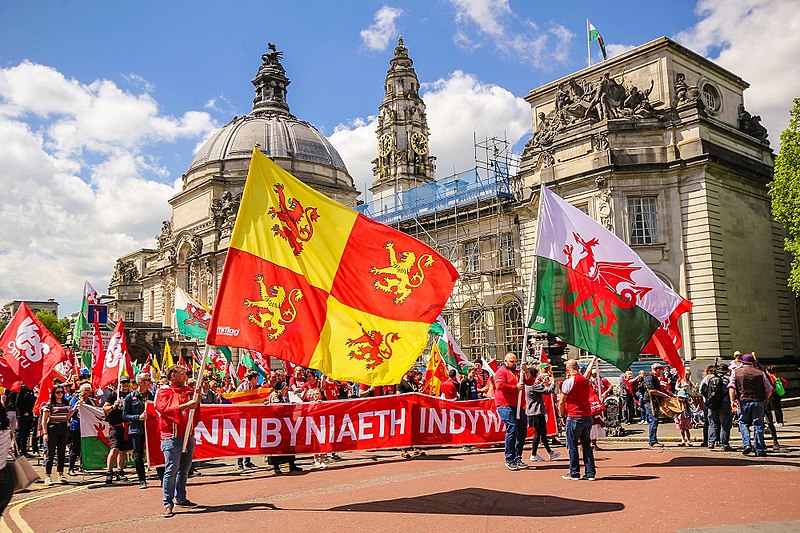 THEY gathered wearing red, green and white, with banners of Glyndŵr and Y Ddraig Goch
hovering above their heads, with cries of Calon Lân, Yma o hyd, mixed with the anthem. The
marchers for Welsh independence descended into the city of Cardiff.

The long anticipated rally had been planned months in advance, with the organizers hoping
for a crowd of 500 to turn up on marching day on May 11th, 2019. It was to their disbelief
when 3,000 people landed in Cardiff, filling the Capital and packing the streets.

The supporters gathered by the statue of John Batchelor, where a stage had been built for
the speakers of the event, which included Plaid Cymru leader Adam Price, and Ben
Gwalchmai, Chairman of Labour for an Independent Wales.
The rally at Cardiff was followed by a rally in Caernarfon which saw a crowd of 8,000 to

10,000 people flooding the town, and Merthyr Tydfil, which attracted around 5,000 people.
Due to Covid-19, the rallies in Wrexham, Swansea and Tredegar were cancelled, and
rearranged for the summer of 2021.

The percentage of people in Wales supporting independence was low as 4% as late as 2014. It has now risen to between 30% – 33% in polls conducted in recent months. The independence campaign group, Yes Cymru, saw a jump in their membership numbers between March and November of last year, from 2,000 members up to 17,000 in just 6 months.

Debates surrounding Brexit, the Covid-19 pandemic, and the defacing of the Cofiwch
Dryweryn mural, are factors that had an effect on people’s opions on independence
While the number of people supporting Welsh independence has been growing, there has
also been a sharp increase in the percentage of people who want to abolish devolution
completely. This increase has become even more evident during COVID-19 pandemic.

Plaid Cymru has been the strongest advocate in favour of independence, while the Tories
and Abolish the Welsh Assembly have been the most opposed towards the idea. The Liberal Democrats and Labour are pro-union and pro-federalisation, but their supporters, even
some of their Senedd members, are showing a greater interest towards Welsh independence.

As the debate progresses, polls have indicated that people are becoming more polarized to
either side of the argument. A similar situation is developing with the independence debate,
as did happen with Scotland back in 2014. We will see the middle ground being shifted to
either camp as the debating gets underway.

These are the topics that people often look to discuss when debating independence, they
are the core arguments usually of proponents or opponents of independence.

A report published by the Welsh Government has shown that Wales’ nominal GDP is at
£74.9 billion. This would make Wales, if it was an independent country, the 25th richest
country in Europe, between Slovakia, and Luxemburg. Above countries such as Croatia,
Iceland and Lithuania. The GDP per capita £23,866 and Wales exports £17.7bilion per year
worth of products.

A figure that is used frequently by those who support and are against independence is the
deficit that Wales has of £13.6 billion per year. People who support the Union use this figure
to prove that Wales cannot sustain itself, and needs Westminster assistance to keep the
country afloat, Pro independence supporters use this figure to show how being in the Union
is affecting Wales financially, and that the country needs independence to change the
economic and financial structures within Wales.

A frequent question asked about the economy is will Wales be a part of the EU in the future, or decide to be part of the EEA, and how would that affect its economic prospects.

Economists across the divide clash on this topic frequently, but it’s obvious further research
needs to be carried out to forecast the future of our economy as an independent country.

The commission for justice in Wales, which was published in 2019, recommended that the legal
jurisdiction be devolved to Wales, as well as powers regarding policing and justice. Wales
could achieve this while being a part of the UK or as part of the independence process.

Wales has a vibrant and rich culture on its own, and it also has connections to the culture in
the UK, especially regarding historic events. The question of identity is looked at often, and
is a hot topic in debates. Pro independence supporters discuss matters such as the Welsh
language, and believe that the language would fare better in an independent Wales, while
pro union supporters believe that the language and culture is part of what makes being
British unique, and that the UK is a family of nations working together.

Could Wales Make It?

Many questions still remain. The economic and legal structure that Wales will adopt, the
treatise and deals it will sign, and even the timescale and method that Wales will take to
achieve independence is still up for debate. But with the data available, we can picture the
scenarios if Wales becomes independent, or decides to stay in the Union. Wales could have
a future in either one of them, but whichever future that will be, will be up for debate over the next few years.

In May this year, we have an election to choose the party that we want to run the Senedd,
and this will give us a clear indication on the country’s ambition for the next 5 years, and will
make it clear if Wales will take the path towards independence, or stay put for the time
being.

Welcome to Herald.Wales - The independent voice for our nation