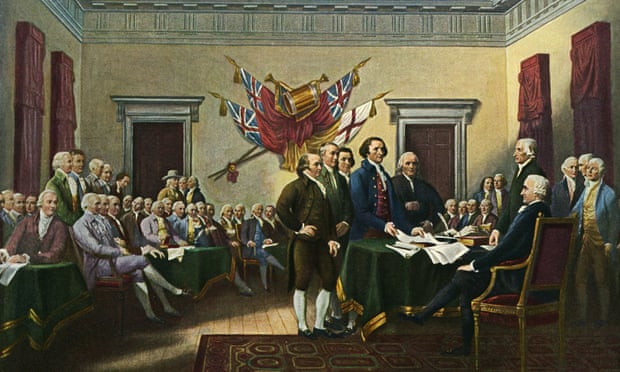 FOR such a historic moment in world history, the signing of the Declaration of Independence in the US involved a lot of Welshman.

Sixteen of the 56 signatories were of Welsh descent, to be precise. This included the Llandaff-born Francis Lewis, who moved to America at 21, signing the constitution on behalf of New York.

The Welsh were among the very first settlers to go to America, so it’s fitting that we played such a big role in this historic moment.

Two history books claim that a Welsh Prince, Madoc, landed in America around 1170, 320 years before a certain Christopher Columbus. He returned to Wales, legend goes, to take more settlers with him. This myth was used by Elizabeth I to assert Britain’s rights to America over Spain in the late 1500s.

Another strand to the legend suggests his settlers eventually met the Mandan, a Native American tribe, who learned to speak Welsh. A 26-year-old explorer from Caernarfon, John Evans, voyaged to America to find them in the 1790s, but found no evidence of Welsh-speaking when he got there.

In 1681, King Charles II gave 45,000 square miles of America to Quaker William Penn, who wished to call it New Wales (Charles II insisted on it being called Pennsylvania).

Many Welsh Quakers who only spoke the Welsh language had recently moved there, fleeing religious persecution back home.

More immigration in the 18th century brought the Welsh to a West Pennsylvania area now known as Cambria County. Delaware and the Carolinas also have Welsh roots, and a party of Jackson County, Ohio, is called Little Wales.

The Welsh language was spoken here widely until the 20th century. It still persists too: according to the 2010 American census, 135 people still speak Welsh.

Eluned Morgan MS said during a trip to America: “Wales has long historical, cultural and business ties with the USA and Welsh-Americans have made an important contribution to life in the USA – and continue to do so.

“It’s no exaggeration to say the Welsh helped build the foundations of a nation that has become the modern day USA. The Welsh were among the very first settlers to go to America. The second wave of Welsh immigration took place in the mid-1800s, and this continued throughout the Industrial Revolution, when Welsh immigrants brought new skills to the American coal, steel and slate industries. Welsh steelworkers even built the steel roof structure of the White House!

“Abraham Lincoln, himself of Welsh descent, in his Gettysburg Address in November 1863, reminded those present why the founding fathers established America 87 years earlier. But he very much underestimated the significance of his address, believing his words would not be remembered.”

One of the memorial stones on the Washington Monument is inscribed with “Fy iaith, fy ngwlad, fy nghenedl, Wales – Cymru am byth” – My language, my land, my nation, Wales – Wales forever.

Today, the US is one of Wales’ biggest trading partners, with some statistics from the Welsh Government revealing:

The USA is the largest source of inwards investment into Wales, in terms of the number of inward investment projects

The USA is Wales’ largest export market outside Europe – equating to 14.7% of exports, worth £2.44 billion

So, the next time you are in a conversation about the Declaration of Independence, make sure you bring up those 16 men of Welsh descent, and the importance the Welsh played in America’s history, up until this very day.

Nick Ramsay to stand as Independent in Monmouth