Home » Armed raider who carried out two robberies is jailed 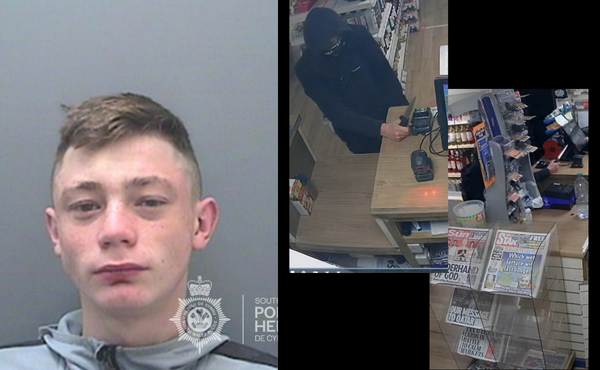 BRANDON JENKINS, 18, has been handed a four-year and four-month sentence after targeting Owen Stores, Trefechan and Sammy’s Fish Bar in Cefn Coed, within 24 hours of each other on October 13 and 14.

Armed with a knife and wearing a scarf to try and conceal his identity, Jenkins left the shop worker terrified as he stole £700 from Owen Stores. The evening before that, he entered Sammy’s Fish Bar with an iron bar and approached the counter, but left after he was confronted by a member of staff.

An investigation was launched to identify the offender, and later that day (14th) Jenkins was found and subsequently arrested.

Jenkins, of no fixed abode, was later charged and pleaded guilty to one count of robbery, one count of attempted robbery and possessing an offensive weapon when he appeared at Merthyr Tydfil Crown Court on October 15.

On Tuesday, October 29, he was back at the same court as a judge sentenced him to four years and four months behind bars.

Detective Inspector Matt Hicks said: “There is absolutely no place for this kind of behaviour in our community and Brandon Jenkins should be ashamed by his actions.

“He showed a total disregard for the law and the welfare of others as he walked into two businesses armed with a knife and iron bar and threatened staff for purely selfish gains.

“Thankfully, nobody was injured in either incident and Jenkins left empty-handed, but his frightening behaviour could have caused long-term effects for his victims.

“I am pleased that the severity of his crimes have been reflected in this sentence and hope he uses this time behind bars to think carefully about the consequences of his actions.”

Parents urged to familiarise themselves with the symptoms of Strep A and scarlet fever
Warren Gatland returns to coach Wales!