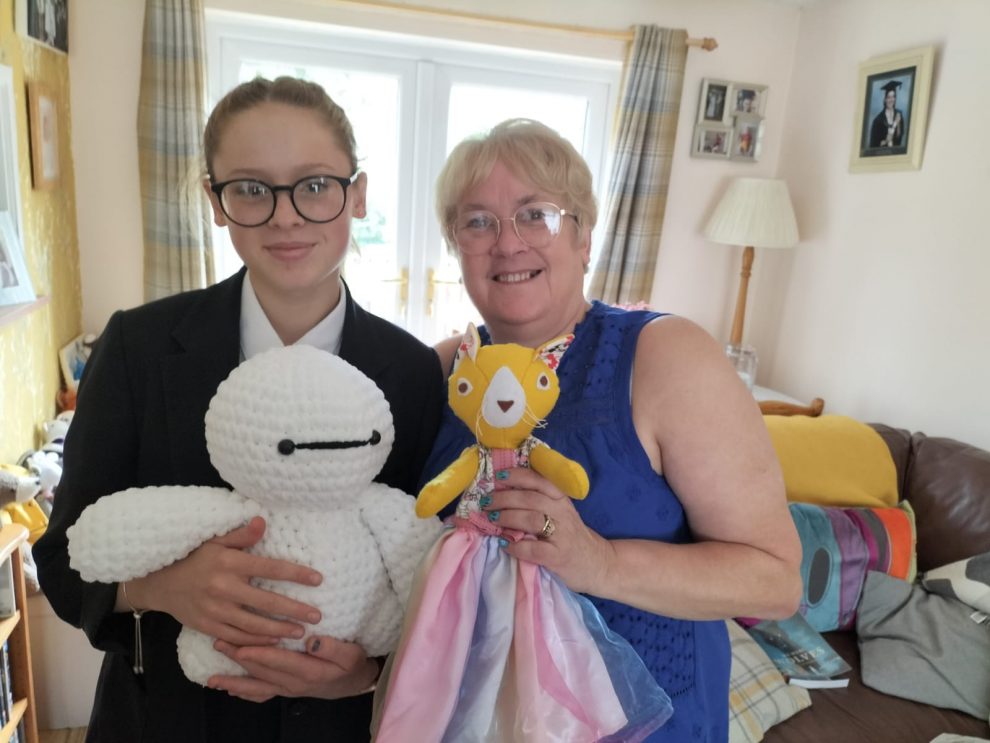 A TEENAGER is making adorable toy animals with her Nan to raise money for Parkinson’s UK Cymru.

Isabel Pritchard, 15, from Torfaen, started creating the crochet critters after she found out her Bampi, (grandad) Paul, was diagnosed with Parkisnon’s.

The Croesyceiliog School pupil, who has raised for the charity £265 so far, has been making the animals to order and posting pictures of them on her Instagram account.

Her proud Nan, Julie Pritchard, 63, who works on the checkout at Sainsbury’s has been going to the Parkinson’s UK local group in Torfaen, which she says has been a source of information, practical and emotional support. The money raised from the toys is going directly to the local group.

Isabel said: “When I found out that my Bampi had Parkinson’s I thought that it would be really nice for me to raise money for something like that. It’s personal and it’s a horrible disease for people to live with and I wouldn’t wish something like this upon anybody.

“It was something that I had my mind set on, and I plan to keep on going whether it be just Parkinson’s or multiple other charities. I plan to carry on because it’s something that money should be raised for. We need to raise as much money and awareness for the charity as we possibly can.

“My Bampi struggles with his walking, putting his heel down first, so he’s got a limp. It affects his balance.

“He gets really stressed in certain circumstances like with loud noises and high-pitched noises, so we can’t have all the kids around in the house.

“We can’t have all of us together at one time in an enclosed space. He gets very tired very quickly. It has a big effect on all of us.”

She added:  “My Nan taught me to crochet in October and then I told her I wanted to make some stuff for Parkinson’s.

“We started making animals and then I created an Instagram page. Then we let friends and family know. People just said what they wanted us to make, and gave us money. We kept the money in a little jar.

“My Nan gave the money to the local Parkinson’s UK group she goes to.

“I made a wolf for the lady who does my Nan’s nails in the salon. I made a sloth, I made two rabbits, I made a dragon, which has gone to Australia, and then I made two penguins, and an elephant.

“I also made Baymax from the Disney film Big Hero 6, which looks like a big marshmallow.

“Then my Nan made a bear, two rabbits, two cats, a sheep, a mouse, an elephant, and a giraffe.

“Altogether it would take me a day or two to make one. It depends on how much time I had and how big they were.

“I love crochet. It’s really good. It’s just something to take my mind off different things like exams and stuff. I usually do it when I want to take time off studying for exams. It’s very therapeutic and it’s a hobby that gets me doing different things.

“Well I was thinking about doing something for a charity before I was told about my Bampi having Parkinson’s. I wasn’t sure which one to do it for.

Julie said:  “It’s been a godsend through lockdown since Paul was diagnosed. It’s helped me a lot to do my sowing animals. It’s been quite therapeutic.

“We had nobody because we were with a surgery, but we had to swap in a different area, and we had no contact with anybody about it once Paul was diagnosed. So we were sort of on our own.

“We have to say there was a nice lady in Shaw’s, and she asked why we were buying so much wool, and we told her why, and she paid for the wool for us. So we made her a penguin to say thank you for the donation.

“I’m very proud of what Isabel is doing to raise money for Parkinson’s UK Cymru. When you think, you hear so many bad stories about 15-year-olds. She’s a 15-year-old doing wonderful things and I am very proud of her.

“We do get the Parkinson’s UK magazine and he does find them very useful, and the information in them.

“We’re getting help with finding out whether Paul is entitled to any sort of benefits. Paul has worked at his firm now for 48 years. He did his apprenticeship there.

“I do find the group very helpful because it provides emotional support as well as useful information. And you can have a laugh up there as well. You can laugh about things.

“Things will happen and instead of getting worked up, we’ll have a laugh about things.

Isabel added: “It’s a really supportive group as well. They’re supportive of all of us. It’s lovely. They don’t turn Parkinson’s into a hindrance. They help you realise that you’re not alone. If Nan ever needs help with anything she can always call up the volunteers there, and the people who go there are really lovely as well.”