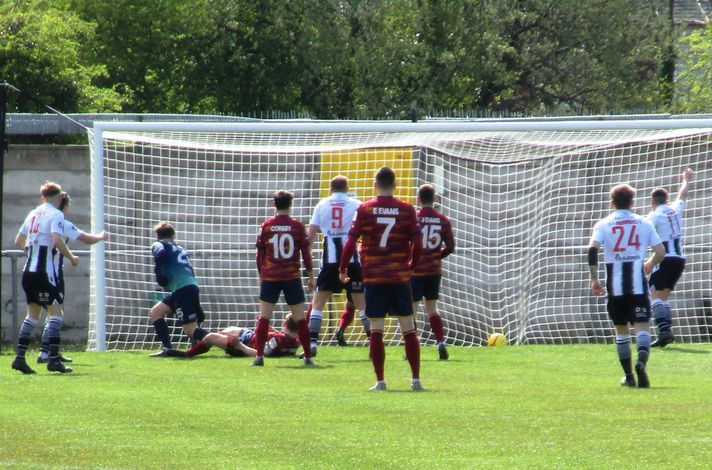 FLINT TOWN UNITED moved out of the bottom two of the JD Cymru Premier on Saturday, April 10, as they beat Cardiff Met 2-0.

The result sees them go above their opponents with the Met slipping into the bottom two as a consequence.

It was Flint who created the first real opportunity of the match in the 12th minute; when a looped pass in behind from Conor Harwood was latched onto by Josh Amis, who held it up brilliantly before showing great awareness and composure to tee-up Callum Bratley whose finish cut agonisingly wide of the post.

Whilst chances were limited, action was aplenty in the first half, with the Silkmen picking up five yellow cards in what was shaping into a feisty affair.

With both sides struggling to play their passing games and adapt to the harder ground conditions, the game needed a spark of quality to light the fuse of this eagerly awaited encounter.

That is exactly what happened in the 38th minute, after a Beckham-esque free-kick from Ben Maher was placed with pin-point accuracy onto the head of Ben Nash at the back post, who expertly steered the header across the goal into the far corner believing he had given Flint the lead only for it to be ruled out for offside.

However, the fire had been lit, and no more than a minute later after some great play down the left flank by Eddie Clarke, Conor Harwood was found with the ball at his feet in the box 10 yards out, before delivering a poacher’s finish past the keeper.

This was the advantage Flint had been seeking as they headed into half-time, and it is one they managed to hold onto thanks to Jon Rushton’s smart save to deny a Cardiff Met volley from the edge of the box in the 42nd minute.

The second half began in very much the same fashion as the first half, with a scrappy opening 20 minutes and more bookings for Flint players.

Cardiff Met had more of the possession although lacked the required creativity in the final third to pose any threat to Rushton in the Flint goal. The only real chances for the away side in the second half were from a multitude of corners which were wasted.

In the 72nd minute, the game was put to bed with Flint’s first foray forward, after Sam Hart delivered a corner into a dangerous area and when the ball was headed down to Callum Bratley, he made no mistake in slamming home Flint’s second goal of the match, a setback from which the Cardiff Met team was visibly dejected by.

Just a few minutes after seemingly putting the game beyond reach of the visitors, Flint had captain Alex Jones sent off for a second yellow card after something he had apparently said to the referee.

Despite this, the Silkmen stayed defensively resolute throughout and stuck out the last 15 minutes out very well.