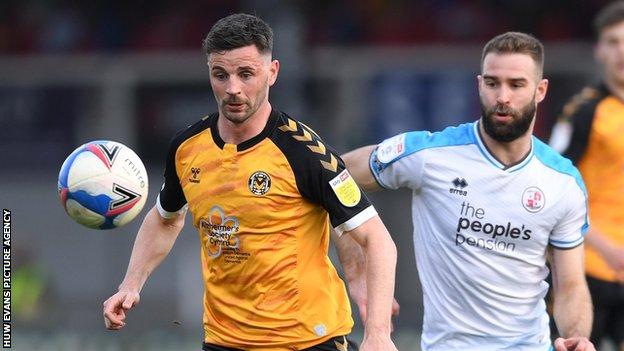 Newport County AFC travel to Crawley Town’s Broadfield Stadium for a 7:45pm kickoff tonight in the EFL Football League Two. Newport Currently sit 8th place in the division with 26 points on the board, whereas Crawley Town find themselves down at 18th with 20 points – just two wins behind The Exiles.

A win for Newport could push them joint fourth, although that would require the teams at the top to drop points in their games – specifically Northampton, Leyton Orient and Harrogate.

Newport go into this game after a last minute loss to Swindon Town on Saturday which ended their 7 game unbeaten run in the league, where the Robins scored in the 88th minute to end the game 2-1 – a disappointing defeat to the Exiles where Finn Azaz unfortunately scored an own goal.

Crawley Town on the other hand won their last game against Barrow on Saturday to end their run of four losses on the bounce, and will be looking to get under Newport’s skin to start climbing the table.

Newport have won four of the last 12 meetings against Crawley, with the Reds not getting a result against Newport since 2018.

The last time these two sides met, Newport stormed to a 2-0 victory where Liam Shephard and Aaron Lewis bagged the goals, with Crawley picking up an 89th minute red card. Crawley haven’t been able to beat Newport County since 2018, losing 1 and drawing 3 of their last 4 meetings.

Striker Dominic Telford is the current top goal scorer in the league with 11 goals – and will be keen to extend his record against the team that have conceded 25 this season. He has averaged just 70 minutes per goal this season, having only played 10 games.

Crawley Town’s Kewsi Appiah has 6 goals himself so far in 14 games, and with a steep 21 goals conceded so far for Newport – there is every chance he can net a few himself.

Sam Allison has been appointed for this matchup against Crawley Town.

I’d like to think Newport can win this with relative ease – mainly thanks to Telford up front. He’s been too clinical so far on the games he played and should he get a start, I think the goals will come. Crawley have only scored 18 so far this season – amongst the lowest in the league. That being said, it is League Two football and the goals are bound to come from either side no matter what. I’m going with 3-1 Newport County AFC.