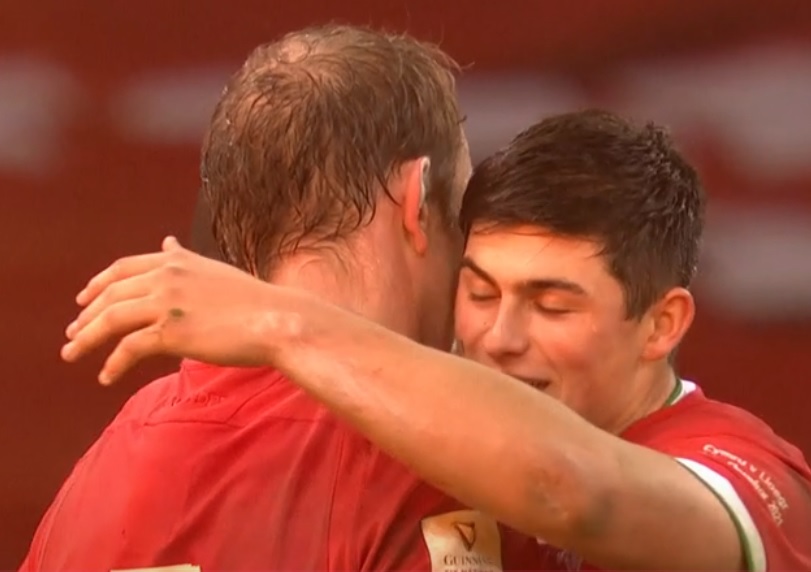 WALES rode their luck while English indiscipline cost them dearly in a controversial and exciting contest in Cardiff.

While the Welsh pack continued their improvement, England’s vaunted front eight were found wanting at the breakdown and no better than level in the tight.

Wales’ first try came from a moment of opportunism. After England infringed at the breakdown, referee Pascal Gauzere told skipper Owen Farrell to have a word with his players. With England mostly gathered in midfield, Dan Biggar asked the official how much time was left for the conflab. The referee told him ten seconds. At the ten-second mark, with England unprepared, the ref blew his whistle for time on and the Welsh out-half chipped the ball to the corner, where Josh Adams caught and grounded the ball.

If England were outraged by that decision, the next Welsh try rubbed their noses in it.

17-6 down, England came roaring out of the blocks from the restart.

England went to the corner, when Farrell spurned a kickable penalty. The visitors laid siege to the Welsh line. After patient play through the phases, England spun the ball wide and Watson touched down in the corner.

England were caught napping by Wales’ third try. After conceding a needless penalty near the posts, England trooped towards their own line expecting a kick at goal. Kieron Hardy caught them napping with a quick tap  penalty and showing speed of foot as well as speed of thought, burst over the line to score.

A Farrell penalty brought England to within a score.

England then drove the ball up-field and again camped near the Welsh try line. Pressure counted as Youngs burrowed over to score a deserved try while Farrell’ conversion levelled things up at 24 a-piece with about fifteen minutes left.

What happened next would have made any coach tear out his hair. Which is, perhaps to Eddie Jones’ great fortune.

English indiscipline cost them nine points in penalties – with one conceded by replacement scrum-half Robson being for a particularly stupid and blindingly obvious obstruction.

With Wales more than a score ahead, England desperately upped the pace. But a further penalty saw kick for touch, win the lineout and work the ball to midfield. Replacement lock Cory Hill gathered the ball from a breakdown in front of the posts and powered over for a try, converted by Callum Sheedy.

At the whistle it was 40-24 and England’s players looked like they’d been mugged on the way home after an ill-advised kebab.

Former England international prop David ‘Flats’ Flatman commented: “Based on this evidence, World Rugby should consider substituting refs, not just players. The first half was an oval-shaped omnishambles.

“If Louis Rees-Zammit didn’t knock that on, then the game I’ve been watching for 40 years isn’t rugby. Equally, Josh Adam’s’ try was exceptionally well taken, but should never have been allowed.

“England weren’t undone by Wales. They were undone by some astonishingly poor refereeing and by their own equally astonishing inability to stop doing daft, unforced, illegal things.

“Considering how unthreatening Wales were with the ball for most of the game, England’s penalty count becomes even more astonishing. It reminded me of Tyson Fury punching himself in the face.

“England actually looked the sharper side with ball in hand, but since when has that mattered? When Wales had chances to score, they took them, even if some of them were gift-wrapped by a bloke from France.

“At school, one of the first lessons you’re taught in rugby is never turn your back on the opposition. With that in mind, my old PE teacher will have been hoarse from screaming at the TV when England switched off for Kieran Hardy’s try.

“If anyone picks a Lions XV that doesn’t have Tom Curry in it, they need help. The bloke’s on another level.

“Stuart Hogg and Liam Williams absolutely have to start for the Lions. There’s one slot up for grabs in that Lions back three, and a lot of phenomenal options to choose from.”