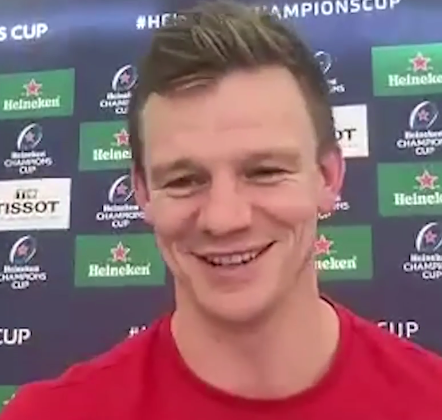 SCARLETS will play their first fixture in the European Champions Cup this weekend as they travel to France to take on Bordeaux-Begles.

The Llanelli-based region had been due to play Bristol Bears in their opening fixtures at the beginning of December but that match was cancelled as Scarlets were unable to play the game.

That was because the squad had been placed in quarantine following their arrival back into the UK from South Africa where the Omicron variant of Covid-19 had become prevalent.

Their second match in the competition, their home game with Bordeaux, was also called off and has now been declared as a 0-0 draw.

Now it seems that their third game of the competition will be the first one to be played and the Scarlets are eager to get back on the field to finally kick off their European campaign.

Their 22-19 win over the Ospreys on New Years’ Day gave them a big boost in confidence and coach Dwayne Peel is hoping they can push on and replicate Leicester’s win over the French side earlier in the competition.

Speaking to Herald Wales, Dwayne said: “It’s a fantastic competition to be a part of, we’re very much looking forward to getting into the swing of it. We’ve had the two games cancelled in round 1 and 2 so to get back and play in the game will be huge for us so we’re looking forward to it.

“Obviously (the win against the Ospreys) a great win for us, it was a patchy game, the first half especially was a bit to and fro but when we settled down I thought there were periods of the game where we were good.

“There’s things to work on but the nature of getting back into battle and actually playing a game was huge for us and we’ve managed to get on the right side of the result.”

They will face a tough test against Bordeaux though as they currently sit top of the Top 14 table with with 11 wins and 1 draw from their 14 games played so far.

Their most recent success also saw them come away with a 22-19 victory over Brive and Dwayne said it will be a tough task but one they are looking forward to.

Asked about the opposition, Dwayne said: “Yeah we’ve seen plenty of them, they are the league leaders of France, stacked full of quality with some real good quality players.

“A tough task for us, especially out there, they have been very strong in Bordeaux this season. Leicester were able to get the win there last time so hopefully we’ll be able to replicate that.”

Herald Wales also spoke to Jonathan ‘Fox’ Davies who said the team had been frustrated by the cancellations of the first two games.

He said: “We’ve had a good week so far, we’re just preparing like the game is on, whatever decision is made we will adapt to it.

“Bordeaux are a quality outfit and it’s an exciting challenge to go out there and play against the top French teams.

“We went through the isolation, missed the Bristol game and preparing for Bordeaux and not getting the opportunity to play, it was hugely frustrating.

“This is a big competition and we worked hard through the league to qualify for it and this is our first crack at it on Sunday.

“You prepare every week for a game and the game just gets called off, it’s unfortunate the world we live in but we have to make sure we prepare for the weekend and hopefully the games will go ahead.”

Their game in Bordeaux takes place on Sunday, January 16, and kicks off at 3:15pm.

Wales’ World Cup play-off match vs Austria will go ahead