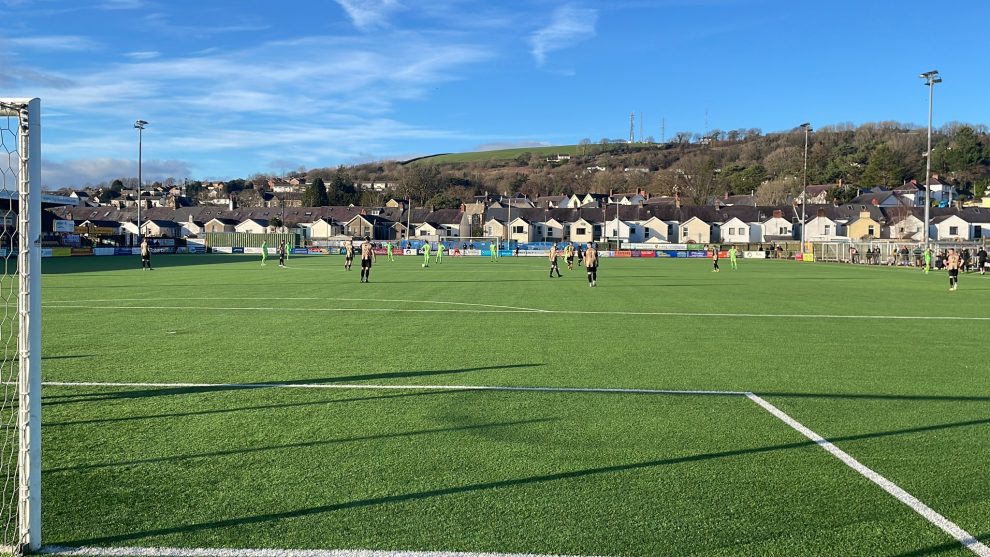 A STUNNING late goal earned Ammanford a share of the points in their game with Carmarthen Town on Monday, Janaury 2.

Carmarthen earned a 4-0 win over their opponents on December 27 and they went into this game at Richmond Park looking for another win which would have seen them keep pace with the top three.

However, Ammanford had other ideas and they came close to scoring early on. Callum Silcox did well to make some space but he saw his effort hit the post and roll along the line before being cleared away.

With twenty minutes on the clock the visitors took the lead as captain Matthew Fisher fired a low shot into the bottom corner of the net.

Their lead only lasted three minutes though as Carmarthen’s Liam Thomas headed in to level the game at 1-1.

Ammanford looked to regain the lead but the half time whistle went with the game still level and both sides held hopes of taking the win in the second half.

Just eight minutes into the second half it was the Old Gold who took the lead for the first time. The ball was played to Noah Daley, who was given too much time by the Ammanford defenders, and he fired in from the edge of the box.

Silcox then saw a shot go wide as the visitors now looked to get back level.

With just over twenty minutes to go Ammanford came within inches of scoring. Callum Thomas did well and he found Fisher but his curling effort hit the bar.

Thomas then had a chance of his own but saw his header saved by Carmarthen keeper Nicholas Jones.

With time running it looked as if Carmarthen would hold on for the win but, in the 89th minute, Ammanford finally got their equaliser. Silcox unleashed an unstoppable 25-yard screaner which flew into the net, leaving Jones with no chance.

There was still time to find a winner but it didn’t come and both would have to settle for a share of the points.

The sides are next in action on Saturday, January 7, as Carmarthen Town travel to Pontardawe Town while Ammanford travel to Cwmbran Celtic.