Otter returned to the wild after electric fence run-in 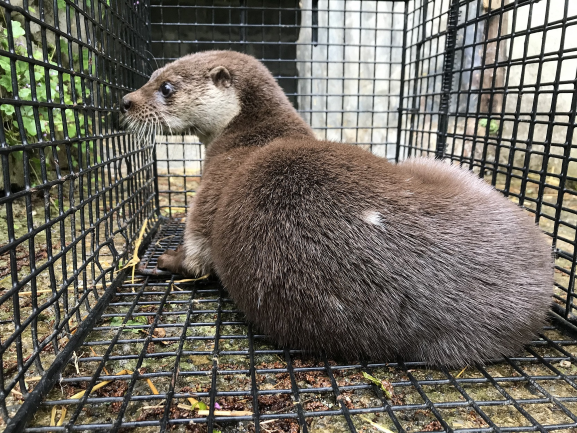 AN otter has been returned to the wild following a run-in with an electric fence in Carmarthenshire.

RSPCA Cymru was contacted after members of the public spotted the otter appearing lethargic on 22 May.

It is believed the otter had sadly run into a nearby electric fence and was disorientated from the experience.

The member of the public was able to confine the otter by placing a wire run over the top of him – before RSPCA animal rescue officer Ellie West arrived to help the animal.

RSPCA Cymru took the otter into their care – and fortunately, despite his ordeal, found no injuries, though ARO West suspects his “pride had been hurt”.

The otter was slightly underweight and hungry – so spent some time in the RSPCA’s care and was fed up before being safely returned back to the wild on 27 May.

Up-close video footage shows the heartwarming moment the otter was returned to the wild.

ARO West feels “truly lucky” to be able to work so closely with British wildlife – and said it’s always a “wonderful feeling” to be able to secure a happy ending for animals like this otter.

She said: “This poor otter was found appearing very out of sorts – and we’re grateful to the member of the public who spotted and safely confined him before I arrived.

“Thankfully, we found no injuries or serious welfare concerns – though the poor thing’s pride had been hurt, and he was quite underweight, so he stayed in the RSPCA’s care for a few days.

“Luckily, he soon had a spring in his step again and we were able to return him to the wild.

“Wildlife is such a passion of mine, and I feel truly lucky to be able to work so closely with British wildlife, like this Carmarthenshire otter.

“Sadly, so much wildlife we are called to is often severely injured or poorly – so when we have jobs to deal with like this otter, where we are able to help them and get them back to the wild as soon as possible – it’s truly a wonderful feeling.

“Otters are animals I’ve always been extremely lucky to have worked with for many years but each one is still special. Sharing a magical moment like releasing this one back to the wild is fantastic.

“When released, he came out of the cage fairly quickly and dipped into the running water and headed downstream at a fast pace through some white water. He just seemed very happy to be back where he belongs – the wild!”

A Scotsman, a Welshman and an Englishman: Devil's Bridge Rum