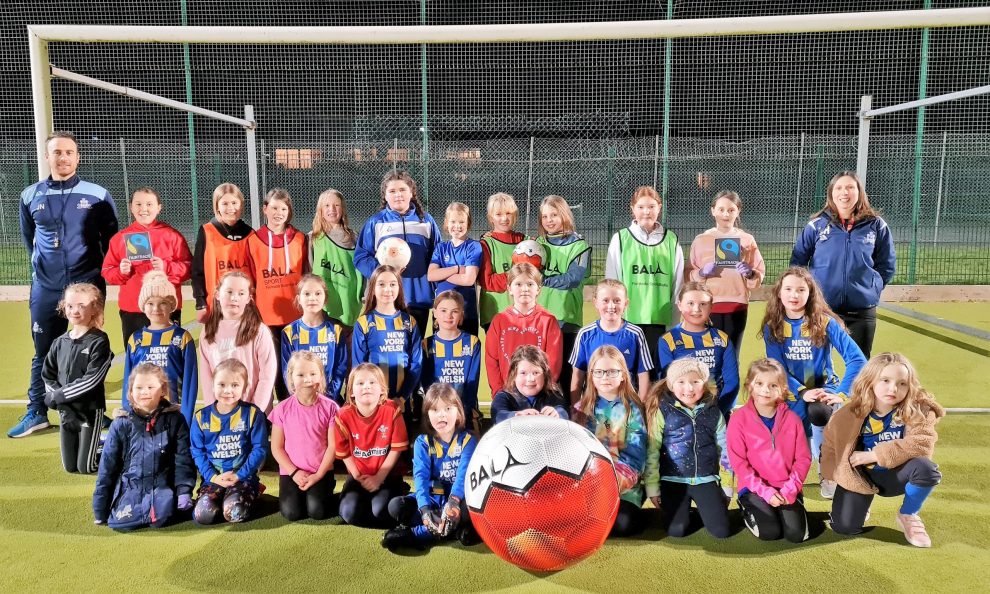 With over 70 girls registered in the Kilgetty AFC Under 8s, 10s and 12s Girl’s teams, the popular sessions offer fun training, giving the girls the opportunity to learn new skills, make friends and have fun.

Kilgetty AFC Girl’s value fairness in their games, and as Under 12s coach Sharron Hardwick is the founder of the Fair Trade In Football Campaign the group are often reminded about the people who make their football fun possible, the football stitchers.

“The girls love playing football. Nothing is worse than bad sportsmanship and unfairness in games, that’s why we buy and use Fairtrade footballs, so we know that those who make the footballs, their families and communities are getting a fairer deal. Fairtrade makes us feel we are part of a bigger team by supporting football stitchers.” Shared Sharron.

Fairtrade guarantees workers have safe and fair working conditions, using the best methods for the environment, with no forced or child labour. The extra income from the Fairtrade Premiums, a sum paid for each Fairtrade sale, goes to a Fairtrade Committee who use the money to pay for whatever their communities need most; such as clean water, healthcare, education, training and more.

So far Fairtrade Premiums from Fairtrade football sales have been used to pay for a community water filtration system, free eye care and transport for workers based in Sialkot, Pakistan.

Bala Sport, the UK based business providing ethically produced Fairtrade certified sports balls, with new custodians and Fairtrade Founders, Traidcraft, are currently in the process of securing the production of new Fairtrade footballs, which will be available to purchase in the UK later this year.

Kilgetty Under 12s played their game against Camrose Under 12s on Sunday using a Fairtrade football and they each enjoyed a pack of Fairtrade Maltesers after training on Friday.

The under 8s, 10s and 12s Girls teams currently train during term time on Friday evenings from 6.30pm to 7.30pm at Greenhill School AstroTurf, Tenby. Sessions will move back to their home club, Kilgetty AFC, Kingsmoor Sports Club, from April on Tuesday evenings from 5.30pm to 6.30pm.

Kilgetty AFC Football Festival will take place on May 2nd for Under 8s 10s 11s and 12s Boys/Mixed teams and Under 8s, 10s and 12s Girls To Register please follow https://form.jotform.com/kilgettyfootballfestival/2022

If you’d like to join Kilgetty AFC as a DBS checked volunteer, train to be a coach, join the new ladies team or to register your daughter as a player, please contact James on 07872 594290.

For information on the Fair Trade In Football Campaign visit www.fairtradeinfootball.com