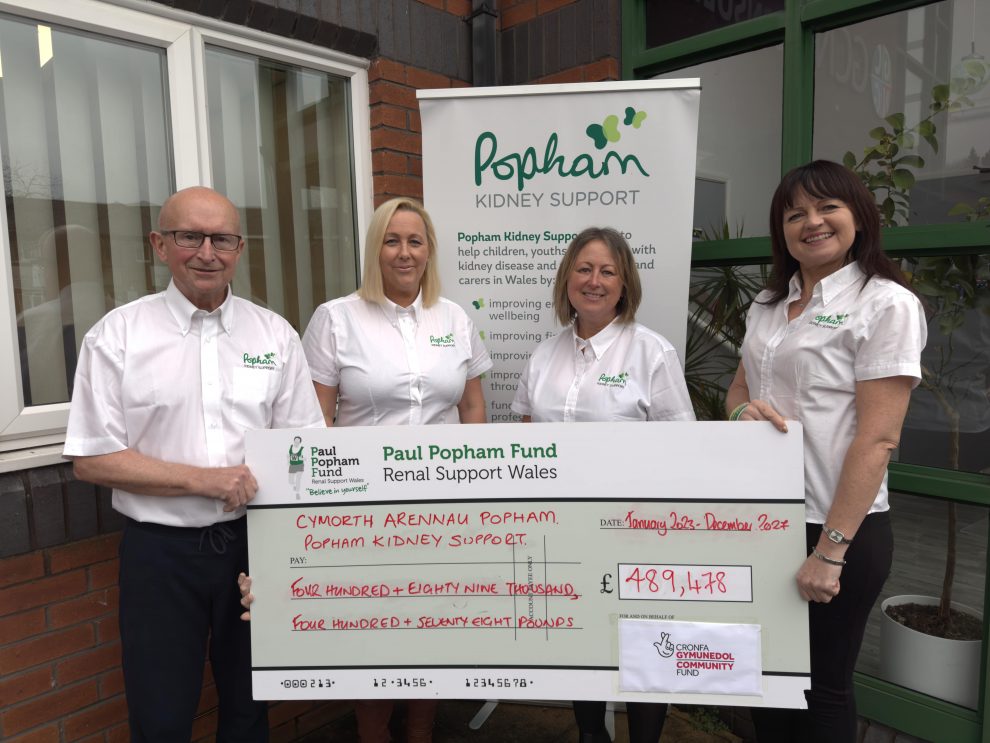 SWANSEA-based kidney charity, Popham Kidney Support, recently announced it will receive £489,477 of grant funding from The National Lottery over the next five years, during its tenth year in operation.

The 5-year grant from People & Places was awarded to develop the charity’s Peer Support Services throughout Wales. The funding was awarded based on the charity providing a five-year plan for growth, focusing on its expansion across the whole of Wales.

To facilitate this development, the charity is expanding its recruitment of volunteers, peer mentors who are people with or affected by kidney disease themselves. Over the next five years, the charity aims to expand its team of peer mentors to 123 and recruit 30 Youth Peer Mentors from across Wales. These Youth Peer Mentor volunteers will provide dedicated one-to-one support to young people affected by kidney disease and their families.

The National Lottery funding comes during Popham Kidney Support’s tenth year in operation. The charity was initially founded as ‘The Paul Popham Fund, Renal Support Wales’ in March 2013, five months after the passing of Paul Popham – father of its current CEO, Joanne Popham – following a courageous battle with kidney disease and kidney cancer.

Fast forward to today, and the charity has grown exponentially, supporting over 3,000 people during 2022 alone.

With its flagship peer support service at the forefront, it now provides support in the form of: one-to-one support in-person and over the phone for kidney patients and family members alike; group activities such as its exercise for health group and kidney crafters group, support groups and educational groups via its Kidney Café initiative; and providing information and advice to kidney patients in the form of Q&A’s, webinars and newsletters.

The marquee event of its ten-year celebration is its Spring Ball, taking place on March 25th at the Coal Exchange, Cardiff. The event will be hosted by Popham Kidney Support ambassador, TV journalist and broadcaster, Sian Lloyd, with the primary focus being to raise money for the £130,000 refurbishment of the Children’s Kidney Centre at Cardiff & Vale University Hospital.

The event will also include entertainment from the award-winning Welsh band, ‘Who’s Molly’, and will feature an award ceremony that celebrates the work and effort that its supporters and volunteers have contributed since the charity’s inception in 2013.

Tickets can now be purchased by contacting [email protected], with sponsorship packages also available to purchase.

“The funding also comes at the beginning of our 10-year celebrations – what a start! Celebrating our 10th year is bittersweet for our family, and one we hope our patron saint, Paul Popham, would be proud of. We celebrate in his name and honour, and will signify our 10th anniversary at our Spring Ball in March, where a band he absolutely loved, Who’s Molly, will be playing. It will certainly be our showcase event of the year. We also have several other events to look forward to throughout the year and an exciting year-long campaign that everyone can get involved in.

“I would never have expected the charity to be where it is today; it has been a long, fulfilling and bittersweet ten years. We have ambitious expansion plans in order to maximise our impact on the kidney community, and we’re all looking forward to seeing what the future holds.”