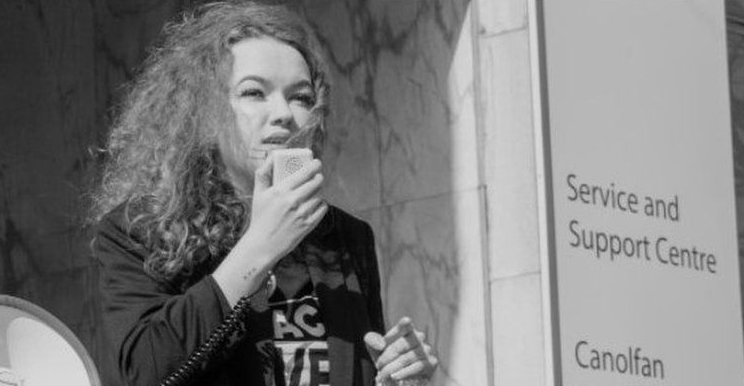 The Black Lives Matter activist claims that her trust was destroyed when the police attempted to enlist her as an informant.

The campaigner said she was confused when she was asked to give information about far-right activists who were also protesting at Black Lives Matter demonstrations.

Lowri claims that she was called “out-of-the-blue” one Tuesday morning.

Speaking about the incident, Lowri said: “”She says that she is a covert police officer and she works for informants, usually with drugs and burglary and, in my case, the protests.

“And she said that she was interested in other groups turning up and causing chaos in our protests and being not from our movement.

“But to be honest, I knew that this was a ruse, because what would I know about other groups… I’ve got no information on that – I’m a part of Black Lives Matters Swansea – the alt-right is not something that I’m very aware of.”

Ms Davies then said that a meeting was arranged between herself and the officer, as well as a superior officer, for the following day.

She spent 90 minutes with the officers. During this time she was asked about her family, the BLM movement, and the alt-right.

Talking about the meeting, Lowri said: “I was absolutely terrified, I can’t really explain how terrified I was, I was so terrified that I just went completely numb.” She did not respond to any subsequent calls made by the officers.

She says that the experience has made her question herself. She now has a “vetting process” in her head when new people come into her life.

Lowri says she had a good working relationship with police during the protests, but added: “For them to turn around and almost ‘good cop, bad cop’ me really destroyed what I thought was going on.”

She said she is surprised police would want to infiltrate her group, describing their group as a small non-violent group.

“It really hits home when it’s in the UK, and especially in Swansea. We’re a small non-violent group… it was really, really confusing, scary and baffling,” Ms Davies added.

Former chief constable of the Gloucestershire force, Tim Brain, who now writes on police matters, says that the use of informants is a “highly regulated field”.

“They have to be recruited under a very strict regime where there is an authorising officer, a handler and a controller so there’s a lot of oversight about the recruitment and the way an informant – or as they’re now properly called, a covert human intelligence source – operates,” he added.

“Think in terms of the old British crime dramas of the ’70s or even the ’80s and just forget all of that – the recruiting and the handling of a covert human intelligence source is now specialist work by a specialist unit within a police force.”

In a statement, South Wales Police said it would “neither confirm nor deny any specific details in relation to this matter”.

“A complaint has been received which refers to contact made by a covert officer. This is currently being considered by the force’s professional standards department and therefore it would be inappropriate to comment further at this time,” it said.

“The use of informants is a well-established and highly regulated tactic used by police forces across the country to protect the public. Their use is controlled within strict legal parameters by trained specialised staff and the accountability and protection of the informant and the public is paramount.

“Protest organisers have an obligation to liaise with police forces and South Wales Police has a proven track record in working with organisers to facilitate lawful protest while minimising disruption to the wider public.”

Woman critical in hospital after incident in Swansea