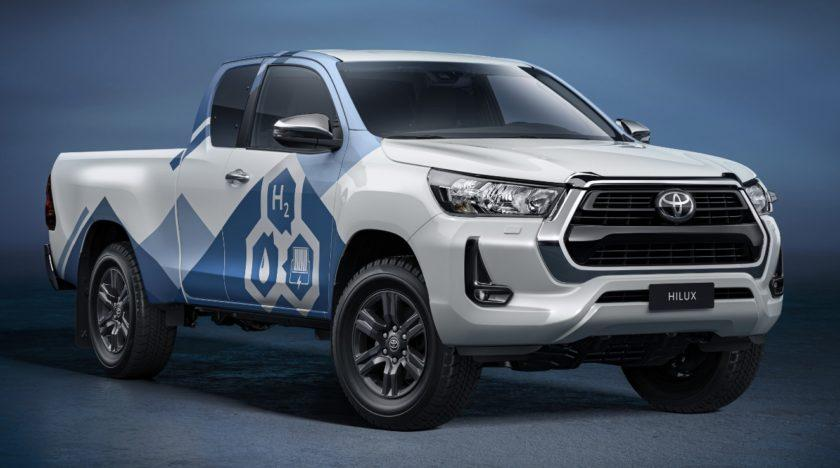 Toyota Manufacturing UK (TMUK) has been awarded over £11m of funding to help it develop a new range of hydrogen-powered pickup trucks which could secure jobs in Deeside.

The funding is part of more than £70 million in joint Government and industry funding to develop clean transport technology.

The Department for Business, Energy and Industrial Strategy is investing £5.6m in the research scheme with a further £5.7m coming through the Advanced Propulsion Centre (APC) – an industry body which supports work to decarbonise transport.

The project will make use of components from Toyota’s second generation fuel cell system, as featured in the latest Toyota Mirai saloon, to transform a Hilux into an electric vehicle.

The funding will allow Toyota to set up a pilot production line for a hydrogen version of Toyota’s iconic Hilux pickup truck at its plant near Derby.

Instead of being powered by electricity stored in a battery, hydrogen fuel cell electric vehicles produce their electricity through a chemical reaction between hydrogen and oxygen in a fuel cell stack.

Within the scope of the funding bid, initial prototype Hilux vehicles will be produced at Toyota’s UK vehicle plant in Burnaston, Derbyshire during 2023.

Once successful performance results have been secured, the intention is to prepare the vehicle for small series production.

The work could see Toyota’s factory in Deeside switch to hydrogen fuel cell production in the future.

The project will support more than 250 jobs including Deeside over the next decade.

“Toyota has the ultimate goal to become a carbon neutral organisation. The first step in this evolution was introducing hybrid 20 years ago and has expanded to include Battery EVs, PHEVs and hydrogen power.”

“This exciting project allows Toyota the opportunity to develop a unique fuel cell commercial vehicle on the iconic Hilux platform, in the UK.”

“This will significantly contribute to the skill base not only within Toyota in the UK but also through the consortium partners and wider supply chain.”

“The collaboration with highly-skilled technical engineering companies of all sizes allows the development of new and innovative solutions.”

“We would like to thank the APC for its support in realising this bid as well as the UK Government in recognising a key opportunity to decarbonise a critical vehicle segment required by industry.”

“Our automotive industry is a world-leader.”

“Seizing the potential from new technologies will be a key part of its future success, while also making our roads cleaner, greener and more affordable.”

“Today’s multi-million-pound boost – created by Government working hand-in-hand with industry – will put these firms in pole position to pioneer these innovations, staying at the cutting edge of the global race for decades to come.”