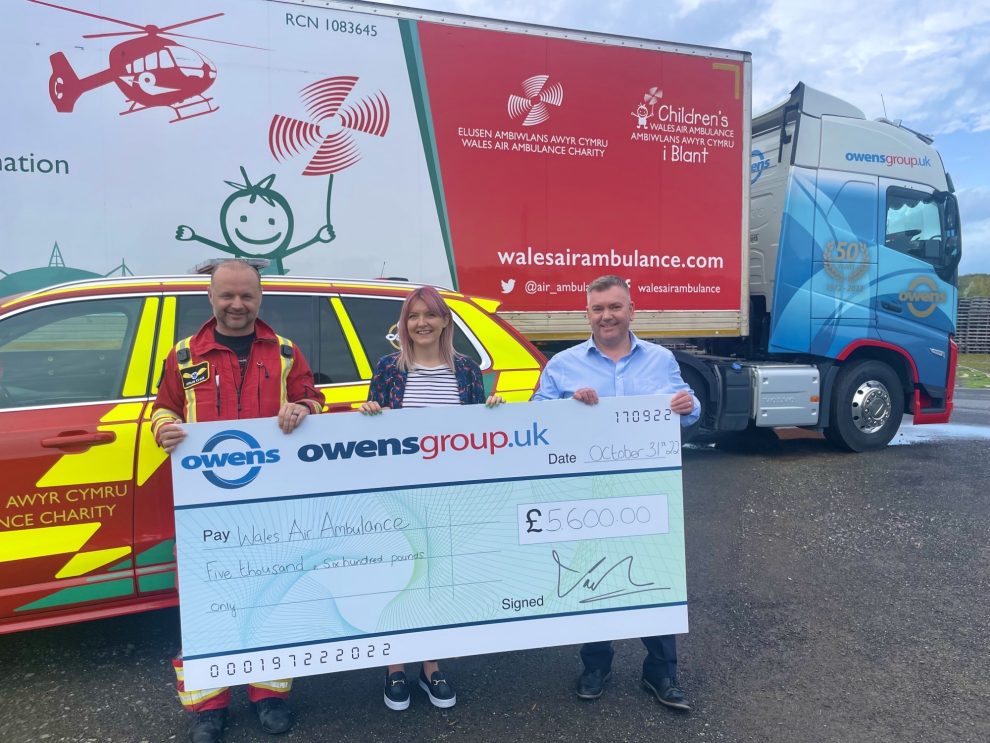 A CARMARTHENSHIRE logistics, warehousing and distribution company has marked half a century in business by raising money for the Wales Air Ambulance.

Llanelli-based Owens Group celebrates its 50th anniversary this year having started trading with just one van, carrying furniture, kitchens, and piano parts back in 1972.

Now the company has a fleet of more than 1,500 assets, including vans, trucks and trailers, and is considered one of the UK’s leading family-owned logistics, warehousing and distribution companies.

To mark the incredible milestone, Owens Group, which was founded by Huw Owen MBE, held a family fun day for its staff in September at their new headquarters in Bynea. The company acquired the former Schaeffler / INA Bearings building in 2020.

As part of the family fun day, a raffle was held in aid of Wales Air Ambulance which raised £2,800. Owens Group then match-funded the amount bringing the total to an incredible £5,600. The event also included superhero characters, bouncy castles, mini golf, live music and featured local celebrities.

Ian Owen, Owens Group Managing Director, said the company wanted to celebrate their anniversary by giving to a deserving charity.

He said: “As a company, we celebrated our special 50 th anniversary family fun day with our staff and we wanted to use this milestone as an opportunity to support a good cause.

“The Wales Air Ambulance headquarters is based in Dafen, Llanelli, where we also held our original head office for almost 50 years. The fundraising was incredibly well supported by all our staff on the day and, as a company, we wanted to match-fund it.

“The helicopters regularly fly over our headquarters in Bynea and our Dafen depot. We are delighted to have helped raise a significant amount of money for the Charity through our family fun day and we are already looking at other ways in which we can help support the Wales Air Ambulance in the future.”

The Charity relies on charitable donations to raise £8 million each year to keep the helicopters flying in Wales. It does not receive funding from the National Lottery or direct funding from the government.
The Wales Air Ambulance service offers advanced critical care across Wales. It is delivered via a unique Third Sector and Public Sector partnership between the Wales Air Ambulance Charity and the Emergency Medical Retrieval and Transfer Service (EMRTS Cymru).

As a result, the service is consultant-led and is known as a ‘flying emergency department’, taking hospital-standard treatments to the patient at the scene of an incident. This includes the ability to administer anaesthesia, deliver blood transfusions and conduct minor operations, all at the scene of an incident.
Siany Martin, Corporate Fundraiser for Wales Air Ambulance, said: “We are thrilled and extremely thankful to receive an incredible £5,600 from Owens Group from their family fun day. It looked like a fantastic day and a huge congratulations to you on your 50th anniversary.

“This donation will help our medics to be there for the people of Wales when they need us most. We are looking forward to working with you in the future and are very grateful for all your support.”