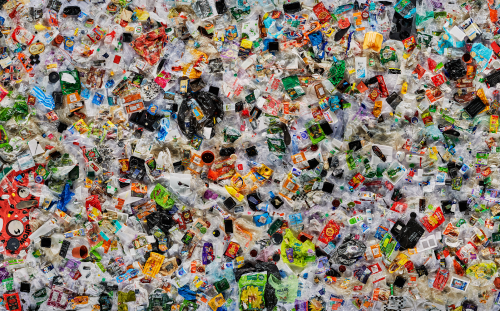 ON SATURDAY, May 7, Greenpeace Swansea volunteers spoke to members of the public about The Big Plastic Count by Croeso Lounge in Oyster Wharf, Mumbles.

Volunteers showed passers-by a photo of the six months’ worth of plastic used by Everyday Plastic Founder Daniel Webb, and asked them to guess how many people’s plastic this was. Hardly anyone guessed correctly, and many were way out!

The Big Plastic Count, a collaboration between Greenpeace and Everyday Plastic, is taking place between May 16-22. It will uncover the truth about how much household plastic we throw away, and how much is really recycled.

Individuals, households, schools, community groups and businesses across the UK will count their plastic packaging waste, record the different types they throw away and submit their results online. The campaign is supported by actor Bonnie Wright, as well as naturalist and television presenter, Chris Packham.

Sue Hale, from Southgate, said:  “We’re all doing our bit to recycle, but plastic waste is still everywhere. On Gower beaches during the summer there is increasingly more left every year. That’s why I’m counting my plastic for one week between 16th – 22nd May, and submitting this data to get my personal plastic footprint, to find out what really happens to our plastic waste.

“More than 63,000 people from across the UK including 100 households in Swansea have signed up to take part so far. Sign-up to take part too at https://thebigplasticcount.com”

The data each participant generates will contribute to an overall national picture, filling a crucial evidence gap on exactly how much plastic packaging waste is leaving UK homes.

The launch of The Big Plastic Count comes as new polling from YouGov, commissioned by Greenpeace UK, shows that more than four in five people (81%) want the UK Government to introduce targets to reduce plastic waste. Across the Midlands and Wales support is also high at 79%.

The YouGov survey also shows how almost four in five (77%) people in the UK recycle plastic products in order to reduce plastic waste. However, three in four (75%) don’t know what happens to their plastic recycling after disposing of it.

The UK produces more plastic waste per person than almost any other country in the world – second only to the USA. In 2018, the UK generated 5.2 million tonnes, enough to fill Wembley Stadium six times over.

Brian Jones, Swansea Greenpeace volunteer from Pontardawe, continued: “I was amazed that one person used so much plastic in 6 months. I put the plastic I use in the recycling bin, so I’m disappointed to hear that lots of that plastic might not actually be recycled, but is in fact often incinerated, sent to landfill, or dumped abroad. It’s up to the Government and big supermarkets to cut plastic packaging, and to properly deal with our waste.”

This year, the government is starting to decide on legal targets to reduce plastic waste. Greenpeace Swansea is calling on the Government to set a target to reduce single-use plastic by 50% by 2025, to introduce a Deposit Return Scheme for plastic reuse and recycling, and ban the dumping of our waste onto other countries.