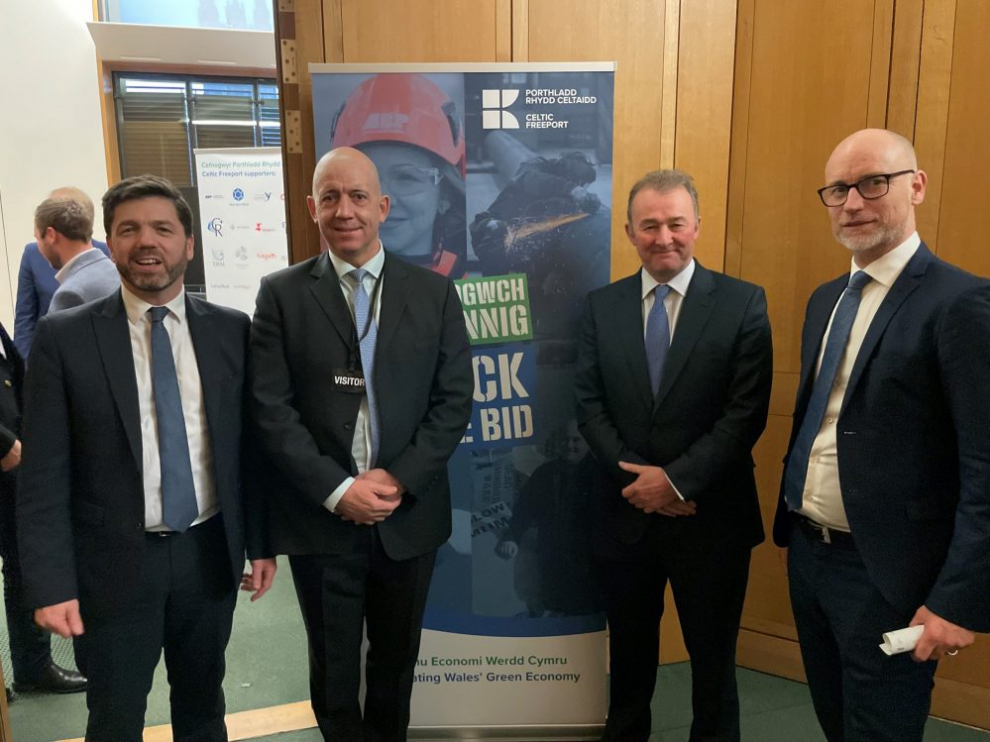 Highlighting past failures of industrial policy which has left a trail of failed enterprises and parks in its wake, Crabb used the opportunity to urge Ministers to ‘recognise the strength of the Celtic Freeport bid’ and to back projects that work with the ‘grain of the private sector’ for maximum impact and success.

The Celtic Freeport bid, if successful, will accelerate new green industries such as Floating Offshore Wind (FLOW) in the Celtic Sea and hydrogen production – triggering investment in the region of £5.5 billion and creating over 16,000 high-quality green jobs.

Momentum for the bid continues to build with over 100 supporters from cross-party, public sector and industry support, from Tata Steel and RWE to Manufacturing Wales and South Wales Industrial Cluster having already come forward to back the bid.

In addition to raising the freeport bid in the House, the Conservative Preseli Pembrokeshire MP and Labour Aberavon MP, Stephen Kinnock, co-hosted a drop-in briefing session for MPs and Peers (Wednesday 18th January) to hear direct about the Celtic Freeport bid from the consortium representatives on the day. The successful event drew attention to the economic story that the Freeport could help deliver for Wales and picked up more cross-party backers from independents, Plaid Cymru, Conservative and Labour members at the meeting.

Speaking to the BBC, who also attended the event, Stephen Crabb MP said, “I’ve enjoyed introducing fellow MPs and peers to the Freeport bid consortium representatives to talk through the scale of the opportunity, how the benefits can be secured for our area and why the case for Floating Offshore Wind is so compelling.

“This opportunity crosses all political divisions and that is what makes the Celtic Freeport bid so powerful. We want to secure as many benefits as possible for south west Wales by unlocking investment, jobs and skills to create a lasting economic legacy which will benefit future generations. And the MPs backing the bid so far recognise that this bid is the launch-pad to achieving this new era of manufacturing and green jobs.”

Tom Sawyer, Chief Executive of the Port of Milford Haven, who attended the event organised by Stephen Crabb in Parliament, said: “With cross-party support from across Wales, the briefing session for MPs and peers builds on the fantastic backing we’ve received from the Senedd, local councils and social partners. Our bid will accelerate the nation’s path to a greener future firmly rooted in two expanded deep-water energy ports at Port Talbot and Milford Haven. The new supply chains we are developing will bring the economic benefits of long-term, well paid, highly skilled jobs to the four corners of Wales and into the UK. Whether it’s creating a new green industry in floating offshore wind or forging a hydrogen economy, Celtic Freeport will be great for Wales.”

ABP’s Chief Executive, Henrik Pedersen, commented, “I am delighted to see the strong cross-party support for the transformational Celtic Freeport bid. The Celtic Freeport will unlock new economic growth, fast-track future green skills for new green industries and advance manufacturing across the whole of Wales. It will also position the ports of Milford Haven and Port Talbot at the heart of emerging green technologies such as floating offshore wind, while supporting industrial decarbonisation and the UK’s transition to net zero. The Celtic Freeport will be great news for Wales and the UK. I urge everyone to back the bid.“

With the UK and Welsh Governments expecting to determine the success of the bid in March, alongside 2 other freeport bids which have been submitted from other regions in Wales, there is still time to show support at www.celticfreeport.com