THE OPEN UNIVERSITY (OU) in Wales has produced a new film which explores the growth of misinformation and disinformation, and their damaging impact on democracy. Fake News in Wales is set against the backdrop a growing awareness of devolution as well as the Coronavirus pandemic.

The film explores the difference between misinformation, disinformation and fake news – a term which became commonplace during the presidency of Donald Trump – and how each of these can affect the relationship between democracies and the public.

In the film, expert contributors discuss the role of politicians and the difference between the way Wales-based and UK-wide media outlets report Welsh news, and consider the challenges this has presented during the pandemic. These include uncertainty around where decisions are made, and what people in Wales, England and the UK have been allowed to do at different stages.

Fake News in Wales features contributions from Dr Philip Seargeant, Senior Lecturer in Applied Linguistics at the Centre for Language and Communication at The Open University, Jess Blair, Director of the Electoral Reform Society Cymru, Will Hayward, Welsh Affairs Editor at WalesOnline, and Shaun Bendle, one of the founders of the @thatsdevolved twitter account.

Speaking in the film, Dr Philip Seargeant told The Herald: “The basic meaning of ‘fake news’ is information that’s false or fabricated and that is being passed off as news, and thus as real. It is something that can potentially affect us all and the way we live our lives. Disinformation is false information which has been created on purpose, and so it’s often a type of propaganda. Misinformation is where the false information is more accidental, but it’s still false and so it can still be very disruptive.

“The Covid pandemic is a very good example, because you really want reliable information, so that people know what they can, what they should be doing. And it can have very serious consequences because this is to do with issues, of ultimately, life and death.”

Fake News in Wales is part of a new Active Citizenship in Wales hub produced by The Open University in Wales for OpenLearn, the OU’s free learning platform. Included on the hub are articles on How to Read the News, Six Ways to Get Your Voice Heard, as well as a free course on Understanding Devolution in Wales.

Louise Casella, Director of The Open University in Wales said:

“Our new Fake News in Wales film offers a fascinating insight into how misinformation and disinformation can threaten our democratic principles, weaken our citizens’ ability to hold decisionmakers to account, and to have their voices heard. Though the term ‘fake news’ was popularised in the US, the expert contributors in our film demonstrate why we in Wales cannot afford to rest on our laurels in ensuring that people here are equipped to think critically about the news they consume.

“Our free Active Citizenship in Wales hub is the latest development in our mission to open up learning to the Welsh public and help encourage constructive debate. For devolved democratic government to function effectively, we need informed citizens who can read between the headlines and scrutinise the work of policymakers. I hope learners and other organisations across Wales will find it useful and thought-provoking.”

Fake News in Wales, the Active Citizenship in Wales hub and over 1000 free courses are available now on OpenLearn. 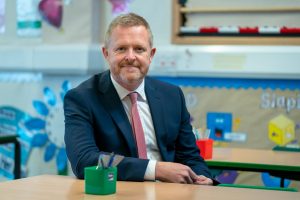