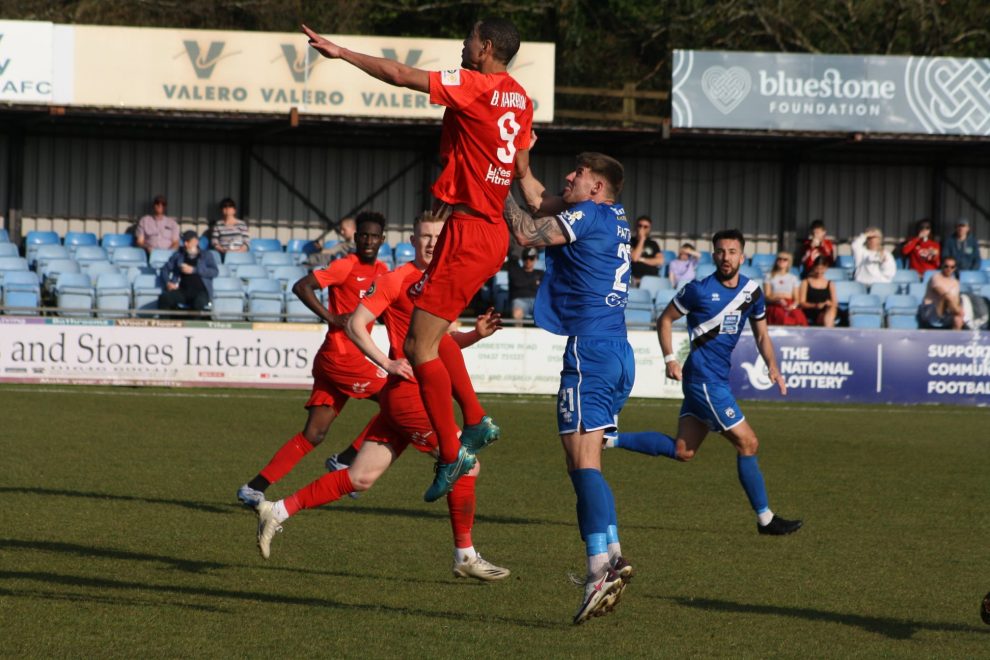 Haverfordwest County played out a 0-0 draw with Connah’s Quay Nomads at a sun-drenched Ogi Bridge Meadow in the JD Cymru Premier Play-Off Conference on Saturday (Mar 26), extending their unbeaten run to six matches.

The game, which was shown live on S4C by Sgorio, was an attritional and physical affair, with clear-cut chances hard to come by as the sides were forced to settle for a point apiece.

County had the better chances to score, with Alhagi Touray Sisay denied from point-blank range, before Ben Fawcett saw his shot from close range saved early in the second-half.

The result sees the Bluebirds move up a place to seventh (top of the Play-Off Conference), after Cardiff Metropolitan lost 2-0 to already-relegated Cefn Druids at The Rock.

Manager Nicky Hayen made just the one change to the team that beat Aberystwyth Town 6-0 last Tuesday, with Danny Williams taking the place of Jordan Davies who was ineligible to play against his parent club.

The first close call of the afternoon fell the way of the Bluebirds, when Williams’ ball into the area nearly picked out the head of Touray Sisay, but goalkeeper Oliver Byrne just got there first to intercept.

Lee Idzi had another impressive afternoon between the sticks, as he was called into action for the first time shortly after when he made a sharp save from a free-kick.

After winning the ball back high up the field, Williams spotted Byrne off his line and decided to try his luck from distance, but the ball flew wide of the left post.

After Nomads midfielder Paulo Mendes found the side netting with his shot from inside the area, the Bluebirds had a great chance to take the lead when Ben Fawcett’s clever flick gave Jazz Richards space to break into the area unopposed, as his cross picked out Touray Sisay who flicked the ball goalwards, but straight at Byrne, with the rebound coming back to the striker before hitting the right post.

County started the second-half well, with Touray Sisay collecting a second ball from a throw-in before it went loose and landed at the feet of Fawcett, who struck it first time from inside the area, but was denied by an instinctive save from Byrne.

Just a minute later, Touray Sisay went close when a ball upfield was headed into his path by Williams, as he unleashed a powerful volley from just outside the area which just cleared the crossbar.

Idzi was alert to keep the score at 0-0 when he reacted quickly push Aeron Edwards’ snapshot from inside the area to safety, before coming off his line decisively to palm the ball away from the clutches of Mendes.

Both teams were finding it difficult to play through the respective midfields, with efforts from distance proving to be the more favourable method, as Kurtis Rees let fly from distance but was denied by Byrne who got down low to his left.

Hayen made a double substitution with the final 20 minutes approaching, as Henry Jones and Ryan George came on in place of Williams and Touray Sisay to provide fresh legs.

It became clear in the closing stages, however, that the sides were beginning to run out of ideas in attack with both defences on top throughout.

The final stanza of the game was played out with neither side looking like finding a late winner, with the point probably suiting both managers, as County climbed to seventh and the Nomads moved out of the relegation zone.

The Bluebirds are next in action on Saturday, April 2 when they travel to the capital to take on Cardiff Metropolitan. Kick-off is at 14:30.