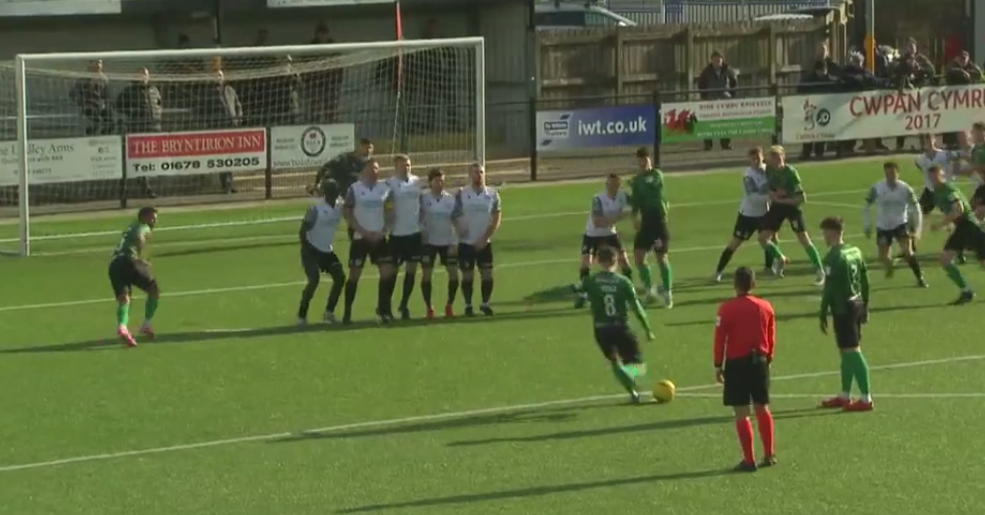 TWO superb free kicks ensured that Aberystwyth Town ended phase one on a high, earning a well deserved 2-2 draw at Bala on a sunny February afternoon in Gwynedd.

After a very creditable first half performance Aber fell behind to goals from Will Evans (60 mins) and Nathan Peate (69 mins), but then livewire sub Owain Jones earned, then converted from Matty Jones’ 86th minute free kick, before being fouled again to give Jamie Veale the chance to score directly in the 95th minute, and delight the visiting Green Army.

The Black and Greens are on a good run in the league, having lost only one in five previous to this match, and they started confidently.

Sam Phillips volleyed wide early on, then had another effort blocked soon after. Lee Jenkins, superb in the air, was keeping Dean Ebbe quiet, and at the other end Jon Owen tested Alex Ramsey with a low drive.

Aber were defending really well, restricting their top six hosts to almost nothing in terms of real chances, and Harry Franklin’s trickery earned him an opening, but his shot was blocked.

Sean Smith had an attempt for Bala deflected over for a corner but other than that Alex Pennock was secure in goal, and Owen volleyed a right wing cross wide from a dangerous position.

Ebbe grazed the bar with a header but at half time Aber had certainly created most of the chances –the scoreline however remained goalless.

The hosts came back into it after the break and Ebbe had a header saved on the line by Pennock.

On the hour a free kick from Lassana Mendes bounced back out for Evans to skilfully hook home a volley into the top corner, and the hosts were ahead.

Nathan Peate headed wide for Bala, and then Rhys Davies saw a header loop just over the bar from Jones’ cross, but with just over 20 minutes to go another free kick landed at the feet of Peate on the goal line, and he surely won the game with Bala’s second from two yards.

Bala’s Dave Edwards headed wide soon after, but Aber’s young guns have won plaudits this season for their never say die attitude, and bolstered by the return of Owain Jones from injury, and Jonathan Evans, they mounted a thrilling comeback, courtesy of the two Jones’.

First the nippy Owain was fouled on the edge of the area, and Matty’s beauty of a free kick rebounded off the right hand upright for Owain to acrobatically score.

Owain then sent a volley effort just wide, Jonathan Evans’ volley was deflected over for a corner, and Veale’s delivery was cleared off the line.

It was all Aber, and right at the death Bala unwisely fouled Owain Jones again on the edge of the box, and up stepped Jamie Veale to find the top left hand corner with an excellent free kick to level the game.