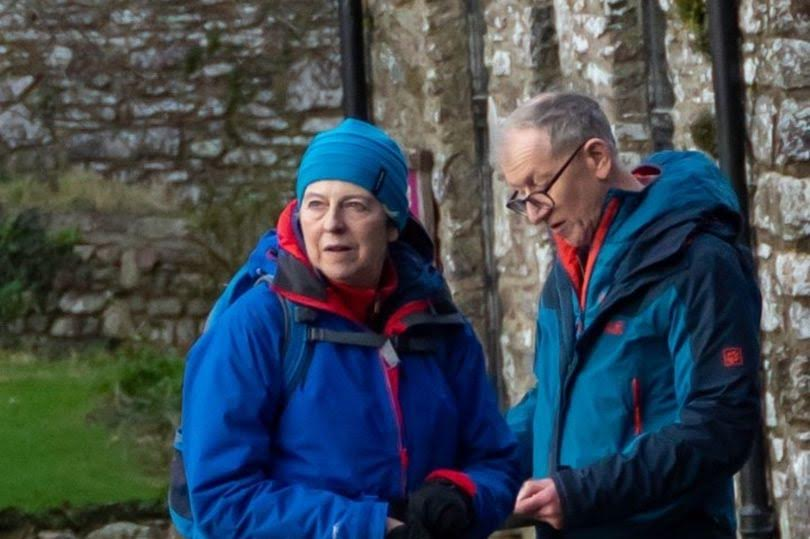 THERESA MAY, the  former British Prime Minister,was spotted enjoying a popular Pembrokeshire tourist hotspot last week but her private security guards stopped her having a selfie with a local.

May, who resigned from the top job in 2019, was visiting St Davids Cathedral with her husband Philip in rather blustery conditions. They were spotted by local photographer Guy Caron who asked Mrs May if she would have a photograph with him as she left the cathedral building on January 4.

But her private security guards stepped in and Guy had to be content with snapping from a distance instead. As someone who specialises in landscapes, wildlife and macro photography, the subject matter was a bit out of his comfort zone. But he said he “knew this would probably never happen again”.

He managed to capture a brief moment of pause as Mr and Mrs May flicked through a guide book in the cathedral grounds.
It’s not the first time Mrs May and her husband have sought escapism in Wales – in April 2019 the couple headed to the mountains of north Wales for a walking holiday. At the time there was political turmoil as the then-PM was wrangling with the seemingly-endless machinations of Brexit.

Guy Caron’s photography can be seen at: https://www.instagram.com/guy_caron25

Nut-thing wrong with that! Trees to be planted across the county
Prolific Pembrokeshire child rapist jailed for life