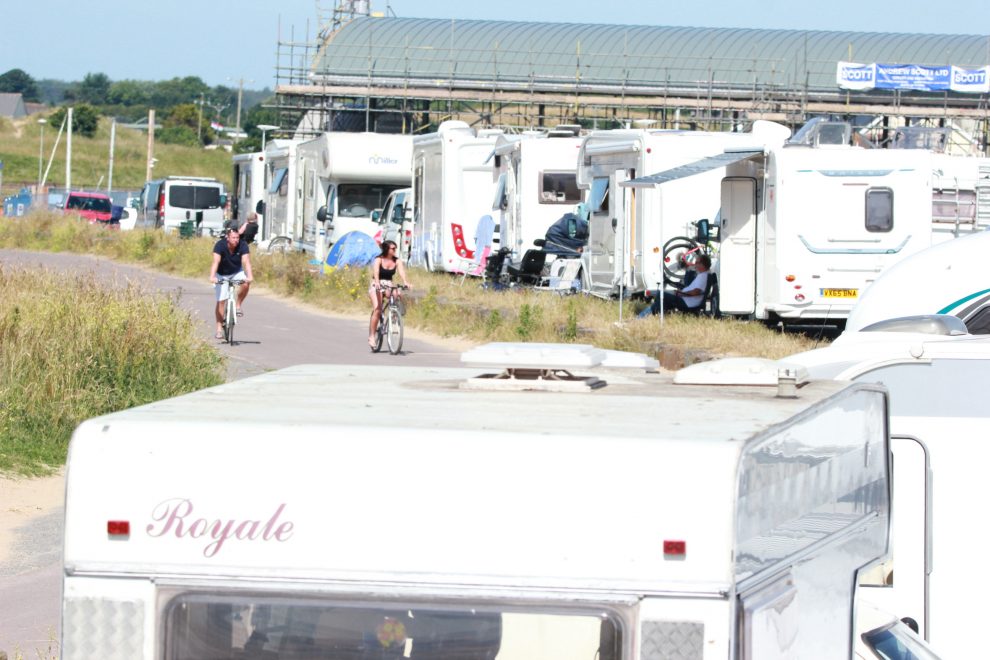 CONCERNS have been raised about the lack of facilities and administration for camper vans at what appears to be a semi-official overnight car park in Burry Port.

The East Car Park at the harbour was home to around 50 motorhomes and camper vans during the recent hot weekend. Traditionally, overnight parking was permitted on the site and monitored by Carmarthenshire County Council, which charged a small fee.

However, this summer there has been no charge to use the east car park, and the number staying overnight or longer at the site has boomed. This has coincided with a reduction in space as a result of building works on the new RNLI building.

Recently, a vehicle which parked obstructing the lifeboat’s low tide launching point had to be towed away by police.
It is unclear who is currently in charge of the site, but while operational control of the harbour was passed to marina specialists the Marine Group earlier this year the contact details advertised on the Camper Contact website are those of CCC’s Parking Services.

Several campers said that they would be willing to pay to park at the site, which boasts stunning views across the Loughor estuary, and cars parking in other parts of the harbour are still charged.

Recent concerns have been raised about the number of toilet facilities available in the harbour. Guidelines recommend that for 30 camping pitches, one toilet and urinal for men and two toilets for women should be provided.

One of the two toilets on the east side of the harbour was out of order for part of the weekend and these also serve the harbour’s many other visitors. This situation was exacerbated by the enforced closure of the toilets on the lighthouse side as a result of vandalism.

Burry Port’s Deputy Mayor Cllr Lisa Mitchell said that ‘as a Town Councillor I have been informed by our local Burry Port County Councillors that this matter is being dealt with by the County Council’.

“I am hopeful that action will be announced shortly,” she added.

“The Harbour area is currently in a transitional period with the Marine Group entering into a lease agreement with Carmarthenshire County Council on maintaining the Harbour,” he explained.

“The Harbour Masterplan, which was presented to the public last April in the Memorial Hall and was well received, consists of different initiatives such as housing, leisure, an hotel and pub. Cllr. Amanda Fox and I, after speaking to local residents, have approached the County Council about having a Water Sports Centre located here as well as looking at land near the Skateboard Area and adapting it to cater for Camper Vans and adding essentials such showering and clothes washing facilities, with a proper booking in system.

“The current situation with the Camper Vans cannot go on, with local residents finding it difficult to find parking spaces and due to the recent issue that led to an obstruction to the Lifeboat Crew that had been called out for duty.

“The toilets are being looked at as to how we can improve this much-needed facility. Unfortunately, the toilets on the Lighthouse side have been subjected to mindless acts of vandalism which has culminated in serious damage being carried out, which meant they had to be closed and are currently in a state of repair but will be reopened.

“The planned State of the Art Playground is going through the Planning Process. This Playground will cater for children of all ages, including teenagers, and will have equipment that can be used for children with disabilities, and will be located at the grassed area opposite to Parsons Pickles.”