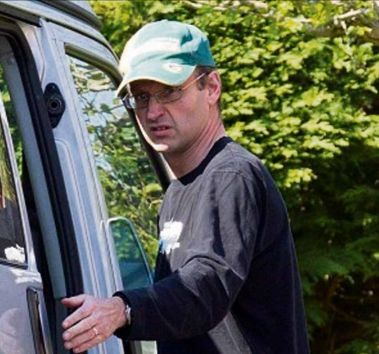 A HIGH-RANKING army officer has been jailed for taking pictures of children as they changed on a popular Pembrokeshire beach.

Holidaymakers became suspicious of 43-year-old Lt Col Mark Smyth’s behaviour in August this year, the court heard.Smyth from North Somerset was already part of a sex offenders’ treatment programme for a previous offence.

Jailing him for 16 months, Judge Paul Thomas described his actions as “deliberate and cunning”. Swansea Crown Court heard that Smyth had been given a second chance by a judge after a previous court hearing in May was told of his military career in Afghanistan and Iraq.

He was allowed to keep his job in the army with the same rank after being caught with 5,000 images of children and sharing them with otherpaedophiles. Some of those films and photographs had been taken near his barracks in Tidworth, Wiltshire. Smyth then went on holiday with his wife and two children and was caught videoing a six-year-old girl changing into a wetsuit at Whitesands Bay in St Davids, Pembrokeshire, on August 3.

The commanding officer in the Royal Electrical and Mechanical Engineers claimed he started filming children as young as 18 months for an “adrenaline rush”. Passing sentence, the judge said: “Surely an army officer has other outlets for adrenaline.”

Smyth will now lose his military career and pension. The judge told him: “You are not the usual inadequate, pathetic individual who comes before the court on this sort of charge.

“You are an extremely intelligent man who achieved a rank of lieutenant colonel, a privilege obtained by very few.

“But privilege comes with responsibility.

“You knew before how lucky you were to retain this rank but within just a few weeks you reoffended in a deliberate and cunning way.

“This had all the hallmarks of a devious and calculating individual who can only be stopped by the deprivation of liberty.”

Smyth, from Nailsea, North Somerset, admitted 16 charges of taking indecent photographs of children and being in possession of 29 indecent photos of children. He also admitted breaking a sexual offences prevention order imposed at Bristol Crown Court on May 20. Smyth was sentenced to 16 months in prison for the original offences; 10 months for taking pictures in Pembrokeshire; and four months for breaching the previous order – all to run concurrently.

In addition he was ordered to sign the sex offenders’ register indefinitely and was given a new sexual offences order, also to run indefinitely. The order bans him from swimming pools, children’s play areas and schools.