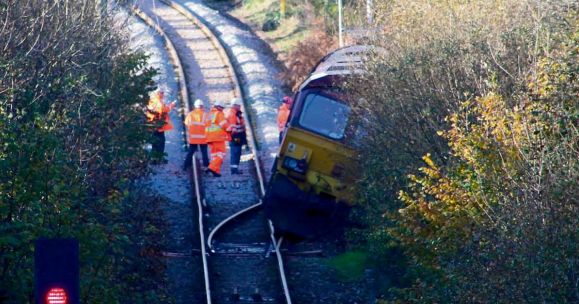 At just after 10.35pm on Wednesday an EWS Class 66 locomotive operated by DB Schenker Rail left the tracks along with the first fuel wagon, but remained generally upright, at a twenty degree angle to the tracks.

The Pembrokeshire Herald spoke to Rob Smith from DB Schenker Rail who said: “The incident occurred on the catch-points where the railway branches from the main line to the refinery. There is a recovery team at the scene, which will need to lift the train as all wheels have left the tracks.”

“There is around thirty metres of railway damaged due to the derailment but no spillage of diesel fuel has occurred” he added.

Dyfed-Powys Police spokesman told The Herald: “Police at Milford Haven can confirm that emergency services attended the track near to the Steynton railway bridge where a derailment of a slow moving engine took place late on Wednesday evening.

“No persons were injured as a result and the road has been closed between Steynton and Tiers Cross in order for Rail Track engineers to right the engine.”

A spokesperson from the refinery said in a prepared statement: “Murco Petroleum Limited can confirm that shortly after 22.35hrs, a train carrying petroleum products from Murco’s Milford Haven Refinery derailed in the Steynton area of Milford Haven, approximately 1.5 miles from the Refinery.”

The spokesperson added: “There were no injuries sustained or loss of product from the train as a result of the incident. Network Rail has now assumed control of the incident and recovery of the train, following emergency response by the police and fire services. Murco is assisting Network Rail and the train operating companies in the recovery process and subsequent investigation into the cause of the derailment.”

DB Schenker Rail added: “We are also currently investigating the cause of the incident.”

The event comes only months after a Texaco road tanker, also carrying diesel, collided with a mobile crane spilling diesel onto the road in Merlins Bridge, Haverfordwest.