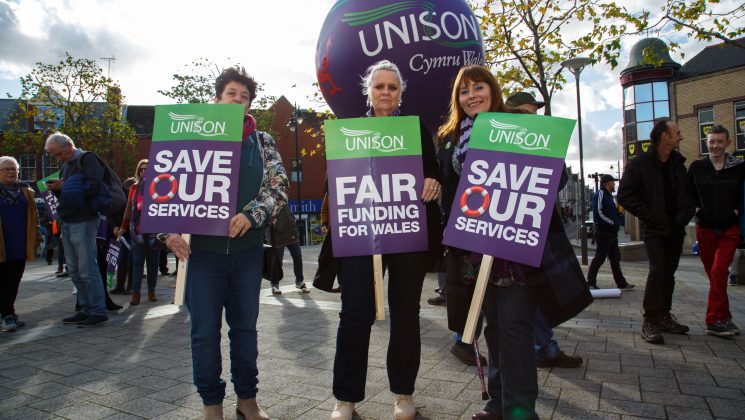 Morale in the NHS is low and falling fast: Says Nadia Probert

PUBLIC sector workers from across Wales will consider striking this winter as discontent rises about pay offers from the Welsh Government.

Disappointment, frustration, a sense of profound injustice, and growing anger at being taken for granted: all are building among those workers who have kept the wheels of essential services turning over the pandemic’s course.

And those feelings could end up in industrial action in the run-up to Christmas.
That’s the message from those representing some of the lowest-paid workers in Wales.

This week, The Herald had the chance to speak with Nadia Probert, who works for Hywel Dda UHB, Alison Boshier from Ceredigion County Council, and Dominic MacAskill, UNISON Cymru’s Regional Manager.

Despite technical difficulties, the deep hurt felt by public services workers came through loud and clear.

As Alison Boshier put it: “When everyone else was locked down, our members were the carers who went to people’s homes to look after them – including people with Covid who were not in hospital.

“Our members are the people who work on the bins. We were the people from leisure services who had to change jobs and be redeployed to keep public services going.

“Our reward for that is a 1.75% pay increase that doesn’t even keep up with inflation.”

Dominic MacAskill added: “Over the pandemic, wages have gone up by about 8%. Wages are going up by 8% and inflation at 3.9%, and our lowest-paid members are getting what amounts to a wage cut. It’s why the Government is considering changing the pension triple-lock.

“And if I can just mention our members who work in Police support services, who work in custody suites, do reception duties, and are often the public’s first point of contact with an essential service.

“The cost of living has risen by over 25% over the last ten years. Police staff’s pay has gone up by 12.2% in the same period.

“Every year it’s been a pay cut. And this, year – after everything those staff have done during Covid – another cut feels like an insult.”

We asked Nadia Probert about the difficulties in the NHS.

“At grades one to four on the NHS pay scale, which is where a lot of our members are, we have the cleaners, carers, the hotel services staff who do all of the behind the scenes work for hospital inpatients.

“They’ve worked so hard over the last eighteen months. They’re exhausted. It’s been so hard for them coming into work where their risk of catching Covid has been high. They’ve put themselves at risk and lived with the possibility they could go home and spread Covid to their families. It’s been a big weight for us to bear in the NHS.

“Morale is low. We’re all feeling the strain of staff shortages – big shortages – everyone has stepped up. And now this 3% on top. It’s left us all deflated and reduced morale even more. People have kept going through a sense of duty, but this pay award is just destroying goodwill.”

Alison Boshier added: “The same applies to our workers in social care in councils and other support services. We’re doing a tough job and have kept on going because we know how important it is for the public that we keep on going.

“But you have to ask yourselves, why should we do such demanding jobs when our members see jobs at supermarkets and other places where they can earn more money with less responsibility and fewer demands on them.”

On that point, Dominic MacAskill added: “If you look at McDonald’s, they’re offering better wages and guaranteed shift bonuses.

“Is that what the Welsh Government wants for keyworkers who’ve provided essential services in unprecedented times? That they look elsewhere, and their skills are lost to the people who depend on them.

“We’re most disappointed by the approach on NHS workers’ pay. In Scotland, the Government negotiated with unions. Although UNISON didn’t get everything we wanted for our members, we managed to get a 4% pay rise. In Wales, Eluned Morgan (the Health Minister) accepted the Pay Review Body’s recommendations when they were published.

“There was no effort at negotiation. No contact with unions. It was 3%, and that’s it. And that’s not good enough.”

Nadia Probert continued: “When staff leave, they’re often replaced by agency staff who are paid more than those they’ve replaced and those who’ve continued to work on lower wages. That’s costing the Health Board money it can’t afford to spend and hitting staff morale even harder.

“You can’t blame people for walking away and taking an easier option outside the NHS or even coming back as agency staff on more money than they were getting while they were employed by the NHS.
“Something’s got to give. It’s the lowest paid who are getting hit by rising prices. Our members feel undervalued.”

UNDERVALUING STAFF COULD END IN STRIKE

Alison Boshier picked up on that point: “It’s all about value. The work we do shouldn’t be looked at as a cost. We add value to what councils do – and what the NHS does. We are the people who provide the services that people use and that they miss most when they’re not offered or there aren’t enough workers to do them.

“It’s all about value. And our members don’t feel valued.”

We asked Dominic MacAskill about what could happen next.

“We’ve consulted with our members in the NHS, local Government, and the Police. There’s a lot of red tape involved thanks to the anti-union laws passed by this Government but if we ballot for strike action, our members vote in favour, and there’s no movement from the Welsh Government, I’d expect industrial action to start perhaps at the end of November and beginning of December.”

Just in time for Christmas, we pointed out.

“It’s not what we want,” Dominic MacAskill said, “but yes.”

The stage is set for a long Welsh winter.