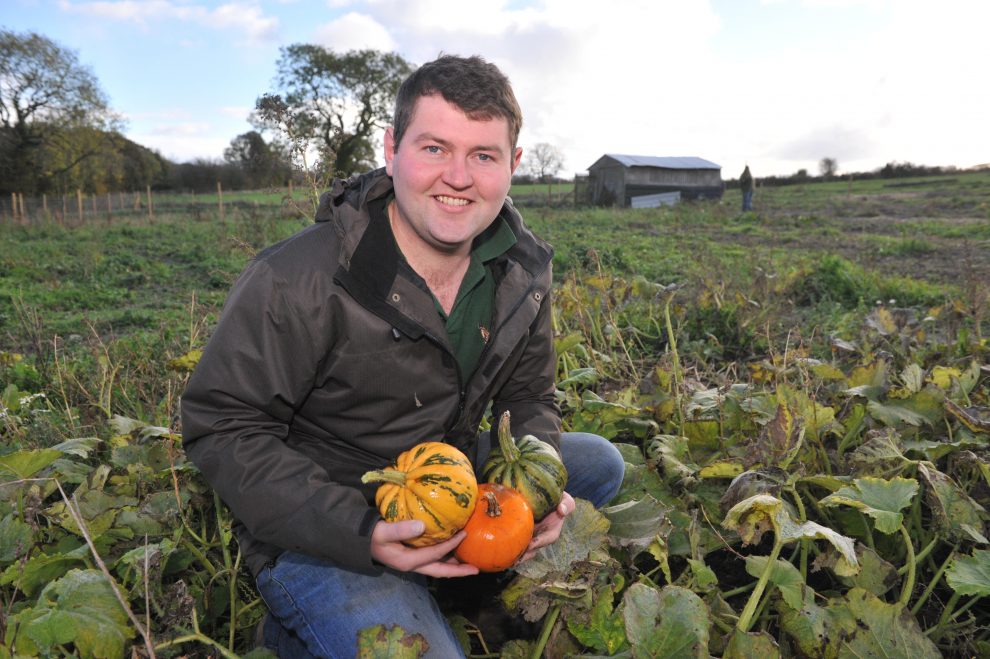 A YOUNG farmer’s resolve to make his family farm self-sufficient and remove its reliance on direct subsidy payments has been the catalyst to a highly successful horticulture diversification.

Ed Swan joined his parents, Clive and Gail, at Ffrith Farm, near the village of Treuddyn, Mold, after studying agriculture.

He made it a goal to further increase the self-sufficiency of the business – the Swans already had a well-established and thriving farm shop.

With a land base of 200 acres and a need for three people to make a living from it, further diversification beckoned.

“We didn’t want to go down the route of economies of scale, chasing high-value land, but to make what we already had to earn more,’’ Ed explains.

With that in mind he signed up as a Farming Connect focus farm, exploring options for building a farm destination experience around existing resources, supported by Farming Connect technical officer Debbie Handley.

Ed’s unintentional inclusion of a high percentage of sunflower seeds in a herbal ley mix for grazing cattle in 2021 had already sparked one idea for achieving that.

“It was a happy mistake,’’ says Ed. “Debbie recommended we looked at pick-your-own as it ties in with everything else we have here.’’

Three acres were planted with sunflowers and in 2022, 2,500 flowers were sold.

That enterprise filled a summer dip in business in the farm shop – many of their regular customers are away in the summer therefore sales can be lower.

To bolster income in late autumn, when sales can also tail off before the busy Christmas period, the farm was also perfectly placed to offer ‘pick your own pumpkins’ for Halloween.

“No questions went unanswered by Chris or by Debbie,’’ he says. “Having them come in to review the project kept me in line, they weren’t shy to tell me if I was doing something wrong and that was a good thing!’’

An area of land below the shop, previously wasteland, was drained and earmarked as the
pumpkin patch.

Ed bought 4,000 pumpkins seeds and commissioned a local nursery to grow them on to
plugs – the total cost for both was £700.

“We are 700 feet above sea level on heavy clay, I didn’t rate our chances of sowing the seed directly,’’ he says.

That approach yielded a 90% success rate after planting out.

Potash applied at 200 kg/acre cost £400 and £200 was spent on fungicide to tackle powdery mildew caused by the summer heatwave.

The business invested £200 in a fleet of 14 wheelbarrows for customers to collect their pumpkins.

Ed took charge of the weed management. “I mostly did it in the evenings, we didn’t need to get extra help in for that so there wasn’t a real cost to it.’’

When the crop was ready to be picked, customers came in their hordes, paying from £2 – £8 for a pumpkin, with many buying several.

In setting the price point, Ed struck a balance between being competitive and making a profit. “As farmers, I think we often struggle with recognising the value of what we are producing,’’ he admits.

Traffic – and people – management is another consideration he will take forward in his plans for the venture in 2023.

“Pumpkin and sunflower pickers stay a long time,’’ he says. “Our farm shop customers might park for 15 minutes but, when people come to pick, they can be here for two hours. The car park was full all the time.’’

He plans to extend car parking facilities and may also open a café in the future, as a further diversification.

The income from the PYO business has added to farm profitability, and that gives Ed confidence as he looks ahead to the eventual removal of the Basic Payment Scheme (BPS).

Although the Sustainable Management Scheme (SMS) is heavily weighted towards environmental goods, he believes farmers shouldn’t need a financial incentive to work with the environment.

Of the many measures he has in place to support wildlife and biodiversity is leaving his sunflower crop in situ over winter, as feed for birds.

“It is our environment as much as anyone’s, I don’t think we should expect to be paid to look after it. It shouldn’t be the only reason why we are making progress,’’ says Ed.