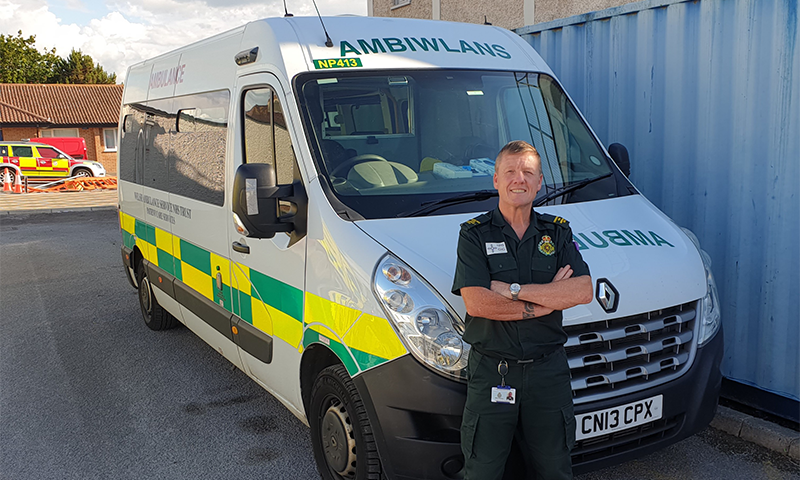 A WELSH Ambulance Service worker is cycling from London to Paris to raise money for the Wales Air Ambulance charity.

Mark Holmes, 55, an Ambulance Care Assistant for the Trust’s Non-Emergency Patient Transport Service, based in Llandudno, will be taking on the challenge in August.

After a serious cycling accident in July 2021 whilst triathlon training, Mark is back on the bike and is ready to cycle over 200 miles.

Mark said: “It was a routine bike ride, and then a car came through a no entry road and I had to brake hard to avoid a collision.

“I went over the handlebars and landed on my head.

“I had a range of injuries including to my neck and head, but also my right wrist was knocked out of position, along with multiple grazes and scratches.”

Mark started working for the Trust in February of this year, but it would have been sooner had it not been for his accident.

He said: “The week of my accident I had an interview for the Emergency Medical Technician post, but my injuries put me out of the field for that, and up came the jobs for NEPTS and I thought ‘let’s do it.’

“Becoming an Emergency Medical Technician is still an option, but I love my current job.”

Mark will be cycling to raise funds for the Wales Air Ambulance charity, which relies entirely on public support to keep their helicopters flying.

Although Mark didn’t require the Wales Air Ambulance, he was told they were ready to come to his aid.

He said: “After my recovery, I realised how important the Wales Air Ambulance may have been if my injuries had been life-threatening.

“They were ready for the call if I needed it.”

Mark’s not only raising money for the charity, but also doing it for his own mental health.

He added: “The worst part about the accident was it totally knocked my self-confidence.

“Cycling is something I’ve done for the past 10 years or so and it’s certainly good for my wellbeing.

“I’m happy to be back on the bike, but it did take me nearly 12 months to gain any confidence back.”

Joseph Lewis, Operations Manager for the NEPTS in North Wales, said: “We are all behind Mark and wish him all the best for this astounding adventure.

“It is such a worthy cause he is supporting.”

Mark will be starting his journey on the 11 August with 35 other people, who are cycling for a range of other charities.

You can sponsor Mark via his Facebook Just Giving page here.

RSPCA branches across Wales have joined together to form a national food bank.

Siblings raise over £200 for charity that saved cousin’s life