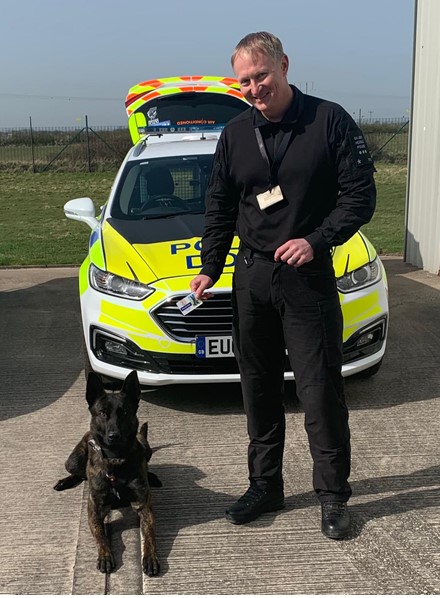 DOGS from the North Wales Police and Cheshire Alliance Dog section have now been issued with individual collar numbers and ID cards.

The decision to introduce collar numbers was taken following the passing of Finn’s Law in 2019.

This was an initiative which saw PC David Wardell of Hertfordshire Police campaign tirelessly for the better protection of service dogs after his dog, Finn, was stabbed whilst pursuing a suspect. Finn sustained serious stab wounds to his chest and head, but only criminal damage charges could be brought against the attacker.

Finn’s Law was eventually passed through parliament, which means that anyone who causes unnecessary suffering to a service animal whilst in the commission of its duties will be able to be charged under Section 4 of the Animal Welfare Act 2006 and will no longer be able to hide behind the defence of fear.

This new legislation, coupled with the government’s plans to increase maximum sentences for animal cruelty offences to five years in prison, will make sure those who harm service animals are punished accordingly.

Traditionally, a collar number is issued to an officer at the start of their career an is their unique identification number to the police force in which they serve.

The collar number is clearly displayed on their epaulettes – which are worn on the shoulders of their uniform. All dogs will now be provided with a PD (Police Dog) collar number, which will be displayed on collars and harnesses.

Chief Inspector Simon Newell said: “The Alliance police dogs play such a vital role in daily, operational policing – from finding missing or vulnerable people, to tackling serious and organised crime, including drug supply. Handlers and their dogs form a unique bond and we’re proud every day of the fantastic work that they do, it’s only right that they are recognised in this manner.

“In recognition of Finn’s Law, all of the Alliance police dogs have now been allocated individual PD collar numbers to give them equal status in terms of identity to police officers, and reflect the important role the dogs carry out as part of the wider policing family.

“To reinforce this, we have issued each Alliance police dog with their own warrant card and collar displaying their PD number, giving them a greater sense of identity.”

According to the group which led the campaign for this law, more than 100 other service animals have been injured since 2012. This includes injuries such as being as being stabbed, hit with a scythe, beaten with an iron bar, kicked and hit by a car.

Chief Inspector Newell added: “A number of the Alliance police dogs are also trained as a less lethal tactical option in support of firearms incidents.

“The provision of body armour for the dogs is therefore necessary to minimise the risk of harm by maximising the level of protection to them, as we wouldn’t send our police officers out to face danger without the appropriate protective equipment, and the same should be said for our police dogs.

“Over the last 12 months the Alliance have been trialling body armour to identify the most suitable in terms of protection (ballistic and stab/spike resistant) and comfort to ensure the dogs movement, agility and speed is not compromised.

“To give our dogs the best possible protection, all of the Alliance General Purpose dogs have been individually fitted for their new body armour and we will soon be taking delivery of the new equipment.

“This shows a real commitment from both Cheshire and North Wales Police to recognise the value of and protect their prize assets…..the police dogs.”

Disruptions to rail passengers likely to continue after cracks found