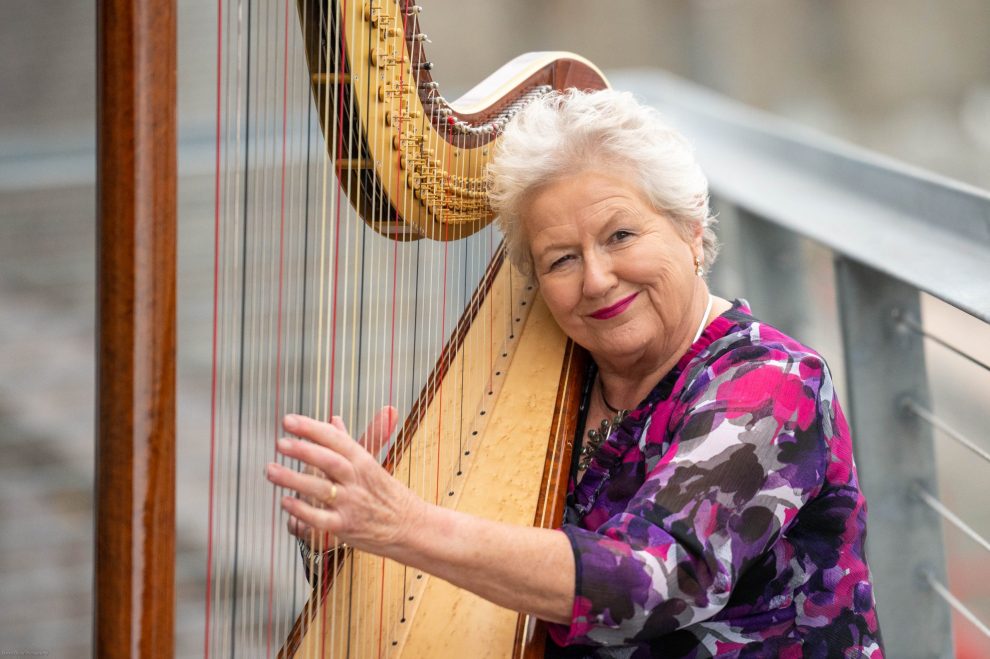 THE FOUNDER of an international harp festival will be signing off in style with a long goodbye.

Renowned harpist Elinor Bennett will be centre stage at a special concert to launch the Wales International Harp Festival next spring.

The launch concert will be taking place at the Pritchard Jones Hall at Bangor University at 7.30pm on Saturday, October 22, celebrating 55 years of performing by Elinor and the 100th anniversary of the university’s School of Music.

It will feature pieces played over the years by Elinor, who has been the festival’s Artistic Director since 1978 and also signal the end of her tenure in the post.

After the launch, Elinor will embark on a tour of 12 concerts and masterclasses across Wales where she will be playing with different harpists – most of whom she has taught – at each venue.

The aim of the tour is to drum up interest in the harp among young musicians and encourage harpists of all ages to compete at next year’s festival.

Approaching a significant birthday next April,  Elinor, who lives in Bontnewydd near Caernarfon with her husband, former Plaid Cymru President Dafydd Wigley, said it was time to step back and allow someone else to take over the reins.

Looking forward to the launch concert, she said: “There’s a varied programme which I hope will appeal to everyone and also raise awareness of the harp festival itself.

“This will be my last harp festival, I’m not going to do any more organising after this one and the baton will be passed onto someone else.

“I don’t know who yet but there are many, many people who have the ability to take it on but I want to go out with a bit of a bang.”

Elinor will play the famous Concerto for Harp by Handel with the Bangor University Ensemble and the programme will also feature The North Wales Harp Ensemble, conducted by Tudor Eames who was a pupil of Elinor.

Meanwhile, the Gwynedd & Anglesey Youth Brass Band will perform alongside the Society of Triple Harpists and Côr Seiriol .

Elinor added: “The artistes taking place have some connection with myself over the years. I’m pleased that Aled Wyn Davies, the acclaimed tenor, from Llanbrynmair. His grandparents once lived in the farm where my parents lived.

That is under Llyn Clywedog  now but I was able to go down there with Aled in the summer after the water levels dropped and was able to see the building again. So he’s coming  to sing and that will be lovely.

“Soprano Mary Lloyd Davies is from Llanuwchllyn where I spent a large part of my childhood.

“The other soloists are Mared Emlyn who will play a concerto by Debussy on the harp and flautist Rhiannon Mathias. She is of course the daughter of William Mathias and the connection with him is very important.”

She said the programme is varied because her career has been quite varied ranging from classical performances as a soloist and with orchestras to accompanying rock musicians on various albums.

“I wanted it to be as varied and as accessible as it was possible to be,” said Elinor.

The pre-festival tour called Dwylo ar Dannau’r Delyn (Hands on Harp Strings) will include masterclasses conducted by Elinor and some of her ex-students and colleagues, held in community locations throughout Wales, to promote the festival and  re-ignite interest in harp music following the Covid pandemic.

The fifth Wales International Harp Festival will bring together leading exponents of the instrument from around the world to Galeri Caernarfon from April 5-11, 2023.. Organised by  Canolfan Gerdd William Mathias (William Mathias Music Centre), it will feature concerts,  masterclasses, workshops and lecture recitals.

According to Elinor, performances will be given by world-class artistes representing various aspects of the harp spectrum.

“The Latin-American harpist from Colombia,  Edmar Castaneda, will share a concert with Welsh harpist, Catrin Finch.

The great French artist, Isobel Moretti, returns to Caernarfon to perform the  classics of the  French harp repertoire.  It will be wonderful to welcome back the iconic  Deborah Henson-Conant from the USA, to  present a jazz and improvisation evening in her own inimitable way.

“Retiring President of the United Kingdom Harp Association, Sioned Williams, will present a lecture-recital on John Thomas, Pencerdd Gwalia, a composition workshop will be given  by John Metcalf,

“Written for a chamber ensemble and vocal soloists, it will celebrate the unique culture of the slate-mining areas of Gwynedd, recently awarded World  Heritage Status by UNESCO,” said Elinor.

Harpists are also invited to take part in four competitions at the festival, with the aim of giving children and older harpists a platform to perform, receive comments from internationally esteemed harpists  and make friends with young musicians from other parts of the world.

The closing date for applications for the competitions is January 2, 2023

“From the Chief Musician competition to the young harpists’ section, there are opportunities for many varied styles and genres, including the World Music  competition on any kind of  harp from Celtic to Triple and Kora to pedal..

“Participants in each of the four categories  are encouraged to create their own choice of programmes, and include one or two items listed in the published syllabus.

Elinor said: “In the youth and children competitions, equal scholarships will be awarded for the three top performances, to help talented young harpists to receive continuing expert tuition.

The Wales International Harp Festival team is extremely grateful for the support given by Camac Harps  and Telynau Vining and for sponsorship from many funding bodies including the Arts Council of Wales, Ty Cerdd and Colwinston Charitable Trust and invites anyone interested in sponsoring scholarships and prizes at the Festival to get in touch.

“Please join us over Easter in Caernarfon for a joyful and enriching experience.”

Details about the launch concert, the tour and the competitions are available on the Festival website www.walesharpfestival.co.uk