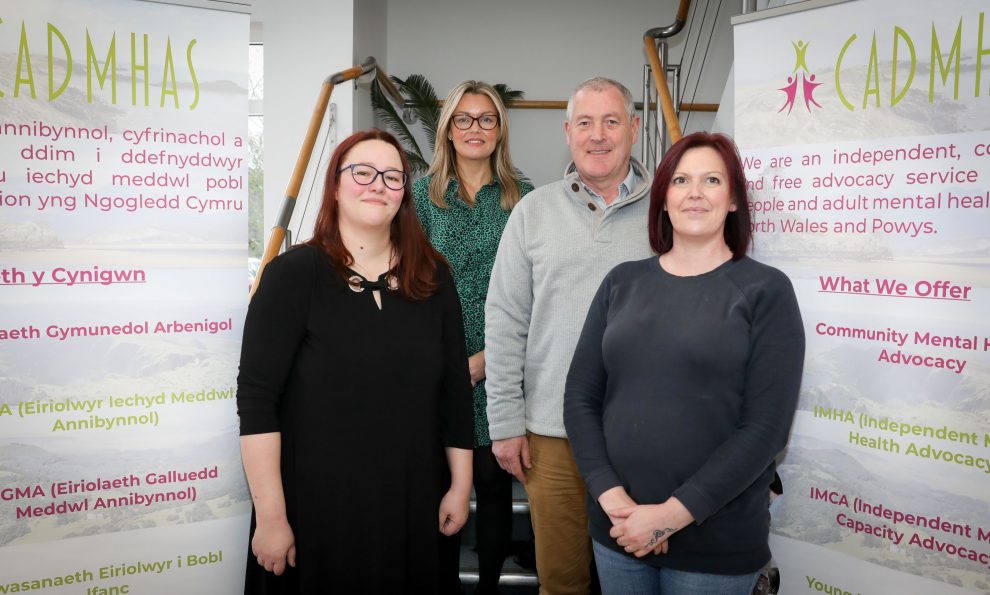 AN INDEPENDENT service which fights for the rights of people in North and Mid Wales with severe mental health issues is taking on 15 new staff to deal with an explosion in its caseload.

CADMHAS – the Conwy and Denbighshire Mental Health Advisory Service – now services a vast area covering all of North Wales and Powys, more than half of Wales.

It is part of the UK-wide independent advocate system set up in the wake of the Harold Shipman murders, the Greater Manchester GP who is estimated to have killed over 250 elderly and vulnerable patients at his practice in Hyde between 1977 and 1998.

CADMHAS deals with 1800 cases a year with a large proportion of those for people, many elderly and suffering from dementia, who have no family and lack the capacity to make vital decisions on where and how they live, all on a budget of £1.2 million.

Its headquarters on St Asaph Business Park is the hub for a network of trained advocates who act for vulnerable people who struggle to make their own health and welfare decisions and without family able to step in.

Its efforts have been praised by Lynette Viney-Passig, of leading law firm Swayne Johnson, a CADMHAS board member for over ten years who said: “The service that their dedicated team provide is so important and yet so little is known about it.

“It is a testament to the quality and dedication of their work that they have grown to cover not just Conwy and Denbighshire but such a huge area of Wales and with amazing dedication.

“Without them so many of the most vulnerable people in our society would have no-one to safeguard their interests, no-one to make sure their voice is heard and their well being safeguarded.”

CADMHAS Director of Services Elfed Williams now leads a team which will have grown to 48 by the end of 2023 – in 2013 there were just six with the number up to 19 last year as their services expanded to deal with a rocketing caseload.

All advocates have to gain a Level 4 advanced qualification provided by City and Guilds for a course of a minimum of 12 months, mostly taken online, and CADMHAS are currently advertising for more advocates.

This small but growing army of dedicated professionals deal with increasingly complex and sensitive cases and he said: “As well as people suffering from dementia we also support people with anything from depression and anxiety up to those who have been sectioned under the Mental Health Act or have severe issues like schizophrenia or serious brain injury.

“The majority are those with severe learning difficulties and increasingly with dementia as people live longer but it is anything that causes them to lack or lose capacity to take care of themselves.

“We are seeing an increasing number of people being referred to us and this could also be down to Covid and the greater isolation it has imposed which has been detrimental to so many people’s mental health.

“The cost of living crisis is increasing anxiety and mental well-being has been affected by factors like the lack of medical and social services while other voluntary organisations which might have helped in the past have seen funding shrink or disappear.”

North Wales was also seen in the past as an ideal place to house young people with special needs and local authorities from across England would pay for them to be housed in residential homes across the region.

Many have been here for over 20 years but according to CADMHAS the economics of the system have changed and many local authorities are looking to save money by repatriating their former residents.

Kate Ross-Bowker, an experienced Independent Mental Capacity Advocate from Anglesey, said: “This was seen as a nice area with wide open spaces where people could be looked after in tranquil surroundings.

“But now the economics have changed and some local authorities are saying they can now look after them better themselves and more cost effectively closer to where they were brought up.

“This is where it is vital to have an advocate who can evaluate the situation and speak on behalf of the resident.

“We don’t make the final decision but we are there to be the voice for that person who doesn’t have anyone else to speak on their behalf, we are there to fight for what we think is in their best interests.

“This doesn’t just cover where they live and how they are cared for but can cover what medical treatment they receive – there may be medical reasons for a treatment but we also have to evaluate the personal circumstances of that person.”

Elfed Williams added: “People are often unaware of the service we provide but we need more resources because the need is growing.

“The cases we are seeing now are much more serious and much more complex than they were in the past.”

Swayne Johnson is a long-established law firm which employs over 50 staff at offices at Ruthin, Denbigh, St Asaph, Llandudno and Tattenhall in Cheshire and is one of the fastest growing firms of solicitors in the region.

For more on Swayne Johnson go to http://www.swaynejohnson.com/