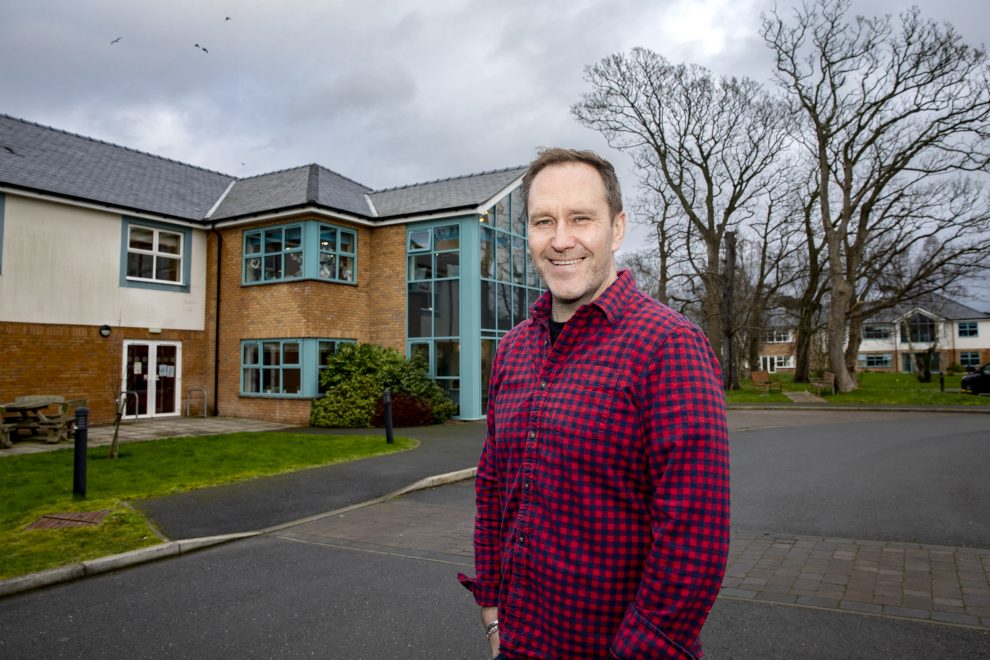 A POPULAR Welsh TV soap star and singer has taken on a new starring role – at a care home in Caernarfon.

Well known actor and S4C favourite Emyr Gibson told how the career move was one of the most surprising of his life, but one about which he has no regrets.

He has been bowled over by the way his acting skills and musicianship fuse perfectly with the demands of his new job working within the enrichment therapies team at Pendine Park’s Bryn Seiont Newydd.

Emyr works three days a week, six hours each day, as the actor-in-residence at the award-winning Bryn Seiont Newydd.

He works closely with the home’s talented musician-in-residence Nia Davies Williams and other enrichment staff to provide a varied and therapeutic programme of arts, crafts and music activities for residents living with dementia.

He is also a familiar face from gritty TV dramas Hidden and Forgotten Journeys.

In addition, he is an accomplished tenor, having for the last nine years performed all around Wales with musician friends, baritone Bedwyr Parri and bass Steffan Owen, in their group Trio Cymru.

His venture into the social care sector is in part a result of the impact of the pandemic on the arts world and the lack of live performances over the last two years.

As a primarily self-employed person living with his wife, Sarah, a Radio Cymru producer, their two children Eos Fflur, five, and Casi Eirlys, three, and the family’s pet dog Flei, he said he pro-actively looked for new job outlets as work in the arts field dried up.

He said: “If anyone had told me a couple of years ago that I would be working in a dementia care setting I simply wouldn’t have believed it.

“But if the pandemic has taught me anything it is to live in the moment, be prepared to make changes and open our minds to adapting our lifestyles to what is happening around us.”

He is always ready to rise to new challenges, of whatever shape or form.

He works closely with local schools on an Arts Council for Wales funded project aimed to boost pupils’ confidence and learning skills through developing creativity.

He also recently and triumphantly co-founded an Anglesey-based gin distillery, Afallon Mon, in partnership with two friends, Arwyn and Gethin Owen. Their artisan Celtic gin won a Best in Wales and Best in Britain accolade in The Gin Guide’s 2021 industry awards.

But Emyr confessed that of all his recent enterprises his journey into adult social care began with some trepidation.

He said: “I was looking at potential new ventures and career challenges during the quiet period of the pandemic lockdown when I came across an advertisement for a position as a care practitioner with Bryn Seiont Newydd. I applied but I admit that I did have some second thoughts when I was contacted about the position.

“Pendine Park discovered I had an arts and music background and they offered me a place in the enrichment team. We chatted about it and I agreed to give it a go.

“Now I’m here working with such a great team I can see how it wasn’t that big a leap after all. My acting and music fits in well with the aims of the enrichment activities programme and I’m really enjoying learning new skills in a different environment to that which I’m used to and working so closely with the residents.”

Emyr is thrilled that the job gives him the chance to sing regularly again.

He said: “As a professional singer it’s hugely important to exercise the voice, to practice as often as possible. It’s a bit like a powerlifter, lifting weights. The more you do it the stronger you get.

“When so many performances were cancelled during the various lockdowns the opportunities for us to sing in public were dramatically reduced. We lost our audiences and with that the chance to sing professionally. So coming here and singing for the residents has been a blessing. It has really helped me discover my voice again.”

“I can see with some people how their faces light up and precious memories suddenly come alive. It’s like a form of meditation, they are living in the moment. If I can help that happen even for just a short time it’s so rewarding to witness and to be able to bring pleasure to their day. For me being involved in creating this new type of musical experience is a joy to be a part of.”

She said: “The arts and culture have always been an integral part of everything we do to enrich the lives of our residents and staff alike.

“Emyr has greatly strengthened our already wonderful enrichment team. His wonderful tenor’s voice really does have star quality. We’re delighted that he agreed to take on such an important role with us.”