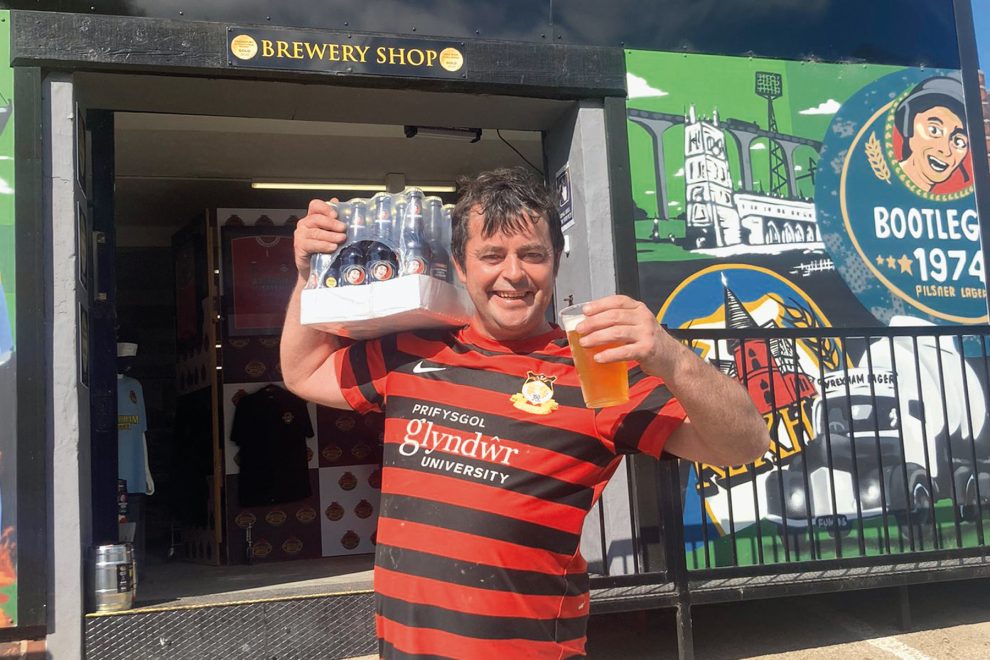 Social media sensation and Wrexham AFC superfan Bootlegger has made a shock admission – he wasn’t keen on football as a young lad.

The revelation comes in his outspoken autobiography, Bootlegger: The Good, The Bad and The Tasty, in which the legendary Twitter icon and vlogger, whose real name is Karl Phillips, charts his amazing journey from teenage tearaway to global instagram and YouTube hero.

He tells the remarkable story of how his life has transformed massively since he was initially classified as a slow learner at school, and his unmanageable behaviour caused his mum to kick him out.

These days the self-confessed hard-drinking, job-hopping loose cannon has amassed around 333,000 Twitter followers and one of his most watched YouTube posts topped 700,000 views.

Described by ex-Wales international Robbie Savage as “one of Wrexham Football Club’s most famous fans”, the Daily Star newspaper called him a “social media giant”.

He has also had the rare honour of having a beer named after him – Wrexham Lager’s Bootlegger 1974 – which has made its way onto high street supermarket shelves.

He is “over the moon” that his long-time football idol – former Wales international Mickey Thomas, who played for clubs including Wrexham, Manchester United and Everton – has penned the foreword for the book.

Mickey, who in turn is a fan of Karl’s infamous ‘Bootlegger’ persona, says: “I’ve been following this man’s rise in popularity over the last few years ‘n’ couldn’t have been happier when I heard he’d blagged a book deal! ‘Top man’ are the words that came to mind when the publishers approached me and asked me to write a Foreword.

“Every time I look at his Twitter account, he has a few extra thousand followers. How does he do it? I’ve figured it out – it’s no act, he’s just himself. He’s a natural.”

Mickey adds: “I’m lucky enough to be one of the first people to have a read-through of this book and I can tell you now – you’re gonna be spoilt. I thought that I’d lived a colourful life until I read about Karl’s different adventures around Wales and beyond.”

The straight-talking no-holds-barred autobiography published today (Tuesday, March 15) highlights Karl’s much-loved and often wild sense of humour, which has earned him such a huge public following, particularly among the ever-growing Wrexham AFC fanbase.

But although it is written with a light touch, the book also gives rare glimpses into hardships and sad times which Karl endured in his early years after being born in 1974 to young parents – both aged just 16.

After a spell living in a flat above Family Fashions shop in Coedpoeth, they secured a council house in Heol Glyndwr, Wrexham, where they scraped a living. Karl and friends would spend their time mischievously hopping over neighbours’ hedges, knocking on doors and running away. But when he was still at primary school, his parents split up and his dad returned to his native Ireland.

Karl struggled at school and became increasingly wayward, to the point where his mum could no longer cope.

He said: “It took me longer than others to adapt to school, and I was in a class dedicated to the slower learners… The highlight of my day was winding the teachers up… It was all one big game to me, and I was often found outside the headmaster’s office.”

He added: “Quite simply I underachieved because I was more interested in being Jack the Lad.”

His relationship with his mum became increasingly fractious and eventually he went to live with his uncle in Gwersyllt.

He said: “My mother turned up at the office in St Joseph’s School and I was summoned. There she was, holding two black bin bags full of the sum of my worldly goods. She dumped them on the floor and walked off. I was lucky not to end up in the care system.”

Now aged 40 and a father himself, he admits he did not make life easy for his mum: “Now, knowing the other side after becoming a parent myself, I understand more about the strain of bringing up children. What a pain I must have been! Eventually the strain on Mum was too much.”

While he is grateful that he had more stability and felt a much-craved sense of security living with his uncle, his tendency to live on the edge continued unabated. It led him into an array of financial difficulties and minor scrapes with the law.

He says writing the book was a huge challenge but a form of therapy too, offering the chance for him to reflect on past mistakes and misdemeanours.

They include high adventures at home and abroad. He talks of trips to Jamaica, Thailand, India, Spain, Malta and France, among other worldwide destinations.

He talks of making a scary off-road trip to the ganja fields of Jamaica, getting embroiled in a drunken hotel brawl in Andorra, over-indulging on local delicacies which left him with violent food poisoning in Thailand, and being caught by customs with a case full of excess cigarettes from India.

According to Bootlegger, he was never much of a football enthusiast as a boy, saying: “Football wasn’t really on my radar as a young lad. I was too busy ducking and diving.

“In all honesty, I was more interested in going out gallivanting with my mates in the Nineties and doing what young lads do.”

But his passion for Wrexham AFC really grew after the club was relegated from the football league, when he developed an interest in making and editing videos and “acting the goat on social media”.

He said: “After a few videos of just larking about, I went on to vlog my match-day experiences. My first was for a home match – Wrexham v. Cambridge. I uploaded the video and titled it ‘Bootlegger MOTD’. It gained a bit of a cult status amongst the Wrexham diehards. Before long, I found myself interviewing various locals.

“I got the knack of editing and embedding graphics. I really did think I was going to be Wrexham’s answer to Steven Spielberg.

“I created different characters, like Bubba Ball Bag and Taffy. These were the main protagonists. But there was one character that didn’t require so much acting. He was ‘The Bootlegger’, AKA The Captain. The Captain would attend games proudly wearing the red Wrexham shirt and a brown leather jacket, which I christened ‘The Italian Pigskin’. The Italian pigskin wasn’t from Italy and I doubt it was even made of leather, but the rain wouldn’t half bounce off it.”

He now posts from home and away games, interspersing his raucous commentary with rollicking tales of his home life.

By day Bootlegger is self-employed as a roofer, a job he admits he fell into as a young man after being sacked from or quitting an array of other jobs. They included various labouring roles at a plastics factory, a cheese factory, as a street cleaner, working for Rowan Foods, and doing 12-hour shifts at the Wrexham Wire factory. His commitment to employers was limited and he never stuck at anything for long, often returning to odd jobbing as a roofer between other employment.

He says: “When I look back at how easily I flitted from one job to the next, I realise that I was very lucky.”

Still living in Gwersyllt with partner Claire and their son Iwan, he says he never planned to become a social media star but that his philosophy has always been: “When life throws any opportunities your way, you need to grab ’em while you can. They say ‘God loves a trier’ and I tell you what – I love ’em too. I’ve got a lot of time for anyone who tries to make things happen. I admire anyone that’s got a bit of fire in their belly.”

He adds: “In the world we live in today, being different isn’t a bad thing, but I was written off by so many people over the years. I’ll admit I’ve been no angel.

“While I’ve learnt the hard way, I’ve got no regrets. I’ve made plenty of mistakes over the years, but let it be known: some mistakes are worth making.”

He was dumbfounded when offered the chance to publish his autobiography but he believes there are a lot more tales in him yet.

He said: “I’m only in my late forties and becoming a father in extra time has made me realise that I need to calm down a bit (only a bit, mind!). So hopefully I’ve got another book in me before I reach the ol’ back kitchen in the sky.”