Home > Politics > What powers does the Senedd have, and what can only be decided in Westminster?
Politics 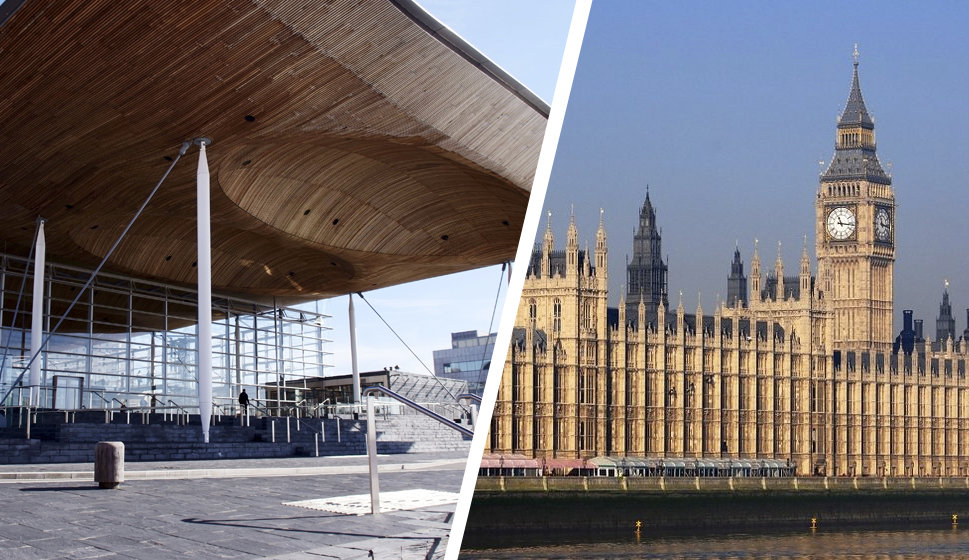 The COVID-19 pandemic has brought many issues to the forefront of people’s minds, one of which being the difference in power between Westminster and the Senedd.

While many in Wales expected Boris Johnson to guide us through lockdown and beyond, it’s actually been Mark Drakeford who has been calling the shots.

Drakeford has been notably more – dare we say – conservative than Johnson, with a slower end to lockdowns and more recently a refusal to match England’s proposed timetable out of our current lockdown.

So while Boris is still on Welsh TV, but much of what he says doesn’t apply to us.

If you pay attention to politics, this won’t be a shock, but over recent months many who are not so politically inclined have realised that the Senedd controls more in Wales than they believed.

So how far does their power go?

To understand that, we have to look at the last twenty years and how they shaped the Senedd we know today.

In response to increasing calls for change, the Assembly resolved in 2002 to separate the functions of executive and legislature.

The term ‘Welsh Assembly Government’ began to be used to describe the policies and actions of the Cabinet, allowing the term ‘National Assembly’ to refer to the scrutiny, representative and legislative work of the legislature.

In 2002, the Commission on the Powers and Electoral Arrangements of the National Assembly for Wales was established. Known as the Richard Commission, in 2004 it recommended the legal separation of the executive and legislature as individual legal entities, the devolution of primary law-making powers to Wales, and an increase in the number of Members.

The majority of the Richard Commission’s recommendations were accepted by the UK Government, and given effect by the Government of Wales Act 2006.

The Senedd building was opened by the Queen on St David’s Day 2006.

Designed by the Richard Rogers Partnership, the building makes extensive use of Welsh materials like slate and oak. It also embodies in physical form the values that underpinned the National Assembly, including environmental sustainability, transparency, and openness.

Following the third Welsh General Election, Assembly Members met in a National Assembly that had been formally separated from the Welsh Government by the Government of Wales Act 2006. This new settlement also gave the Assembly the power to make primary legislation for the first time.

Through separation, the 2006 Act clarified the roles of each institution. The National Assembly made laws and represents the interests of the people of Wales. The Welsh Government (the First Minister, the Welsh Ministers, Deputy Ministers and the Counsel General) became responsible for making and implementing decisions, policies and subordinate legislation.

On 4 March 2011 the Welsh electorate voted in a third devolution referendum, this time on whether or not full primary law-making powers should be extended to the National Assembly in those areas over which it had responsibility. This time 63.5% of voters supported further devolution.

The UK Government established the Commission on Devolution in Wales, known as the Silk Commission, to consider the future of the devolution settlement in Wales.

As a result of the Part I report, the UK Government introduced the Wales Act 2014 which bestowed a number of new financial powers on Wales, including taxation and borrowing powers.

The Wales Act 2017 established the National Assembly on a new constitutional basis, making it a permanent part of the UK constitution.

The 2017 Act moved the Assembly from the conferred powers model to the reserved powers model. Among the new powers Wales’ devolved legislature had responsibility for was the power to decide its own name and the voting system by which its Members are elected.

Last year, after 20 years, the National Assembly was recognised as a fully-fledged parliament after the Senedd and Elections Act (Wales) 2020 became law. This changed its name on 6 May 2020 to Senedd Cymru or Welsh Parliament to fully reflect its constitutional status as a law-making and tax-setting parliament.

So, after all of these changes, the Assembly can implement laws that affect:

· fire and rescue services and the promotion of fire safety

However, the following is still controlled by Westminster:

The obvious question has been on many lips in recent times: is Welsh independence inevitable given the continued progress made in the Senedd?

Scotland has had an unsuccessful referendum, but that hasn’t stopped the idea from gaining traction in Wales.

Most notably, in the form of YesCymru, whose membership has jumped to 17,000 as of January, and continues to steadily grow.

When compared to the 2,000 who were registered at the start of 2020, that figure becomes even more impressive.

Charman Sion Jobbins has achieved this, he says, by working to reach people who otherwise wouldn’t be politically engaged – ranging from the young to the working class.

In a, which proclaimed that “Independence for Wales is on the rise,” Sion said: “Support for independence is the strongest it’s ever been, with 33% of the people of Wales now saying that they would vote for Welsh independence if a referendum was held tomorrow. That’s a 6 point increase from January, and a massive 11 point increase since December last year.

“It’s very clear that more and more people are coming to the conclusion that Westminster doesn’t work for Wales. We’ve seen this not only with the poll results, but with a huge surge in YesCymru membership, recently hitting 15,000 paid up members, where we were at around 2,500 in January. That’s more members than nearly every political party in Wales.

“In light of Boris Johnson’s comments on devolution being ‘a disaster’, and our recent poll that showed 59% would vote for devo-max in a referendum – a move that stops just short of independence – it really is time for the Welsh Government to get serious about what it wants to happen, and make its constitutional position clear. The status quo just isn’t an option anymore.

“People want change, but that change won’t come from Westminster. Change is happening in the minds of people across Wales, but with the Senedd elections on the horizon, it needs to be reflected in the members voted into the Senedd. Wales has to vote for people who won’t wait for orders or favours from Westminster, we have to vote for the change we want.”

Plaid MS Helen Mary Jones in the Senedd asked him herself.

She said: “Given how Wales has faired for many decades, through the Thatcher years in the 1980s, 15 years of a Westminster Labour Government that didn’t reform the Barnett formula, leaving Wales worse off, 11 years of Tory-led austerity and now the disgrace that it is the shared prosperity fund, does the First Minister now accept that it is decades since the redistributive potential of the United Kingdom, to which he often refers, has come anywhere near to being fulfilled?

“And does he now agree with me that it’s time for us here in Wales to look after ourselves and each other, using the economic levers available to an independent nation to rebuild our economy and end poverty?”

“It is absolutely possible to use the United Kingdom as an engine for redistribution, and the last Labour government demonstrated that year in and year out.

“The temporary failure of the current occupants of power at Westminster to do that should not be confused for an argument that the system is incapable of delivering what I believe it is capable of doing and which will be in Wales’ interests.”

However, as the Senedd’s power grows, and the population of Wales gets used to Cardiff calling the shots over Westminster, Drakeford’s opinion may not be the popular one for long.

The State We’re In