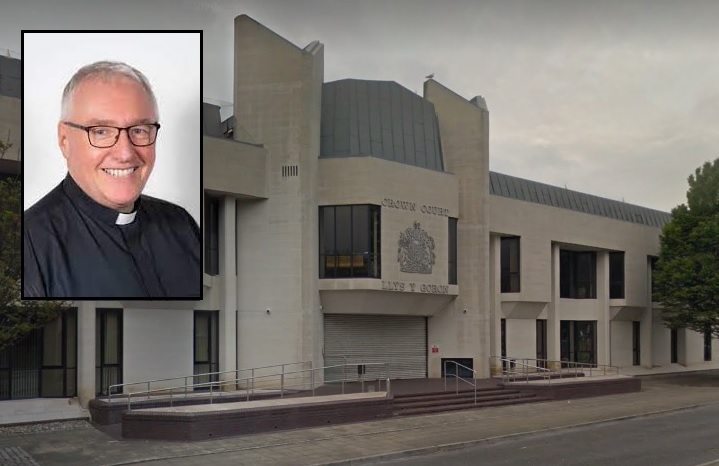 A VICAR who was found to have hundreds of indecent images of children on a number of devices has been told he failed his parishioners “horrendously”.

The Rev Canon Nigel Cahill, the Rector of Aberavon, was suspended from his duties after being arrested at his Port Talbot home in June last year.

Swansea Crown Court heard how police carried out a warrant at the home of Reverend Canon Nigel Cahill, who held a “prominent and trusted role” as the rector of Aberavon and the parish priest at St Agnes Church in Port Talbot, on June 25 last year after officers were informed that an image of a child had been uploaded from an internet source at The Rectory.

The 61-year-old pleaded guilty to two offences of making indecent images of children between 2016 and 2020 at a previous hearing.

At a hearing at Swansea Crown Court on Monday (Apr 19), Cahill appeared for sentencing for making indecent photographs of a child – 216 in Category C between July 22, 2016, and June 26, 2020, and a further three in Category B between February 2, 2016, and June 26, 2020.
During police interview Cahill accepted the devices on which the images were found belonged to him and went on to say that he “had a problem that had blighted his life” but due to his “highly emotional state” he would not answer any further questions.

Jon Tarrant, mitigating, said: “On a pro-rata basis just over 1% of the images were Category B. The charges also span over a four-year period and in the context of many cases that comes before the court it is at the lower end. Ten months have passed now since the commission of these offences and his world has fallen apart. His relationship with the church has been damaged and he knows the impact of his offending to the community around him. His remorse is evident. There is no ambiguity – he has accepted from the start his position.”

Judge Paul Thomas QC said Cahill would suffer significant public disgrace and prison was not appropriate due to Cahill’s lack of previous convictions, but the vicar had let a “large number of people down”.

The judge said: “You are, Mr Cahill, an intelligent man who knew at all times how wrong it was you were looking at these disgraceful images.
“It’s commendable fter your arrest you sought help from Lucy Faithfull organisation but it would have reflected better on you if you had done so before your arrest.”
“They will feel a sense of betrayal by a man they looked up to and relied on for spiritual guidance” he said.

The Church in Wales said it was “deeply saddened and shocked that one of its clerics had committed such a serious offence”.
“We hold all victims of child abuse in our prayers”
“Cahill will be referred to the Disciplinary Tribunal of the Church in Wales, and the community had been provided with pastoral care.
“This was a crime committed despite our stringent safeguarding policies and procedures,” it said.
“Mr Cahill exploited the trust and respect put in him as a cleric by the Church in Wales and by his parishioners and that will have long-term implications.
“There is no place for any form of abuse in the Church in Wales.
“We want to make sure the Church in Wales is a safe place for our children to grow and to be nourished in the Christian faith.